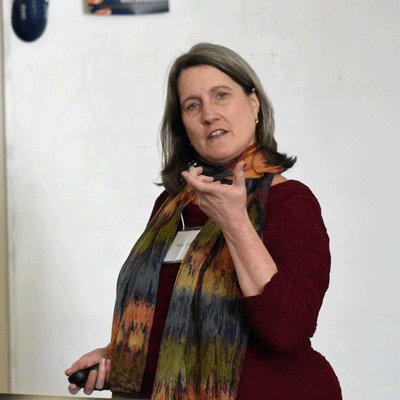 LOUISVILLE — Presbyterian Disaster Assistance took part in an online teach-in Monday as part of an effort to get the United States to end policies that make it difficult for asylum seekers at the country’s southern border to find safe haven.

PDA’s Susan Krehbiel spoke briefly during the virtual event by the Interfaith Immigration Coalition, a partnership of faith-based organizations committed to enacting fair and humane immigration reform. The Presbyterian Church (U.S.A.) is part of the coalition and the Welcome with Dignity campaign, which also took part in the event, co-organized with Side With Love and the Unitarian Universalist Service Committee.

In addition to first-person testimonials by immigrants, the teach-in provided updates on policies that serve as obstacles to asylum seekers, and attendees were urged to reach out to members of Congress from July 18-29 — “Heal Not Harm” Weeks of Action — to demand the restoration of “life-affirming” asylum policies and the end of Title 42.

“As a person of faith, I come to this webinar feeling sorrow and anger about how much pain exclusionary government policies, such as Title 42, have caused asylum seekers, and yet, I also come with the conviction of my faith teaching to be an agent of healing and hope,” said Krehbiel, Associate for Refugees and Asylum for PDA. “Together, people forced to migrate and allies, we can make our voices heard to restore U.S. asylum.”

The Trump administration began implementing the U.S. Centers for Disease Control and Prevention’s Title 42 policy in 2020, allowing migrants to be expelled without being screened for asylum. The need to protect U.S. citizens from the spread of Covid was cited as a reason.

However, Melina Roche of the Welcome with Dignity campaign told teach-in attendees that “Title 42 uses the pandemic as a guise to expel people back to Mexico or their home country of origin” while “Remain in Mexico forces asylum seekers to wait in Mexico in dangerous conditions” while awaiting a hearing.

“Both of these are unprecedented policies that undermine … our moral and legal obligations to welcome refugees and asylum seekers and combined have essentially closed the border to all seeking safety,” she said.

Susan Krehbiel of Presbyterian Disaster Assistance, right, and Merwyn De Mello of the Franciscan Action Network were among those who spoke during the teach-in. (Screenshot)

The U.S. attempted to end the Remain in Mexico policy (also known as Migrant Protection Protocols) in 2021. But the move was challenged in court, resulting in an injunction, and enforcement resumed. Last month, the Supreme Court made a determination that the Biden administration has the right to end the policy. (See statement posted by U.S. Department of Homeland Security.)

But advocates for immigration reform are worried because of efforts by some members of Congress to “codify Title 42 and Remain in Mexico into law,” Roche said. (See details here.)

It’s important for the public to speak out, she said, because direct engagement from constituents makes a “huge difference,” especially with members of Congress who are “on the fence.” 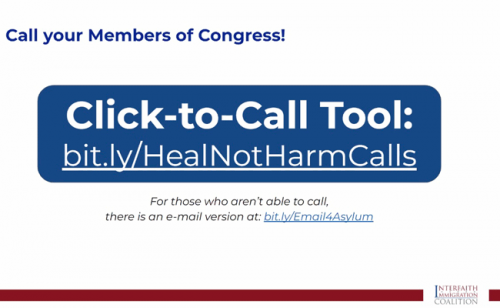 With that in mind, Tuesday, July 26, will be the call-in day for members of the Presbyterian Church (U.S.A.) to contact their representatives in Congress. Also, a webinar with the Disciples of Christ is scheduled for noon Eastern Time “to pray together, share stories about the harm of current asylum policies and to call our members of Congress to ask for asylum policies that ‘Heal not Harm,’” Krehbiel said. (Register here.)

“Whether or not Presbyterians have the direct experience of being asylum seekers at the U.S. border, they should be concerned about policies that conflict with U.S. law and ethics to protect those in need of protection,” Krehbiel said. “Arbitrarily closing the border and access to asylum undermines our immigration laws that include the right to seek asylum.  It is even more offensive ethically when you consider that the U.S. government has opened our borders and air travel to tourists, students, businesses and all other categories of foreigners. So what are the underlying assumptions about people who seek asylum, especially from the southern hemisphere, that help perpetuate such discriminatory policies and practices?” 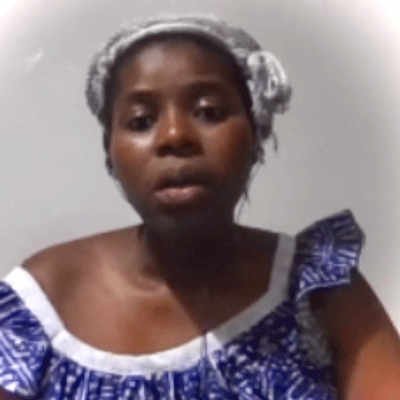 Sofi, a Cameroonian woman who told her story during the teach-in (Screenshot)

Immigrants who spoke during the teach-in included a Cameroonian woman named Sofi, who migrated to South America from West Africa and now lives in Maryland. She talked about facing racial discrimination prior to arriving in the U.S. that made it difficult for her to maintain employment and recounted other ordeals, such as an attempt to turn her into a prostitute. She also spoke of being lost in a jungle and of encountering death and despair. “I cannot explain; many things happened. But now, I’m here. I think I’m safe, with my children,” she said.

Hannah Hafter of the Unitarian Universalist Service Committee urged viewers to take action (click here) to prevent further suffering. “I just want everyone to know that the efforts really, really matter,” she said, noting that strides made in the past with the CDC would not have happened “if we had not put in the work to show them that the people of this country care about asylum seekers and do not want this done in our name and do not believe this is protecting our public health.”

Presbyterian Disaster Assistance is one of the Compassion, Peace and Justice ministries of the Presbyterian Mission Agency. Its work is made possible by gifts to One Great Hour of Sharing.