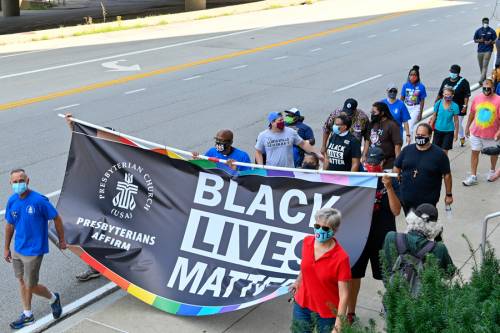 Last year, the Presbyterian Week of Action culminated on Aug. 29 with a justice rally and march in Louisville, Kentucky. (Photo by Rich Copley)

LOUISVILLE — Excitement is building for this year’s Presbyterian Week of Action, which takes place Aug. 23-29. It will lift up not only Black Lives Matter but other marginalized groups, such as Asian Americans and Pacific Islanders, who have been the target of hatred and discrimination.

“Shades of Oppression, Resistance and Liberation” is the theme of this year’s event, which is being coordinated by the Rev. Shanea D. Leonard with the Presbyterian Mission Agency’s Bearing Witness team and other interested parties.

“The areas we will touch are the plight of poverty; the AAPI issues that have arisen, especially this year; gun violence and mass shootings; LGBTQIA resistance and resilience; murdered and missing Indigenous women; and then also international struggles,” said Leonard, Associate for Gender and Racial Justice in the Presbyterian Church (U.S.A.) Office of Gender, Racial & Intercultural Justice. “And then finally, we will, as always, cover the issues concerning Black Lives Matter.”

The Week of Action, which made its debut last year amid a rash of racialized violence, including the deaths of George Floyd and Breonna Taylor, is meant to be a visible arm of justice throughout the denomination as the PC(USA) stands on the foundations of the Matthew 25 invitation and the Hands & Feet initiative.

That Scripture says, “O mortal, what does God require of you, but to do justice, to love mercy, and to walk humbly before your God,” Leonard noted, “and so we are called to literally do this work. Sometimes, it’s fearful. Sometimes we walk and lay our feet down without knowing what the next step is going to be, but regardless, we know that we are moving, and that the Spirit has required (this) of us.”

Like last year, the Week of Action is expected to include Bible studies, webinars, and community activities. But new things will be added, such as daily Scriptures and possibly a poetry slam. This year’s events will be a hybrid of both in-person and virtual opportunities to connect. More details will be released as events are finalized, but in the meantime, Leonard is encouraging everyone, including mid councils, churches and community activists, to get engaged. 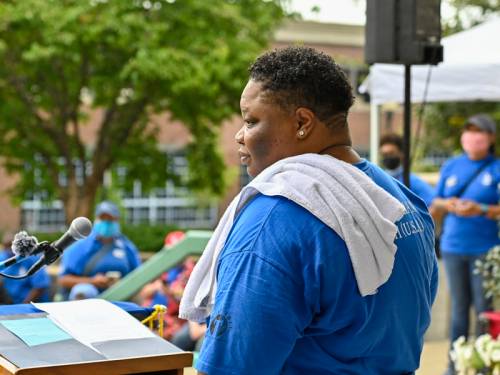 “If it’s tuning in to one of the virtual broadcasts, or if it’s you getting out and doing something in community that is inspired by the Week of Action, or if it’s you tapping in and giving me an email, or a call and saying, ‘Hey, we want to join up and do what we can,’ I encourage you to do what Christ has called us to do, to do the work of ministry, to be more than insular-focused, and sometimes, we get to navel-gazing,” Leonard said. “But God has called us to look beyond our walls, to look beyond our pews into the world that is hurting, that is marginalized, and that needs the light and love of Christ now more than ever — and so how will you step up to do that?”

The event dovetails with the Presbyterian observance of #Give828, a day of giving that will support leadership development for leaders of color by helping to fund the Katie Geneva Cannon Scholarship and the Conference for Seminarians of Color. #Give828, which is named after a date that has great significance in Black history, is part of the Week of Action as well as a national campaign and was kicked off this week in honor of Juneteenth.

Making #Give828 gifts is “a way that you can support the work of liberating oppressed communities without actually getting directly involved in work on the ground,” Leonard said. “Some people are not physically able to do maybe a march or go to something that requires you to go outside of your home, but what we can do is help and give in those ways.”

The Office of Gender, Racial & Intercultural Justice is one of the Compassion, Peace & Justice ministries of the Presbyterian Mission Agency.

The 2021 Week of Action web page is being built and will be updated regularly with new information, so check back often. For more information, email shanea.leonard@pcusa.org.

Here are the week’s daily themes:

Saturday: Black Lives Matter and #Give828