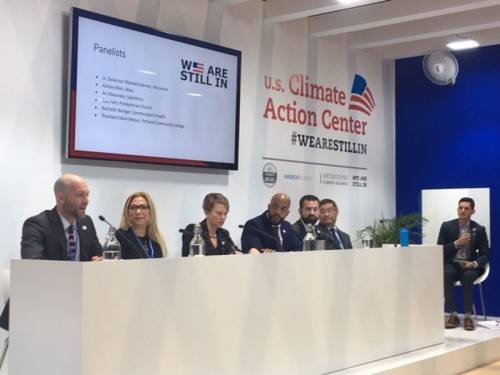 Rob Fohr, at left, the lead staff person to the Committee on Mission Responsibility Through Investment (MRTI), participates in a panel discussion last month at an international climate change conference held in Madrid, Spain. (Photo by Sue Rheem)

LOUISVILLE — Representatives from the Presbyterian Church (U.S.A.) and its partners have returned from an international climate conference that left some observers disappointed about a lack of aggressive action to protect the Earth.

The United Nations Climate Change Conference began Dec. 2 in Madrid, Spain and attracted delegates from nearly 200 nations, according to news reports, as well as protestors and activists, such as Greta Thunberg, Time magazine’s Person of the Year.

The Washington Post reported that negotiators at the event failed to achieve their main goals, including persuading the world’s largest carbon-emitting countries to pledge to fight climate change more aggressively, starting in 2020.

The lack of concrete action is disappointing because “all the research suggests that we’re in a very dire time and are already experiencing the effects of climate change” as natural disasters, such as fires and floods, become all too frequent, said Rob Fohr, lead staff person to the Committee on Mission Responsibility through Investment (MRTI) of the Presbyterian Church (U.S.A.).

“These negative effects are disproportionately experienced by countries and communities mainly in the Global South who have less resources to mitigate the worsening effects of the changing climate,” said Fohr, who participated in the conference, which is sometimes referred to as COP25.

Fohr said that “it is imperative that governments act with urgency to create policy measures needed to move the needle” in terms of reducing emissions.

Yet, the Trump administration has begun the one-year process to withdraw the U.S. from the Paris climate accord, citing the need to protect American workers, businesses and taxpayers from having to shoulder the economic burden.

COP25 stands for the 25th session of the Conference of the Parties to the United Nations Framework Convention on Climate Change.

“I was pleased to attend several official side events at COP25 where voices from people in frontline communities were front and center,” Fohr said. 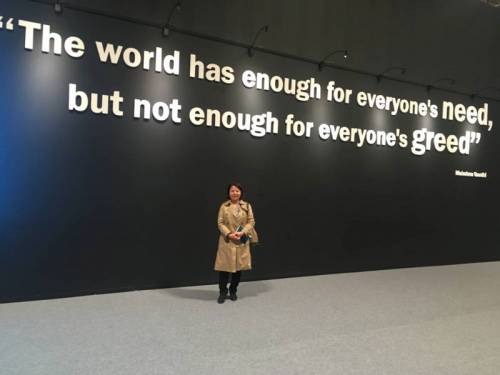 Sue Rheem of the Presbyterian Ministry at the United Nations noted that taking action to reduce the impact of global warming is one of the U.N.’s Sustainable Development Goals, which is one of the reasons she was interested in attending the conference. According to the U.N., the goals are the blueprint to achieve a better and more sustainable future for all.

The PC(USA) also has a strong interest in the topic of climate change and a history of advocacy on that issue.

There were several other PC(USA)-related observers at COP25, including Fohr’s predecessor, the Rev. William Somplatsky-Jarman; Christian Brooks from the Office of Public Witness; the Rev. Dr. Neddy Astudillo of the Presbyterian Hunger Program Advisory Committee; Bee Moorhead, executive director of of Texas Impact; and Erica Nelson, a member of the Advisory Committee on Social Witness Policy.

PC(USA)’s delegation participated in the advocacy work of the World Council of Churches, the ACT Alliance and other faith-based groups.

“There were delegates there from everywhere,” said Rheem, PMUN’s mission specialist for international advocacy. “This year, in particular, there was a very strong presence from the indigenous community,” which helped to put a human face on the impact of climate change and might serve as motivation for “people back home to do more.”

Taking part in the conference sometimes required walking several miles a day from venue to venue to participate in various activities, she said.

Fohr was part of a panel discussion around “We Are Still In,” an initiative that, according to an online description, involves a diverse range of signatories committed to “delivering on the promise of the Paris Agreement and America’s contribution to it.” 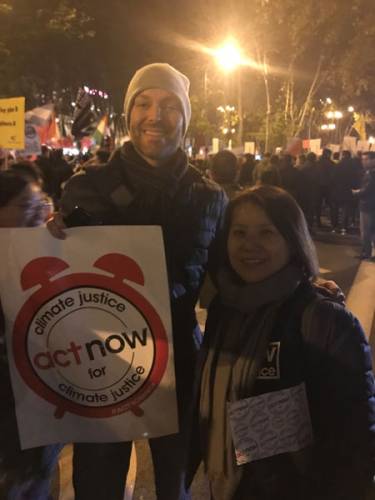 The Presbyterian contingent also took part in a climate march that reportedly drew hundreds of thousands of people. Among others, the crowd included families and children as well as members of the ecumenical community, Rheem said.

“It was really exhilarating to be with everyone who felt really strongly and felt the urgency for action,” she said. “It was really good to be there with others, and not feeling that you’re alone in this — that people really do care and want to do something.”

“We were marching with the faith-based community and it was all very good,” he said, despite what he described as a mild incursion by some anarchists who were trying to disrupt the peaceful nature of the march.

Overall, the conference “was both quite overwhelming in its enormity and complexity, and a really positive experience,” Fohr said. “I’m glad I went.”

The Presbyterian Ministry at the United Nations is supported by your gifts to the Peace & Global Witness Offering.