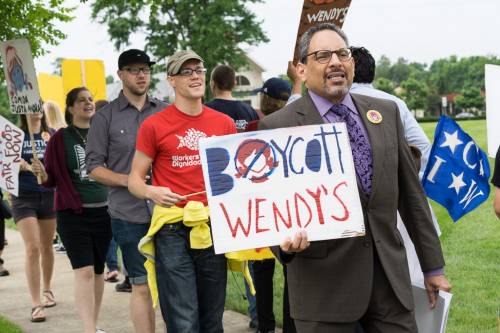 DUBLIN, Ohio – Tony De La Rosa, interim executive director of the Presbyterian Mission Agency, joined more than 60 demonstrators gathered at the headquarters of Wendy’s Corporation in Dublin, Ohio to protest and urge the company to adopt Fair Food Program practices for its purchasing of tomatoes and other produce. The protest, organized by the Coalition of Immokalee Workers (CIW), was held May 26, 2016 to coincide with a shareholder’s meeting.

“Wendy’s shareholders are meeting to discuss their massive revenue and approve strategies to increase it,” said Lupe Gonzalo from CIW in a prepared statement. “But what will not be a topic of conversation is the fact that, as the final major fast food holdout to the Fair Food Program they are literally extracting profit from the grinding poverty and abuse of farmworkers all the while manicuring their image with a Code of Conduct for Suppliers that contains absolutely no mechanism for worker participation or enforcement.” 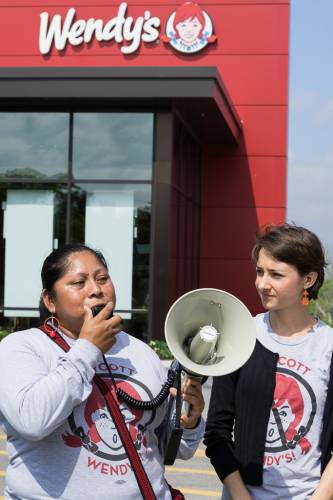 The Presbyterian Church (U.S.A.) has supported the CIW from the beginning as it worked to secure Fair Food agreements from Yum Brands, McDonald’s, Burger King and Subway. At its recent meeting in Louisville, the Presbyterian Mission Agency Board officially endorsed the call for a national boycott. The Rev. Gradye Parsons, stated clerk of the General Assembly of the Presbyterian Church (U.S.A.), has also endorsed the boycott, saying, “The PC(USA) joins the Coalition of Immokalee Workers in calling on Wendy’s to sign a Fair Food agreement.”

“Wendy’s has, for many years, avoided the criteria of the Fair Food Program, even as other companies have joined on,” said De La Rosa. “We believe, as people of faith, that it is time for Wendy’s to adopt the criteria of this program. Thievery in the field, sexual harassment and other abuses have no place in the supply chain of our food. It is right and moral that workers receive a fair wage and just working conditions are established.”

Ecumenical and interfaith religious leaders joined student groups and other labor organizations at the protest urging Wendy’s to adopt fair labor practices and increase payments to produce pickers to which other major fast food corporations have agreed. Ruth Farrell and Andrew Kang-Bartlett of the Presbyterian Hunger Program also joined in the protest.

“[Presbyterians] have been with the Coalition of Immokalee Workers for years,” said Farrell. “We’ve marched with them, prayed with them and stood with them as 14 major food retail companies have signed the Fair Food Program to make sure working condition are fair in the tomato fields and Wendy’s doesn’t want to do it. So after many years, we’re joining with their boycott.”

Four representatives from the protest group—Silvia Perez of CIW, Natali Rodriguez of the Alliance for Fair Food, Amanda Ferguson of the Ohio State University Student/Farmworker Alliance, and Rabbi Rachel Kahn-Troster of T’ruah: The Rabbinic Call for Human Rights—were present in the shareholder’s meeting and reported back to the group that Wendy’s claims its internal “code of ethics” binds its employees to a standard for purchasing. But coalition members say this code does not meet the criteria of the Fair Food Program and avoids holding foreign vendors, primarily Mexican produce companies, to any standard at all.

The CIW has called for a boycott against Wendy’s because:

In a press release, the CIW stated, “Wendy’s stands alone as the last of the five major U.S. fast food corporations refusing to join the Fair Food Program. By refusing to participate, Wendy’s is deriving a very real cost advantage over its competitors, while continuing to provide a market for less reputable growers.”