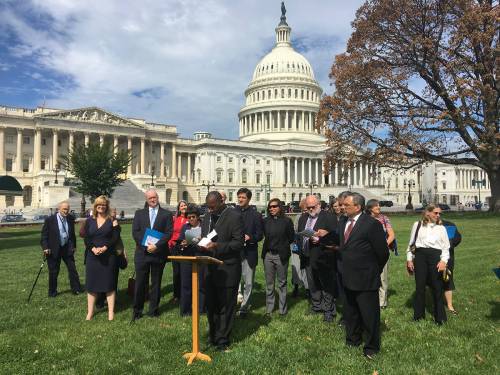 So responded clergy members of the Presbyterian Church (U.S.A.) on Tuesday in front of the U.S. Capitol.

The denomination’s Office of Public Witness (OPW) hosted a day of advocacy on September 12, interceding on behalf of a “Faithful Budget” as highly contentious budget negotiations continue on the Hill. OPW live-streamed a press release (archived video here), in which Presbyterian clergy vocally and repeatedly articulated that the federal budget has a moral valence.

OPW Director the Rev. Jimmie Hawkins began by emphasizing the president’s proposed 2018 budget increased military spending by $54 billion while cutting social programs by the same, stating, “the budget is a moral document and reflects our values – and therefore our values are with the poor.”

Although advocating for a major role of government in society, speakers also made clear that they felt called to be “prophetic disturbers” of government when its policies are unjust. The Rev. Dr. Rhashell Hunter argued U.S. federal policy has historically had an unequal impact on Americans divided along financial and racial lines – particularly the GI bill, which she said disproportionately benefitted white Americans and financed 40 percent of the mortgages in 1946 and 1947.

The Rev. Scott Ramsay added that “our budgets will be held accountable for how they care for the most vulnerable among us.”

Speaking along similar lines, the Rev. Dr. Kathryn Threadgill quoted Jesus, saying, “If you do it to the least of these, your brothers and sisters, you do it to me. A national budget that adheres to the ethics of God’s kingdom – and creates a more perfect union with liberty and justice for all – will seek to join with vital congregations in responding to the needs of our neighbors.”

“A federal budget reveals our relationship to God…[People of faith] evaluate the Federal Budget on the basis of its human consequences…on what it does to and with and for people, [especially those] who have been pushed to the margins and made vulnerable by institutional racism, and white supremacy, and climate change, and corruption,” said the Rev. Mark Koenig, coordinator for racial and intercultural justice with the Presbyterian Mission Agency.

Doug Grace, from the Presbyterian Network to End Homelessness, described government, corporate and church cooperation in building social safety nets and disaster relief, as a “three-pronged stool” that requires shared participation. He disputed the idea that churches can and should “take over” these roles of government, saying, “We’re doing [our part]. And we need that partnership.”

Following the news conference, many of the faith leaders met with congressional and senate staff.

Henry Stone is editor of Unbound: An Interactive Journal of Christian Social Justice.