Share God’s love with our neighbors-in-need around the world through One Great Hour of Sharing.
Make A Donation Click Here >
Home › Presbyterian Hunger Program joins other Presbyterians at climate march in Washington 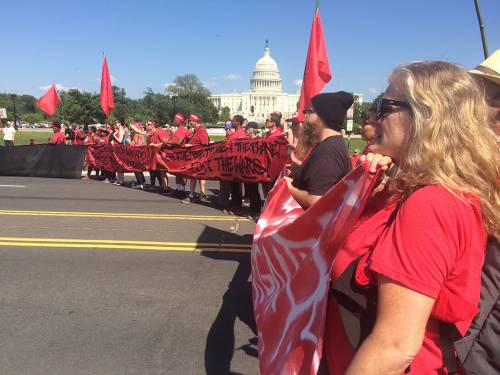 Earth Red Line street theater action near the Capitol the day before the People’s Climate March in Washington. (Photo by Andrew Kang Bartlett)

LOUISVILLE – Presbyterians from across the country joined more than 150,000 people in Washington, D.C., last weekend for the People’s Climate March. Crowds lined the streets from the Capitol to the White House, ending the march at the Washington Monument. The large demonstration and smaller ones around the country were planned to coincide with the Trump administration’s 100th day in office.

The Presbyterian Hunger Program (PHP) and organizations like GreenFaith, Presbyterians for Earth Care, Fossil Free (PCUSA), Presbyterian Peace Fellowship and Creation Justice Ministries also took part in the march. Group leaders say they participated because they believe issues of hunger, poverty, human rights, war, environmental destruction, racial injustice and other forms of violence are interconnected and that people of faith are called by God to respond.

“The faith contingent at the climate march was dubbed the ‘Keepers of Faith.’ That was my experience of our group! The day we marched, it was 91 degrees — among the hottest temperatures ever recorded on April 29 in Washington. Yet together, Protestant, Orthodox, Peace Church, Buddhist, Muslim, Jewish and Pagan religious groups were out there in the streets together with signs offering messages of hope and moral commitment,” said Shantha Ready Alonzo, executive director at Creation Justice Ministries (CJM).

CJM was formerly the National Council of Churches Eco-Justice Working Group and PHP Coordinator Rebecca Barnes is currently the board chair. CJM works to protect God’s creation through education, advocacy, leadership development and the production of annual “Earth Day Sunday” materials, including a 2017 focus on environmental justice with indigenous people.

“PHP has long connected hunger, poverty and environmental justice as realities that trap people and the creation,” Barnes said. “We work with partners nationally and around the world so that Presbyterians can help to alleviate hunger and eliminate its causes, including climate change.” 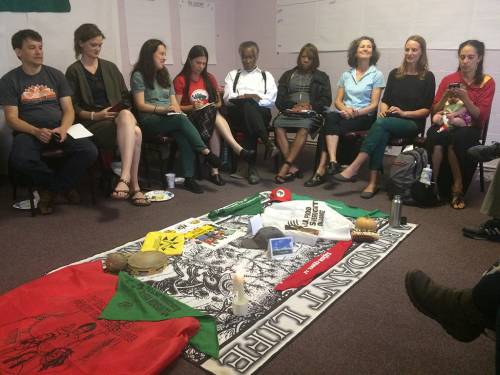 Celebrities from Hollywood and the political stage also joined the crowd including former Vice President Al Gore and business magnate Richard Branson. Organizers say the crowd included thousands who are “paying the price” for climate change including laborers, immigrants and indigenous people.

“People who produce food — like farmers and fishers — are often hardest-hit by climate change, which directly affects their family’s food supply and sources of income,” said Andrew Kang Bartlett, national associate for PHP. “With 78 percent of the world’s poor relying on farming to support their families, it’s important to develop sustainable ways of farming that support both the environment and those who rely on crops for economic stability.”

Kang Bartlett participated in the march as well as a national coordination meeting of the U.S. Food Sovereignty Alliance at New York Avenue Presbyterian Church, demonstrating the connections between climate, hunger and food production.

Kang Bartlett says the corporate-controlled industrial food system is responsible for 44 to 57 percent of all global greenhouse gas emissions adding that emissions from agriculture, forestry and fisheries have nearly doubled in the past 50 years.

“Industrial agriculture requires deforestation to make room for endless fields of soybeans, corn, grain, oil palm and sugar cane,” he said. “It requires the dispossession of indigenous people and smallholder farmers from their territories through land grabs to make room for resource-intensive mega plantations and unsustainable resource extraction.”

Kang Bartlett says the industrial food system relies heavily on the extraction and use of fossil fuels to produce chemical insecticides and herbicides that damage soils and ecosystems. He adds that food sovereignty calls for the self-determination of indigenous communities, valuing women’s leadership, and the defense of territories, land, water and seeds.

“A small fraction of land and water are still in the possession of indigenous communities, farmers and fishers, nevertheless they continue to produce most of the world’s food, steward the land and defend the rights of Mother Earth,” Kang Bartlett said. “We need a food system that works for and nourishes everyone, not towards the capital gains of a small percentage of people.”

PHP is one of the founding members of the U.S. Food Sovereignty Alliance, a partnership of food justice, anti-hunger, labor, environmental, faith-based and food producer groups, and the Alliance continues to strengthen its collaboration with climate justice groups.

“Corporate-controlled industrial agriculture and fishing are significant contributors to climate change, while smallholder farmers build soil health and the resiliency of ecosystems which contribute to nourishing people and cooling the planet,” Kang Bartlett said. “Humans have a right to the resources required to meet their basic needs of shelter, sustenance and an adequate livelihood. The means of meeting these needs are often embedded in cultural practices that are vital to people’s sense of identity. Food feeds more than the body.”

Environmentally friendly, no-chemical farming based in indigenous knowledge is known as agroecology, and the food sovereignty contingent included it in the march chanting, “Agroecology cools the planet!” and “It takes roots, roots, roots to weather the storm, storm, storm!”

The Presbyterian Hunger Program is able to serve because of gifts to the One Great Hour of Sharing.