Agency oversight, board composition and shared services at heart of issues headed to General Assembly 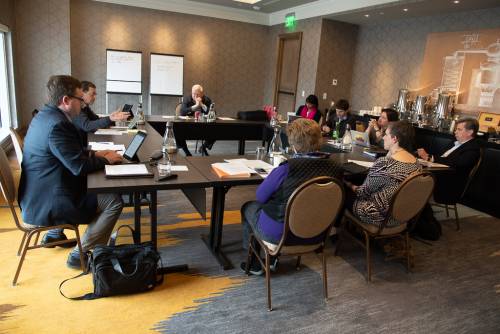 LOUISVILLE — Following a nearly two-year process that began at the 222nd General Assembly of the Presbyterian Church (U.S.A.) in Portland, Oregon, three groups are gathering April 8–9 to iron out disagreements over a joint recommendation from the Way Forward Commission (WFC) and All Agency Review Committee (AARC) on the corporate organization of the denomination.

At question is the “A Corp.,” the corporate entity of the denomination that currently functions as a fiduciary and legal body for the Presbyterian Mission Agency (PMA) and Office of the General Assembly (OGA) agencies of the PC(USA).

The joint recommendation of the WFC and AARC proposes a separation of the A Corp., removing it from the exclusive control of the Presbyterian Mission Agency Board (PMAB). The proposal provides for input and decision making from other agencies in regard to corporate functions and oversight of shared services utilized by several agencies.

The Governance Task Force (GTF) of the PMAB, formed in February 2016, has proposed its own recommendation and expressed concerns over several of the joint recommendation’s finer points. These concerns include the process of nominating board members for the A Corp., financial control of mission funds, and the perception that a separate A Corp. will introduce inefficiencies into the work of the Mission Agency.

Held in Louisville and moderated by Heath Rada, Moderator of the 221st General Assembly, representatives of the three groups were joined in their deliberations by Kerri Allen from the Advocacy Committee for Women’s Concerns (ACWC), Thomas Priest from the Advocacy Committee for Racial Ethnic Concerns (ACREC), Carol Winkler from Presbyterian Women (PW), and Stephanie Anthony from the Committee on the General Assembly (COGA) and an advisory delegate to the PMAB.

Among the approximately 20 observers of the deliberations were the Rev. Dr. J. Herbert Nelson, II, Stated Clerk of the PC(USA), along with Cynthia Jarvis and Veronica Goines, moderator and vice-moderator of the Way Forward Committee at General Assembly 223 in St. Louis.

Rada summarized the mandate of the Way Forward Commission, saying it was “to offer a new solution, immediately” to perceived problems in the denominational structure that don’t reflect the needs of the 21st century church.

“The Way Forward Commission and All Agency Review Committee have proposed a primary recommendation that will go to the General Assembly,” he said. “From my understanding, they have the priority and privilege to bring those recommendations, whether they are right or wrong.”

Appeals and disagreements are possible, he said, noting other Assemblies where multiple proposals had been delivered for consideration. “It isn’t a level playing field, but it doesn’t mean we don’t have the right to suggest or implement change,” he said of the Way Forward Commission’s mandate.

Melinda Sanders, chair of the PMAB Governance Task Force, read an opening statement in which she commended the work of the WFC and AARC, noting the many commonalities in the groups’ proposals.

“We’re very aware we serve Jesus Christ and we have a responsibility to serve the Presbyterian Church (U.S.A.) in our various roles,” she said, calling the group “part and parcel of the same church,” adding, “it’s in the church’s interest that we find common ground, and we’re capable of finding common ground.”

Several agendas had been proposed by the various groups for this face-to-face meeting, which prompted Rada to seek consensus for an agenda.

Jim Wilson, speaking for the AARC, led the way in expressing apprehension over what could be accomplished by reviewing already submitted proposals. 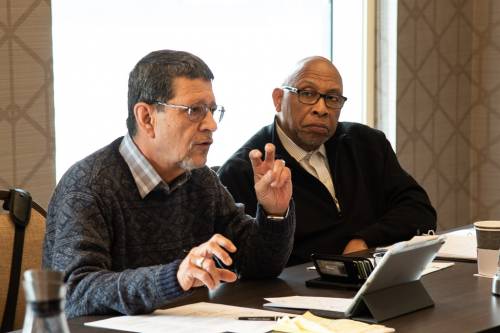 Conrad Rocha, speaking on the PMAB recommendation, countered, “It’s important we understand the context of the proposals. We’ve suggested it as an alterative, not as the primary course of action. In light of the recommendations made by the PMA review, on which Eliana Maxim [member of the Way Forward Commission] served, it’s important to understand our reaction to the proposal of WFC and AARC.”

“I share Jim’s concern in that we have already submitted our proposal and we are not able to amend that yet,” said Maxim. “We’re here to provide clarity around that recommendation. Regardless if we’re on the same ground, I don’t see how we can provide any information to that recommendation at this point.”

“We put a process in place to change things, and that may be important to consider in what you’re suggesting and what we’ve put in place,” said Rocha. When asked by Rada if there were points that could be clarified, he responded, “If people could understand what we’ve done it may be informative. Even though the recommendations have been sent to the [Stated] Clerk, our understanding is that they’re not set in stone.”

“There are fundamental disagreements about the proposals,” added Chad Herring, member of the PMAB. “My hope is that you all would hear from us on how our recommendation came about.”

Before Rocha and Herring could explain the history of the Governance Task Force proposal, Allen asserted the problem with the proposals sent to the Assembly were not in understanding them, rather how they were formed, specifically, she claimed, without input from advocacy and advisory groups.

“There is a pretty solid understanding for some of us about the proposals,” said Allen. “It’s not that people don’t understand, it’s that we may disagree. There are legitimate reasons these proposals came to be, legitimate concerns voiced throughout the church.

“As it stands ACWC opposes both proposals.”

Rocha began his explanation of how the PMAB recommendation was formed by saying in February 2016, “The PMAB was visibly shaken by the review report. As a result, we created the Governance Task Force for the purpose of [addressing] how should the PMAB structure itself so it could better govern itself.”

Recommendations that came from the GTF included reducing the board size from 60 to 20, giving board members responsibility in both legal/corporate and mission functions, and disbanding the executive committee so board decision making would be made by the entire body instead of a small group.

“It’s been a good model for how we carry out, what I call, responsible change,” Rocha said.

“It’s not easy to do mission as a church in the 21st century,” said Herring. “Can the removal of corporate function from PMAB free the board to work on mission, or will it create chaos?”

While he acknowledged the wisdom in “expanding the table” of those who direct the A Corp., Herring also said that by removing a corporate function from the PMAB “we think there should be some focused thought on what a mission program needs to function correctly.”

The separation of A Corp. will incur additional cost and time to ensure proper funds distribution, he noted, saying other concerns included “questions of membership and ownership of the A Corp., GA oversight of who is nominated and appointed to the A Corp. leadership, fiduciary conflicts of those who belong to other boards also controlling funds within A Corp.”

“From our perspective, this [A Corp.] board needs a narrow but important skill set to evaluate the best means of delivering shared services — accounting and legal services,” said Wilson. 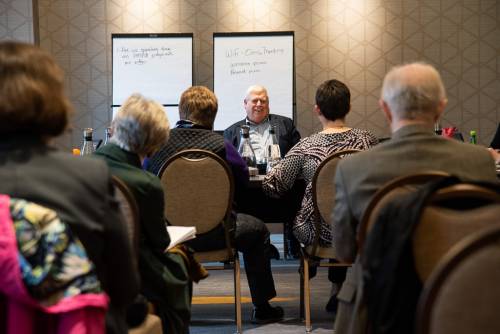 Heath Rada (center) at the conclusion of the April 8 meeting to discuss PC(USA) structure. (Photo by Gregg Brekke)

In addition to raising concerns about the readability and timeliness of corporate financial reports, the underutilization of the church office property in Louisville, diversity in board representatives and the professional competencies of board members, the group heard from others invited to the table.

Priest, speaking for ACREC, said Racial Ethnic groups in the church were still treated as mission, noting the denomination’s posture toward them is “we’re doing something for you because you can’t do something for yourself.”

“The title ‘racial ethnic concerns’ puts in a negative response,” he said. “We have a lot of concerns because we weren’t at the table. Diverse caucuses bring in the quality of life based on these decisions. Diversity is not fully included in the governance and policy making — we’re not expected to be there. Now that I’m at the table I can be more proactive.”

Priest concluded, “The message from ACREC is that representation needs to be inclusive.”

Carol Winkler said, “Presbyterian Women has been the best-kept secret of the church [because] it doesn’t fit into the corporate/agency structure.”

She asked how Presbyterian Women’s future could be assured in the A Corp. As the second-largest user of currently provided shared services, she wondered how the autonomy of PW would be assured.

“Shared services are the second largest item in the Presbyterian Women’s budget,” she said. “Cost impacts the ability of PW to do mission.”

Presbyterian Women, as a shared services participant, has not been allocated a seat at the executive table of the proposed A Corp. formations, she said, “while non-participants the Presbyterian Foundation and the Board of Pensions have seats.”

“The overarching concern is that some of the stuff we’re talking about are cultural issues,” said Allen, speaking on behalf of ACWC. “How we do those cultural shifts? We’re not convinced structural change will lead to culture shifts. We ought not divorce money from mission. God is present in all spheres of life, so we should be too.”

Allen asserted that ACWC had not been contacted by the WFC or AARC as they surveyed the concerns of the church. “It’s not a wholly accurate statement to say you talked to all corners of the church,” she said to the members of the two groups.

Wilson countered that the AARC had attempted to communicate with the ACWC representative provided by the General Assembly without success.

Anthony noted COGA had made a statement in support of the WFC and AARC recommendations, saying, “If the Assembly brought these groups together then we trust there’s some wisdom and the Spirit at work.”

Yet, she said COGA was not consulted by the PMAB on its recommended deliverance to form separate corporations for the PMAB and COGA and the PMAB’s decision to distance itself from providing shared services.

“I share concerns about the cross-agency conversations, that these silos need to have some conversations,” she said. “Folks who are impacted by the work of the A Corp. need to be at the table. Our main concerns are about the board makeup, much of which has been addressed. First, I’m not convinced Board of Pensions and Foundation have a role at that table. Second, broadening the A Corp. membership doesn’t seem the same as a commitment to equality and equity.”

Rada offered a summary of the day saying the conversation was honest, there was a desire by all parties to “do church differently,” an acknowledgment that there had been communication lapses but “no intentional exclusion,” and each body present had valid input.

He suggested the various parties spend the evening formulating questions that could be addressed beginning at 9 a.m. Monday, saying, “Anything we come back with should be realistic, in light of recommendations already made.”

In commending the group’s work, Rada concluded by saying, “We still have a whole life of the church ahead of us; we don’t have to be confined to the deadlines of the General Assembly.”