TIJUANA, Mexico — The Rev. Brian Parcel was preaching about Nicodemus coming to Jesus Christ to ask him what he needed to do to inherit the Kingdom of God.

“If you carry anything with you, Nicodemus, that divides one from another, it is not of God,” Parcel said, and then he turned his attention to the massive object behind him: the border wall between the United States and Mexico. 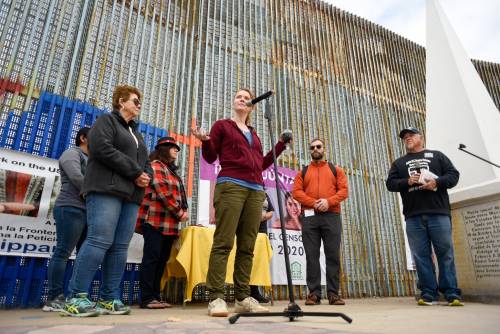 The Rev. Charissa Howe, one of the Travel-Study Seminar participants, helped lead communion at the Border Church. (Photo by Rich Copley)

“Whenever we gather at this place, it is impossible for us not to understand the ways in which, as humans, we have come to separate one from another,” Parcel said. “Anything, including this wall, that separates one from another, is not of God.”

Parcel, pastor of First United Methodist Church – Chula Vista, a California church seven miles from the border, was preaching at the weekly Border Church service in Friendship Park, right next to the beach where the border wall extends into the Pacific Ocean. This past Sunday, the first Sunday in Lent, participants in the Presbyterian Peacemaking Program’s southern border travel study seminar helped with the service and lunch.

It was the group’s second day in Tijuana, seeing firsthand the impacts of migration and immigration law north and south of the border, and the day started with a trip to the grocery store.

Tracey King-Ortega, Presbyterian World Mission’s regional liaison for Central America and coordinator of the travel study seminar with Presbytery of the Pacific, and Guillermo Navarrete, coordinator of the Mexican side of the church, led participants in the shopping trip where they gathered supplies for the lunches that were prepared for people attending the service, including migrants hoping for an opportunity to enter the United States.

Pushing shopping carts down the aisles, they gathered tomatoes, onions, potato chips and bags of fresh-baked bread that brought to mind another famous meal and service from Scripture. 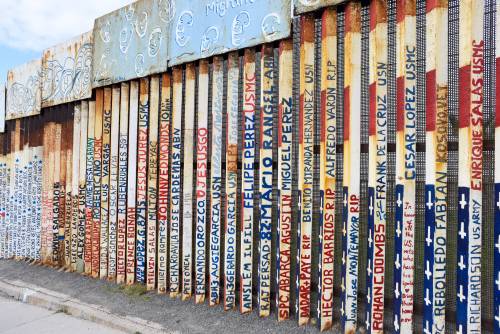 Memorials for deported U..S military veterans who died while in Mexico are part of the Border Wall. (Photo by Rich Copley)

A few miles away, in the park, travel study seminar participants joined with people from the church who quickly turned a small section of the park into a sanctuary and kitchen with long white folding tables, portable tents and a portable sound system.

The travel study seminar participants went to work putting sandwiches together led in part by members of Unified U.S. Deported Veterans, a group of U.S. military veterans who have been deported after serving. As the service came together, Hector G. Lopez, an Army veteran and the group’s director, explained to some participants his plight and the plight of other veterans — many of whom had been told that their service would earn them permanent status in the U.S., but found that that was not the case after brushes with the law, often for minor infractions.

Lopez said he moved to the U.S. with his family when he was 3 years old and was told he would earn citizenship through six years of service. But, like dozens of others, he was deported and is now living in Mexico and fighting to be repatriated, along with his fellow veterans.

Some of the ironies of his and others’ deportations include that he still receives veterans benefits and he can go back to the United States when he dies and will be buried with full military honors.

Among the many colorful murals on the Friendship Park section of the border wall are memorials to veterans who died in Mexico following deportation. Their names are on one side of the bars, and the other side is painted to form an upside-down United States flag, a symbol of distress.

Lopez said the saddest thing to all the veterans is that most still have family and friends on the U.S. side of the border.

Friendship Park is a place where separated families can often meet, through the thick bars and wire of the wall. But on Sunday, the United States side of the park was closed. 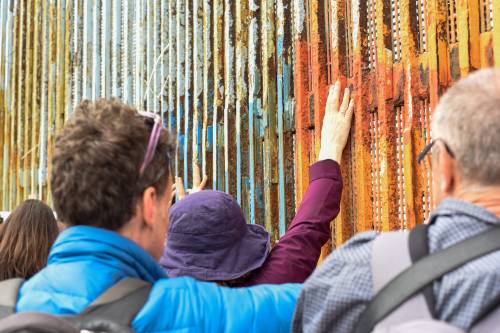 Participants in the Border Church laid hands on the Border Wall during confession. (Photo by Rich Copley)

Participants in the church said that the U.S. side of the park had been closed several weeks by the U.S. Customs and Border Protection. Often the service would be held with American participants immediately on the other side. This Sunday, a group of 20 was gathered on a hill overlooking the wall in San Diego.

“We want to assure you we are with you in spirit,” the Rev. John Fanestil, a pastor with the Border Church said to the Mexican congregation via cellphone from the U.S. side, where he said he was with 20 students from Loyola Marymount University. “We love you and give you a big hug and hope to be with you very soon.”

For the passing of the peace at the service, participants linked pinkie fingers, signifying the only physical connection they could have through the fence, when people from the United States were allowed to come up to it.

The service also included a musician playing contemporary worship songs such as “I Could Sing of Your Love Forever” and “I Surrender All,” and a laying on of hands for a young woman whose asylum hearing was scheduled for Monday.

Border Church participants laid hands on a young woman whose asylum hearing was scheduled for the next day. (Photo by Rich Copley)

Two of the travel study seminar participants were part of the service, leading communion.

“Communion is one of my favorite pastoral actions, and it was really special to be part of that particular part of the service,” said the Rev. Charissa Howe, pastor of two churches in the Pittsburgh area, who presented the wine.

The Rev. Linda Culbertson, general presbyter of Presbytery of the Pacific, presented the bread and said, “It was a very powerful space.”

Both were impressed with how easily people from a variety of backgrounds came together to present the ecumenical service, and noted that they were asked to participate at the last minute. They credited Navarrete for directing the events and setting a tone for the service.

“It’s not about us,” Culbertson said. “It’s about the experience of being part of the larger group.”

Your gifts to the Peace & Global Witness Special Offering support the work of the Presbyterian Peacemaking Program.