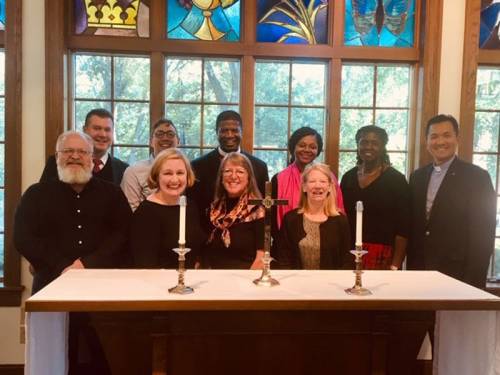 Members of the Presbyterian-Episcopal dialogue posed for a photo this week, In the back row from left to right are Richard Mammana, Brian Entz, Bishop Eugene Sutton, Terri Ofori, Dianna Wright and Neal Presa. In the front row are Michael Booker, Canon Elise Johnstone, Anne Bond and Margaret Rose. (Contributed photo)

GLENDALE, Ohio — Representatives from the Presbyterian Church (U.S.A.) and The Episcopal Church met this week at the Transfiguration Spirituality Center in Glendale, Ohio, to discuss mandates affirmed by both churches last year to talk about such issues as what would be needed to lead both denominations toward full reconciliation of ordered ministry.

Other topics to be addressed over the next five years include discerning the meaning of membership in a shifting American religious context, analyzing ecclesiological identities and differences using historic and socioeconomic lenses, and working with the respective national offices of both churches to develop guidelines and resources for mutual ministries and missions, particularly in areas of collaboration for new worshiping communities and ecumenical congregations.

This week, those involved in dialogue met with the pastoral leadership of the Indian Hill Church, a 72-year old federated Presbyterian and Episcopal congregation which co-exists in one campus. The church has shared leadership, finances, governance, and worship — and decidedly two distinct ecclesial traditions living as one community. Representatives listened to clergy leaders The Rev. Nancy Hopkins-Greene (Episcopal) and The Rev. Stephen Caine (Presbyterian), and local judicatory officials The Rev. Canon Lynn Carter-Edmands and General Presbyter Lisa Allgood, as they shared both the joys and challenges of what was hailed as an “ecumenical experiment.”

Representatives discussed the history of dialogues between the Episcopal Church and the Presbyterian Church, which have spanned more than a century. Official bilateral conversations began more than three decades ago.

Those in dialogue reviewed and affirmed 10 points of a 2008 Agreement, among which were mutual recognition of the two churches’ belonging to the one holy catholic apostolic church, mutual recognition of both bodies bearing the two marks of churches from the Reformation (preaching and sacraments), mutual recognition of one another’s ordained ministries and mutual acknowledgement of the need to connect the dialogue with judicatories/mid councils and parishes/congregations.

Dialogue participants expressed support of a current movement underway by leaders in The Episcopal Church for reparations for African Americans as a tangible expression of racial reconciliation in the United States, particularly in light of the recent observance of 400 years of the transatlantic slave trade. A news release issued following the dialogue said this might be an area of “clear and immediate ecumenical collaboration” between the two churches.

On the final day, dialogue representatives discussed and noted those communities and congregations across the country that are ecumenical collaborations and respective full communion partners, and the status of ongoing bilateral dialogues. Members reviewed an online asset map of shared Presbyterian and Episcopal ministries, which includes campus ministries, congregations, hospitals, retirement communities, Creation care work and food pantries.

They also reflected on the importance of safeguarding standards and mutual reporting processes in ecumenical ministries across all the denominations’ partner churches.

As dialogue participant closed the three-day session with prayer, representatives grieved the news of the anti-Jewish violence in Halle, Germany, at a synagogue during the holy observance of Yom Kippur.

The Bilateral Dialogue will meet again on February 17-19, 2020. It will be hosted by the Presbyterian delegation at a location to be determined.