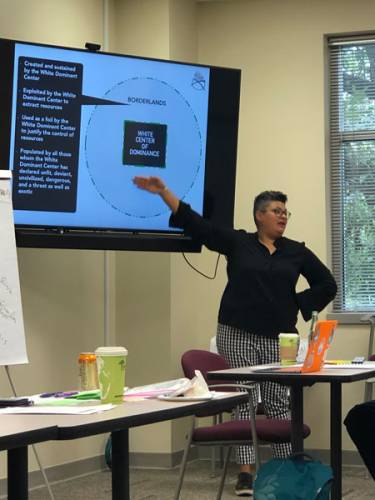 LOUISVILLE — Knowing that the membership and leadership of the Association of Presbyterian Church Educators (APCE) is nearly 100 percent white — and that its organization didn’t reflect the diversity of God’s beloved community — APCE formed a task force this year to look at white privilege, racist systems and oppressive practices inherent in its structures.

That task force met with APCE’s Coordinating Council, which includes representation from all the ministry teams in the organization and denominational leaders, during its fall meeting at Austin Presbyterian Theological Seminary. During the meeting representatives participated in a Crossroads Antiracism Organizing and Training workshop. Entitled “An Introduction to Systemic Racism,” the training was made possible through a partnership with the Office of Christian Formation and the recently-formed Christian Formation Collective, to which APCE belongs.

“We partnered with this training because we felt it reflected commitment to support the church in dismantling systemic racism,” said Christian Formation associate coordinator Stephanie Fritz.

According to APCE’s task force chair, Susan Young Thornton, the organization was brought face to face with the many ways the church has been — and is — complicit in North America’s history of exclusion and domination. It was also confronted with the demographic that APCE membership reflects the churches it’s been part of — congregations that are about 90 percent white and about 10 percent people of color.

“APCE’s problem is not diversity, but white control,” Thornton said. “We must be ready to honestly assess who holds power and if we are willing to share.”

Thornton said she believes APCE must be prepared to alter its decision-making process and yield control of the purse strings while asking the question of whether it’s willing to allocate resources differently.

“We’ve tried to be as diverse as possible within our organization,” said APCE president Carl Horton. “But that has led to a sort of token representation.”

The Crossroads training, which was led by Jessica Vazquez Torres and Jyaphia Christos Rodgers, encouraged APCE to see its work not strictly as an effort to diversify, but rather as an act of justice and equity.

Dana Larson, a director of Christian education in Anchorage, Alaska, said she’s always known that filling slots with people of color is a symbolic act so long as power remains with the white dominant culture.

She says that white, dominant attitudes and ways of being at APCE — which celebrates its 50th anniversary next year — have created a great organization for the white dominant culture.

“I’m excited the organization is willing to address systemic racism,” she said, “and to work to create an organization that is just and equitable for all involved in faith formation.”

Calling the APCE anti-racism training event “impactful,” the Rev. Dr. Kathryn Campbell, associate pastor at Starmount Presbyterian Church in Greensboro, North Carolina, said she was reflecting on the work with task force members following the sessions. All agreed their minds were full and even overflowing with the information they’d received.

She left with a strong sense of what she called “the Spirit’s presence in our work,” grateful to have much to think about in all of her worlds — as an individual, as a pastor, and as an ACPE member.

“Where do we go next?” she asked. “I’m confident as the task force dreams and discerns together with executive, ministry and denominational leaders that we are now supported by a great foundation and framework.”

As chair, Thornton says the task force has worked to define the scope of diversity to include not only race and ethnicity but also sexual orientation, gender identity, ableness, language, culture, education and socio-economic status among professional and volunteers, ordained and lay, urban, suburban and rural educators. The APCE diversity task force plans to meet next with PC(USA) caucus leaders.

Through a grant from Financial Aid for Service, new PC(USA) scholarships are being offered to attend the APCE annual event, which will be held in Little Rock, Arkansas January 29-February 1, 2020. These scholarships give preference to people of color and those with little or no continuing education funds.  Find out more and apply by clicking here.

Each year the APCE annual event invites educators, pastors, youth workers and volunteers to gather. This year the event is exploring “out of the box ministries.”