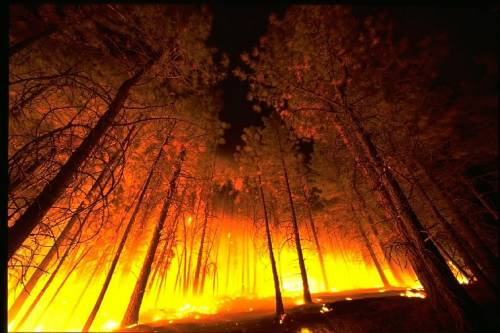 Wildfires have destroyed hundreds of homes and scorched thousands of acres in California this year. (Photo by FEMA / Jana Baldwin)

LOUISVILLE – This year’s weather systems, especially the El Nino patterns, have caused serious headaches for disaster assistance crews across the country, whether dealing with flooding or drought situations.

“Because of windy, dry conditions, California and other western states have had a busy year with wildfires,” said Rick Turner, associate for Disaster Response with Presbyterian Disaster Assistance. “PDA offers assistance to mid councils in response to wildfires however, many fires occur in less-populated areas and PDA’s assistance is not requested.”

More than 200 homes have been destroyed and nearly 50,000 acres of land have been scorched in recent weeks as wildfires have raged in Kern County. While most of the fires have been contained, officials are not easing up for fear the weather will reignite the flames that have left hundreds homeless.

The Rev. Jeanie Shaw led the NRT to meet with the Presbytery of San Joaquin and assess damage to the area.

“You drive up from the Sacramento Valley and see crop after crop in the largest food producing valley in the world,” she said. “Then you travel east into the mountains and into high desert with dry rocks, where you can see smoke and haze. Near Lake Isabelle, there are blackened, charred hills and a pink dusting from airplanes trying to protect a town on the ridge.”

Shaw and team got to see the damage firsthand.

“You drive up these canyons on one-lane roads with house after house with a blackened, charred line literally five feet from some of these structures,” she said. “In some cases, all you have left is a chimney or a twisted remnant of what was once a lawn chair or swing set.”

Shaw met with firefighters, presbytery leaders and those who had lost everything in the fires.

“It is an honor to be there as some of the first boots on the ground and being a compassionate presence to people who know we are there for them to talk with,” said Shaw. “We talked with disaster workers that were exhausted and prayed with them. We connected some of the disaster leadership with people from Westminster Presbyterian Church in Bakersfield who provided housing for one of the leaders whose house was damaged by fire.”

Shaw said presbytery leaders were very interested in long term recovery and will be working with PDA and local experts on emotional care issues.

“The center was in dire need of volunteers to help sort through the donations,” said Shaw. “People were arriving at the donation center that had lost everything and had to be at work and all they had were the clothes on their backs. They were going through bags and bags of clothing to find something they could wear.”

Shaw says the Red Cross is working to establish a Long Term Recovery Committee (LTRC) adding PDA will be involved with that.

PDA is currently supporting local responses in Redwoods Presbytery (the Valley fire in California) and wildfires that struck areas of Idaho in the Presbytery of Inland Northwest. PDA is also standing by to determine if a response is needed to the Cold Springs fire near Nederland, Colorado in the Presbytery of Plains and Peaks.

Turner says PDA’s first action when responding to wildfires is “ministry of presence” to let those impacted and responding know that PDA/PC(USA) is there to assist.

“During the initial deployment, PDA’s National Response Team assesses needs and begins offering assistance in planning the recovery,” said Turner. “Later, when the real work begins during the rebuilding stage, PDA offers Resilience workshops for those who have been assisting and caring for survivors. PDA is known in the disaster community for it’s long-term recovery efforts.”

Turner says PDA will continue to assist the impacted communities until the work is done or the resources are depleted.