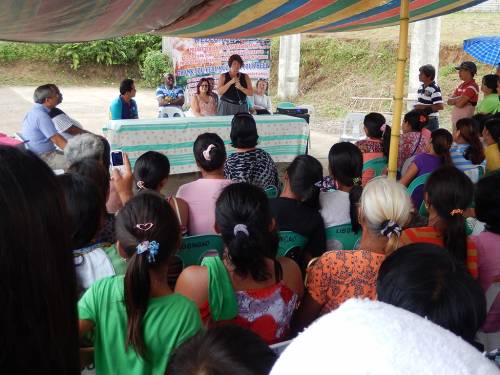 LOUISVILLE – It was November 8, 2013 when one of the strongest tropical cyclones ever recorded, slammed Southeast Asia, particularly the Philippines. The result: more than 6,000 dead, towns and communities were destroyed and millions of people were left homeless, with no food and little hope.

Working in conjunction with the ACT Alliance and the United Church of Christ in the Philippines, Presbyterian Disaster Assistance began working with the island nation to rebuild.

“We wanted to look at projects that were still in the works as well as those that were completed,” said the Rev. Dr. Laurie Kraus, PDA director. “We were also there to look at the remaining projects and ceremonially turn the reigns of the response over to our partners in the UCCP.”

The cyclone caused catastrophic destruction within the cluster of islands, specifically Samar and Leyte. The delegation traveled to many of the communities and were pleased to see the progress that has been made to restore life to the region.

“It took almost a year for the UCCP to pull things together,” said Kraus. “Working collaboratively with our partners, we were able to bring in two outside specialists who work disaster response development, moving from one massive disaster to another.” 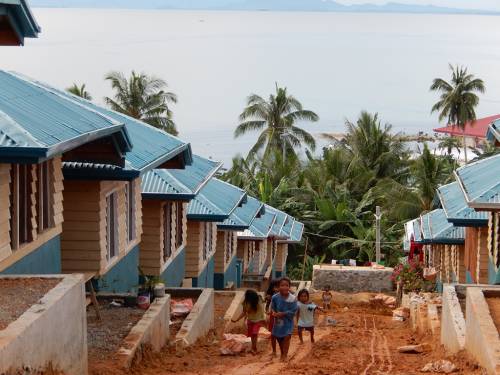 This village was relocated to higher ground in Samar after the fishing sites and nearby homes were swamped by storm surge. Approximately 73 new homes have been constructed. (Photo by Dayna Oliver)

“We were told we missed seeing the children’s faces the first time the faucet was turned on and they understood that they could actually drink the water that came out,” said Kraus. “It was such a gift. The principal of the school was full of such richness and deeply moved by the efforts to improve the lives of the children there.”

“For these kids not to have to leave the classroom to get water means they can spend more time in the classroom,” she said. “That mean their chances of getting a substantial education have improved dramatically because they don’t have to travel anymore for water or hygiene issues.”

While many of the people are rice growers, Kraus said farmers had to take their crops elsewhere to be milled and had to pay a hefty price for it. As part of the reconstruction effort, a rice mill was gifted to one community.

“Right after the typhoon, the people immediately started growing crops again, trying anything just to survive,” she said. “Now, the housing stock is better, people aren’t struggling to maintain and there is a true sense of joy.”

Throughout the visit, the delegation participated in ceremonial events to commemorate the new start.

“The people are very ceremonially inclined. They take seriously that its not just moving on with their lives, but really stopping and marking the significance of ending a period of disruption and being grateful for the resources that have come to them to help rebuild their lives,” said Kraus. “Neighbors had come together and realized they had been gifted with clean water and the ability to improve their livelihood.”

Kraus says its customary for PDA to return to a region toward the end of a large-scale disaster response project.

“It’s important that we go back to honor the work they’ve done,” said Kraus. “We’re given resources by the church, we find local partners and provide them with the tools to rebuild their own lives. They know what they need, but if there is expertise that we can provide, we support them.”

Click here for more information on PDA’s work in the Philippines.