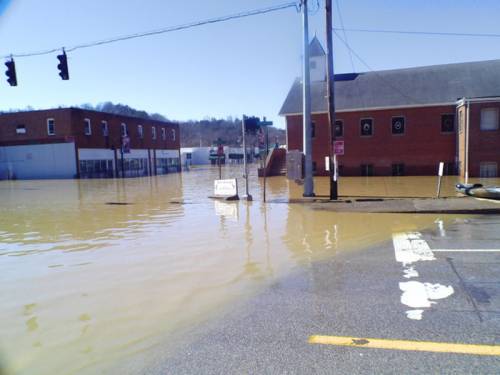 LEXINGTON, Kentucky ­— The winter storms themselves or torrential rains alone probably wouldn’t have had a huge impact. But combined, they left a trail of destruction it will probably take years to clean up in Eastern Kentucky.

Presbyterian Disaster Assistance is responding to the devastation in Kentucky’s Appalachian Mountain region by virtually deploying a National Response Team member to the Presbytery of Transylvania and providing three grants so far for damage to churches and nearly 2,000 homes in the region.

Click here to contribute to PDA’s response to flooding disasters.

“If you’ve been in the mountains, you know that you don’t build in the mountains. You build down in the valleys, and everything kind of runs along the river,” said the Rev. Philip Lotspeich, General Presbyter of the Presbytery of Transylvania. “So even though they built dams and have done things to try to mitigate that, when the worst happens, it’s pretty bad.”

Driving through the mountains, Lotspeich said, you can see homes, particularly mobile homes and trailers along the rivers, and they took the brunt of the damage and destruction as the waters rose. The Appalachian region of Kentucky includes some of the poorest counties in the United States.

Communities were also impacted, such as Beattyville, where McGuire Memorial Presbyterian Church took on about six feet of water, causing damage that included its HVAC system. In Buckhorn, Buckhorn Lake Area Presbyterian Church sustained flood damage, including its handicap ramp being washed away.

Churches have already been at work cleaning up debris including a piano that was destroyed in the lower level of McGuire Presbyterian.

“God has blessed us with the people who have come to help and their eagerness to just jump on board,” says the narrator of a March 6 video on the church’s Facebook page surveying the damage and debris.

While the national church is still under a travel ban due to the COVID-19 pandemic, which prevents PDA from sending an in-person national response team member, the Rev. Jim Kirk, PDA’s Associate for National Disaster Response, said he has been happy to see “commuter volunteers” from nearby cities such as Lexington come in to help with cleanup. Commuter volunteers can be valuable, Kirk said, because they provide help while not requiring resources such as food and hotel rooms needed by locals impacted by the disaster.

Transylvania Presbytery has also found a valuable resource in Camp Burnamwood, the Presbyterian camp and retreat center located in one of the impacted areas, Estill County. Property manager Kevin Turpin has been able to accommodate some people at the camp who lost homes in the flooding while they regroup. Lotspeich expects the camp will be integral to ongoing recovery efforts, particularly Burnamwood Appalachian Ministry, which has been operating out of the camp for years.

“The importance of looking long term is to build back better, so we’re not simply putting people right back into the same vulnerable status that they were in before the flood happened,” Kirk said. “And having that local engagement is more crucial now than ever.”

To Lotspeich, PDA has been crucial from the beginning in devising a presbytery response to the disaster.

“I really don’t even want to think about what we wouldn’t be able to do if PDA hadn’t assigned Jim [Garrett] and deployed Jim, even though it’s virtual,” Lotspeich said. “It’s been just as helpful. This is really the first disaster that I’ve had to deal with as a [general presbyter], and I cannot imagine having to deal without PDA’s help. I would be lost.”

Presbyterian Disaster Assistance is one of the Compassion, Peace & Justice ministries of the Presbyterian Mission.