Share God’s love with our neighbors-in-need around the world through One Great Hour of Sharing. Give now.
Make A Donation Click Here >
Home › Presbyterian Disaster Assistance responding to Dorian in the US and Bahamas

LOUISVILLE — As Hurricane Dorian bears down on the North Carolina coast, Presbyterian Disaster Assistance (PDA) stands ready to respond and already is responding to the devastation the storm left behind in the Bahamas.

The hurricane, which has been lurking in the Atlantic Ocean for nearly two weeks, has put both PDA’s national and international response teams to work. The Rev. Jim Kirk, Associate for National Disaster Response, says that is not unusual for Atlantic hurricanes, which can often hit countries such as Mexico, Cuba and Caribbean islands as well as the U.S. Mainland and Puerto Rico.

The Rev. Edwin González-Castillo, Associate for Disaster Response and Refugee Ministry–Latin America and the Caribbean, says he began making contacts in the Bahamas before the storm struck the island nation over the Labor Day holiday.

González-Castillo says PDA is working with the Rev. Stephanie Gottschalk, executive director of Bahamas Methodist Habitat, as well as ACT Alliance and Church World Service to respond to Dorian, which left parts of the country with devastation that reminded Kirk of tornado damage.

The storm made landfall on Great Abaco Island in the Bahamas at its peak intensity, with one-minute sustained winds of 185 mph and gusts to 220 mph. That tied it with the 1935 Labor Day storm, which struck Northwestern Florida, for the strongest recorded winds in a landfalling Atlantic hurricane.

Some of the images from the Bahamas are hard for González-Castillo to look at as he was in Puerto Rico, serving as the stated clerk of the Presbiterio de San Juan, when Hurricane Maria struck the island two years ago this month. While images from the Bahamas can stir up some painful memories, González-Castillo’s experience in the immediate aftermath of the storm gives him insight into how to respond to the current situation.

The No. 1 way anyone who wants to can help, he says, is financial donations.

“It gets there faster, it helps the economy there, and it lets organizations on the ground who know the needs buy things that are needed,” González-Castillo says. From experience, he can say things like, “receiving trucks of food with no process or protocol for distributing them can become a disaster itself.”

Likewise, individuals traveling to the Bahamas at this point are not helpful, unless they are with a first responder or first aid organization. That puts more people who need to be housed and fed in a situation where people are struggling for housing and food.

“People will say, ‘Oh, I can sleep anywhere,’” González-Castillo says. “But still, even in the midst of a disaster, people want to be hospitable, and they will give what they have to you, and that doesn’t need to be happening.”

As the response in the Bahamas begins to take shape, Kirk says presbyteries along the U.S. Southeastern coast are watching to see what the storm’s impact will be. 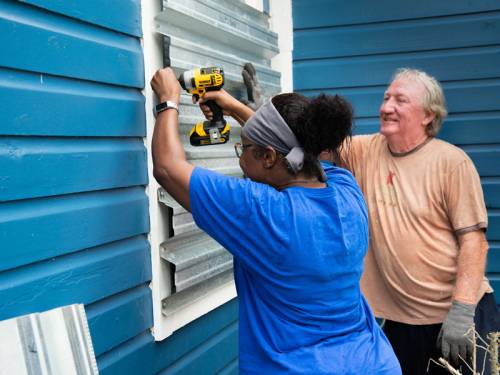 Storm preparation is something residents of the United States’ southeastern states are getting used to. (Photo by Daniel Cima of the American Red Cross)

Unfortunately, that is something residents of the Southeastern United States are getting used to as the past several years have brought a steady succession of storms. One positive Kirk sees is the level of preparedness has increased in areas such as Florida and the Carolinas, which are becoming familiar with how to respond to major tropical events.

“Areas that have flooded will probably flood again,” Kirk says. “All of the presbytery leadership are ready to do assessments once the storm passes.”

Dorian’s slow movements have allowed more time for preparation, Kirk says, but have also stoked anxiety as people weary from near annual scares watch to see where the storm will go. Because of previous storms, Kirk says some of the areas potentially impacted by Dorian already have recovery sites up and running.

Learn how to volunteer with Presbyterian Disaster Assistance

And like in the Bahamas, Kirk says the best way for people to help, at least initially, is through financial contributions.

“We expect a significant impact,” Kirk says. “Our ability to respond is a reflection of the generosity of the denomination.”