Team to assess damage from Hurricane Harvey and catastrophic flooding 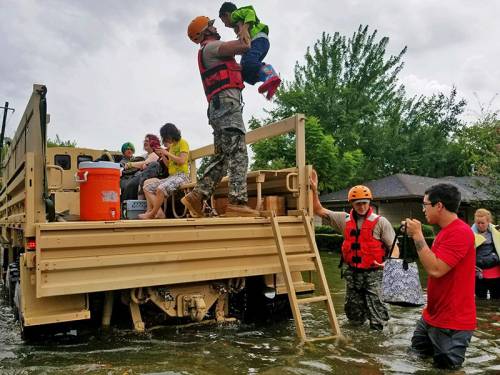 LOUISVILLE – Hurricane Harvey may have been downgraded, but the torrential rains are still pounding parts of Texas. Historic flooding has forced rivers and streams from their banks, submerged homes, churches, businesses and roads, stranding thousands of people.

Presbyterian Disaster Assistance is maintaining constant contact with Mission Presbytery and the Presbytery of the New Covenant.

“We know that in Mission Presbytery, the major impact of the storm has taken place,” said Jim Kirk, PDA’s associate for national disaster response. “Presbytery leaders are doing an assessment and addressing immediate response needs. But the latest forecast calls for torrential rains to continue for the next 48 hours so it’s still an ongoing, dynamic event.”

“A large chunk of the presbytery was impacted one way or another,” said Alan Ford, who oversees the presbytery’s disaster recovery efforts. “We’re still trying to get information on the impact of the storms and flooding because it varies from the coastline to inland communities”

Ford says it’s the worst flooding to hit the area in nearly 50 years.

“One of the problems is access to many of the flooded areas and a lot of the people have been evacuated. They don’t know what they will be going back to,” he said. “From what I’ve heard, many of the churches have been devastated by the storms and water.”

Members of PDA’s National Response Team, will be in the area on Wednesday to begin the review process.

“The team will connect with presbytery leadership to offer support, lend their efforts to assessing the damage and offer a ministry of presence to congregations as well as assist the presbytery in developing a short term response plan,” said Kirk. “They will also connect with interfaith partners on the ground.”

By the end of the week, forecasters say the Texas coastal areas could see as much as 50 inches of rain, the average yearly rainfall total for the area. The upper Texas coast and parts of southwestern Louisiana could see up to 25 additional inches according to the National Hurricane Center.

“There could be a lot of damage further inland as flooding proceeds downriver. The amount of rain we’ve seen inland has just been enormous,” said Ford. “However bad it has been for us, it’s bad or worse in the Presbytery of the New Covenant and we want to keep those folks in our prayers as well.”

The Presbytery of the New Covenant includes Houston, Galveston and Bay City among others. Thousands of people have been evacuated and thousands more are still awaiting rescue according to the Red Cross as torrential rainfall from Harvey continues to deluge the area and bring additional threat to Louisiana as well.

“Just like with Hurricanes Katrina, Sandy and Matthew, we are relying on the generosity of Presbyterians to provide financial and hands-on support to help the whole church stand with these communities and the Presbyterian families,” said the Rev. Dr. Laurie Kraus, PDA director. “This is a catastrophic event of wind and water, the likes of which Texas has not seen. In the Song of Solomon, Scripture says ‘Many waters cannot quench love, neither can floods drown it,’ and we will be there with them. Our love and partnership will be with the people of Texas for the long run.”

Kraus estimates PDA will be making a three-to-five-year commitment to help communities recover from the disaster.

Presbyterian Disaster Assistance is the emergency response and refugee program of the denomination, committed to the long-term journey of recovery of communities adversely affected by a crisis or catastrophic event. It is funded by One Great Hour of Sharing and raises designated funds for responding to specific disasters.

If you prefer to mail a check (please designate Disaster Relief – U.S. Hurricane Response, DR000169), send it to: