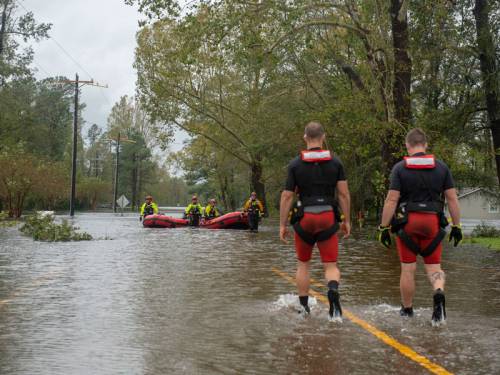 LOUISVILLE – Presbyterian Disaster Assistance (PDA) sent three National Response Teams (NRT) into North Carolina and South Carolina in the wake of severe flooding caused by Hurricane Florence. The teams deployed into the presbyteries of Coastal Carolina, New Harmony and New Hope to make initial damage assessments, meet with presbytery staff and pastors in the affected areas, and be a presence for those affected by the storm’s extreme rainfall amounts and wind damage. Flooding and loss of housing, particularly for those most vulnerable, are the biggest short-term concerns for residents of the impacted areas.

Florence dumped an estimated 30 inches of rain onto some areas of the Carolinas, resulting in 45 deaths, more than 500 rescues, and damage to roads and infrastructure including low-lying water and sewage treatment facilities. Flooded hog lagoons and coal ash dumps contaminated soil and rivers used for drinking water.

“PDA reached out to presbyteries in the path of Hurricane Florence in the days before Florence made landfall,” said Jim Kirk, associate for disaster response in the U.S. for PDA.  “PDA will continue to partner with the impacted presbyteries, congregations and communities throughout the short-term and long-term response.”

“I am concerned about the recovery,” Kirk continued. “I am concerned that many around the country will think that the damage was minor because the winds weakened significantly from what was predicted. The reality is that as the wind speed decreased, the amount of rainfall drastically increased. The flooding that occurred was historic, and the recovery needs will be monumental. My prayer is that the denomination will be generous so that we can support the impacted communities throughout the long-term recovery.”

Gail Farnham, an NRT team member who led a team into the Presbytery of New Hope, which includes New Bern, North Carolina, near where Florence made landfall, noted that housing for people who have been displaced from their homes in and around New Bern is a very real problem.

“A problem in New Bern is a lack of affordable housing,” said Farnham. “They don’t have places for people who have been removed from their homes to live. Schools were still being used as shelters during our time there, and the mayor and alderwoman confirmed there was no place to put people.”

Dave Thalman, NRT team leader, led a group into the Presbytery of Coastal Carolina, an area just north of the South Carolina border that stretches from the coast westward and includes Wilmington, Lumberton and Fayetteville. His team encountered lots of road closures, flooding and fallen trees. He noted there was extensive damage to businesses, homes, schools and churches surrounded by pockets of severe flooding.

“Because there was so much water, I’d characterize the damage as mostly flooding,” said Thalman. “Plus, the ground was so saturated from a wet summer it didn’t take much water to uproot trees that otherwise probably wouldn’t have fallen.”

Residents, some of whom were just recently getting back to normal from Category 3 Hurricane Matthew in 2016, were understandably unsure about the future.

“Those who evacuated were anxious about coming back to their homes, and those who stayed were anxious about how they were going to get food and water and their houses taken care of,” said Thalman. “Church leaders were worried how they were going to repair their churches, some of which were hit by Hurricane Matthew two years ago. So, many people were just getting back and recovering into their places when Florence hit.”

Bill Neely, a retired pastor and NRT member, deployed into the Presbytery of New Harmony in South Carolina. Neely’s team saw a more condensed damage pattern consisting of flooding with little wind damage, unlike the more widespread devastation found to the north. As is often the case, communities impacted by poverty and those least able to deal with disaster were affected the most.

“We saw pockets, mostly small communities of 50 to 100 houses completely underwater, that were decimated,” said Neely. “When we left the water was still rising and not many counties were declared as FEMA-eligible for individuals. It’s hard to get those people help and almost none of them have flood insurance.”

Neely noted that most of the affected properties were rentals and there is no more housing available in the immediate area. Hourly-wage earners and migrants are among those left without alternative options for housing and work.

“Those are the folks we hope that the Presbyterian churches and other churches in the community can rise up and help. The people living in fine houses can afford insurance, but the poor folks get left out.”

For Presbyterians or congregations looking to provide help for Florence-affected residents, there are both short-term and long-term solutions.

“Prayer is a powerful tool,” said Neely. “Congregations that want to send work teams need to go through the PDA Call Center to avoid duplication of effort.”

“The goal of long-term recovery is to meet all of the unmet needs, and at this point we don’t know what those needs are,” Thalman said. “This is going to be very long recovery; it’s going to take years, so I would urge people who want to help to be patient. There will be plenty of opportunities.  We’ll be sending NRT teams to assess churches to be potential host sites for volunteers and identifying work partners for each host site.”

That doesn’t mean work isn’t currently ongoing, and some Presbyterian pastors have committed to work together to aid their parishioners.

“The four pastors in the New Bern area are working together to support one another and identify areas of need. There is also a long-term recovery group in place there,” said Farnham.

To support recovery efforts in the wake of Hurricane Florence, click here.  You’ll be taken to the PC(USA) website to donate securely and quickly.

If you prefer to mail a check, please note “DR000194-Florence” in the memo line. You may send it to:

Presbyterian Disaster Assistance is the emergency response and refugee program of the denomination, committed to the long-term journey of recovery of communities adversely affected by a crisis or catastrophic event. It is funded by One Great Hour of Sharing and has designated funds for responding to specific disasters.