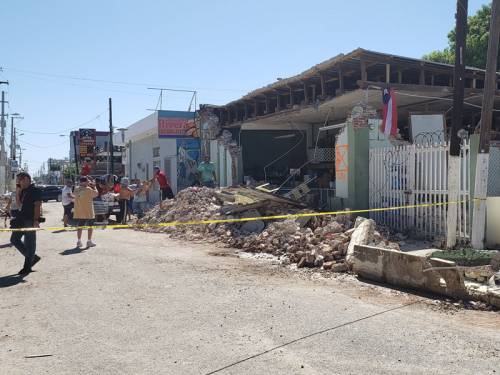 In the Puerto Rico community of Guanica, nearly 150 homes were damaged or destroyed by Tuesday’s earthquake. (Photo by Edwin A. González-Castillo)

LOUISVILLE — The Rev. Edwin A. González-Castillo was frozen, as the Earth shook.

It was Tuesday morning, and he was in Aguadilla, Puerto Rico, when a magnitude 6.4 earthquake struck just before 4:30 a.m.

The Rev. Jim Kirk, who was in Puerto Rico with González-Castillo, said, “There’s a lot of anxiety. We heard that all over the place.”

Kirk, Presbyterian Disaster Assistance (PDA) Associate for National Disaster Response, and González-Castillo, PDA Associate for Latin America and the Caribbean, were in Puerto Rico for a meeting with synod executives to look at some ongoing projects in the aftermath of Hurricane Maria. But the duo found themselves doing initial assessments of damage in the island’s latest crisis, a series of earthquakes and tremors that have been rolling through the southern part of Puerto Rico since Dec. 28. 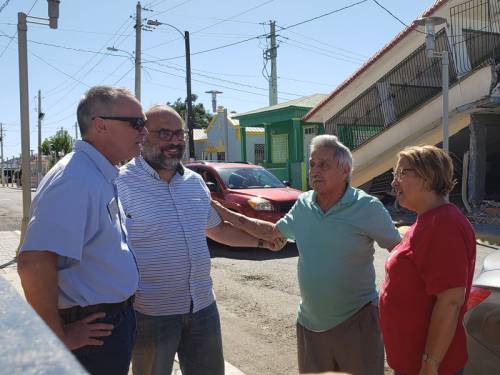 Tuesday’s quake followed a magnitude 5.8 quake that struck Monday morning, when the PDA associates were in San Juan, on the Northern Coast of the island.

Traveling into Puerto Rico, a United States territory, they found widespread structural damage, including to five Presbyterian churches, two of which they had visited as of late Tuesday afternoon. Puerto Rico Gov. Wanda Vazquez has declared a state of emergency, and much of the island is without power. Water has been cut off for nearly 300,000 people, according to CNN.

In Guanica alone, González-Castillo said 148 homes had been impacted, from structural damage to complete collapse, and Kirk added that many businesses had also been affected by the quakes.

“We noticed in Guanica that most everybody was outside,” Kirk said. “They’re outside because they’re afraid to go inside for fear of an earthquake that will collapse their structure. 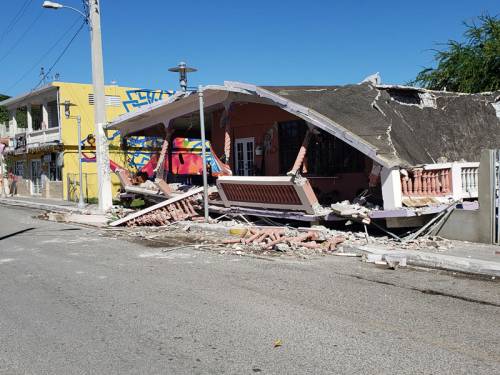 The Rev. Jim Kirk, Presbyterian Disaster Assistance’s Associate for National Disaster Response, said many Guanica residents are currently living outside because the earthquake pancaked their home. (Photo by Edwin A. González-Castillo)

“The damage that we’re seeing is pretty intense. The homes that were collapsed were just pancaked, and it’s pretty sobering to think of anyone being inside when that happens.”

Thus far, there has been only one confirmed fatality from the quakes.

While initial estimates put damage from the earthquakes at more than $3.1 billion, González-Castillo said that the events are also taking a tremendous toll on residents’ emotional well-being.

In addition to dealing with the damage and loss, unlike hurricanes and similar disasters where people can see when the storm has passed, earthquakes are far less predictable in terms of timing and strength. So residents have to live with the knowledge that another quake could strike at any time. This series of tremors has served to remind people that the Caribbean is an active seismic zone. 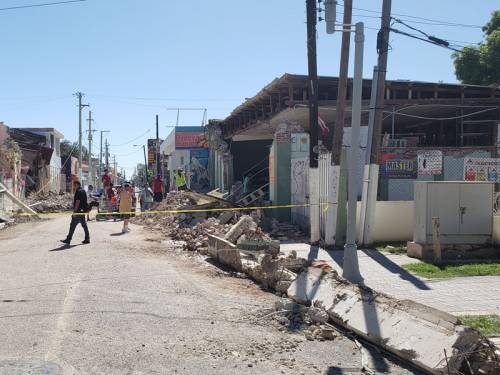 This week’s earthquakes in Puerto Rico did an estimated $3.1 billion in damage to an island still recovering from the deadly Hurricane Maria, which struck in September 2017. (Photo by Edwin A. González-Castillo)

The Puerto Rican earthquakes come just before the 10-year anniversary of the magnitude 7.0 earthquake in Haiti, on the neighboring island of Hispaniola, which killed roughly 250,000 people on Jan. 12, 2010.

“This is the second night that they have been woken up by an earthquake,” González-Castillo said on Tuesday, referencing the residents of Southern Puerto Rico. “Tonight is going to be a hard night for many people to go to sleep.”

Give to One Great Hour of Sharing to enable Presbyterian Disaster Assistance to  respond quickly to catastrophic events.

A prayer for the 10th anniversary of the Haitian earthquake