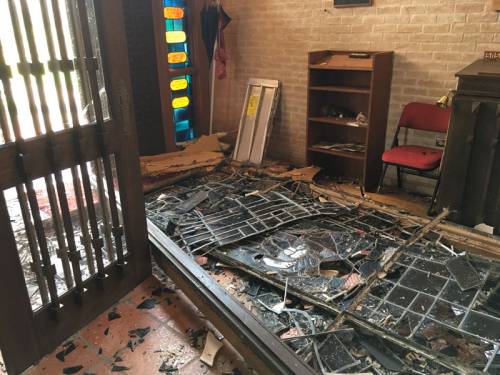 SAN ANTONIO – The road to recovery from Hurricane Harvey is just beginning in Texas. For Mission Presbytery and the Presbytery of the New Covenant, the primary task in recent days has been to maintain communication with churches and congregations in the storm’s path. Presbyterian Disaster Assistance is in the midst of a six-day visit to both presbyteries to meet with leaders and help them in recovery planning.

“We talk about ministry of presence and that was the importance of being here. Could the same thing be communicated by email or phone call? Yes,” said Jim Kirk, PDA’s associate for national disaster response. “But I think there is something tangible and grounding about being face-to-face, holding hands and praying as well as breaking bread together.”

“We make solidarity visits when we work with our international partners in times of catastrophic circumstances. There’s a formality and dignified engagement with that,” said the Rev. Dr. Laurie Kraus, PDA director. “We want to be present with our sisters and brothers, hear their stories face-to-face and let them know we honor the severity, the depth and breadth of what is happening to them. We still come representing the prayers and care of our entire denomination.” 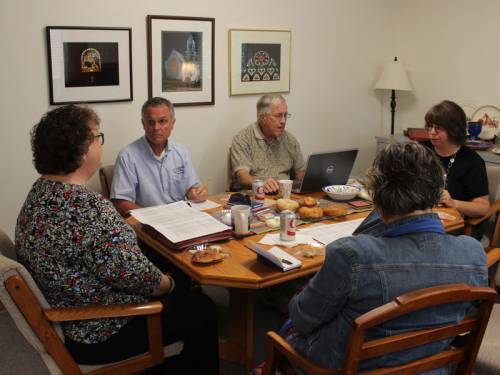 During a meeting with Mission Presbytery in San Antonio on Wednesday, presbytery leaders provided a list of churches damaged by the storm and shared stories of recovery and hope.

“We have approximately five or six churches that we are concerned about,” said the Rev. Dr. Sallie Watson, general presbyter. “A wall collapsed at the First Presbyterian Church in Refugio. The initial estimate is $700,000 for a congregation of 30. At the Community Presbyterian Church in Port Aransas, a chunk of the wall collapsed and the pastor says the ceiling is coming down around them.”

Watson said a free-standing building behind the church, used as a food pantry, was also devastated. She added that church members are trying to salvage canned goods.

Most of the churches in the presbytery report minor damage and, Watson said, many are willing to do what they can to help other churches and people in the community recover.

“I have been super impressed with their resilience. I expected more trauma,” she said. “Some have been without power but are fine. Most are asking what they can do to help.”

Kraus suggested that churches with minimal damage seek confirmation with an independent adjuster saying there could be hidden damage that they cannot see right now.

In the meantime, churches are working to help those with a greater need.

“We have six churches that have said they will serve as drop-off sites for folks that are making cleanup kits,” said Tricia Tedrow, stated clerk. “Our Mission Outreach and Justice Committee will coordinate getting those to places where they are needed. Between here and what Harvey did elsewhere and with Irma coming, there could be a run on cleanup materials.” 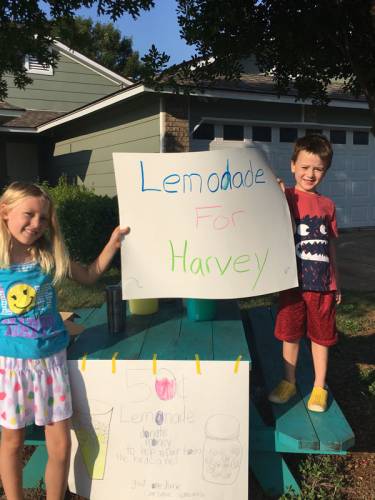 Zanna and Wyatt Allen of Austin raised $217 for hurricane relief by opening a lemonade stand at their home. (Photo by Rev. Sarah Allen)

Tedrow said she was also moved by some of the heartwarming stories she heard from churches and families willing to help. She mentioned Zanna and Wyatt Allen, ages 8 and 5, from Austin, who decided to open a lemonade stand to raise money to help people who lost their homes.

“Their parents wanted to teach and encourage their children to help, so they set up a lemonade stand and raised $217,” said Tedrow. “They also had an assembly line for hygiene kits and made 640 of the kits.”

The children’s mother is associate pastor of First Presbyterian Church in Austin.

Tedrow said she heard from a number of Presbyterians who are willing to do what they can, even while dealing with their own post-storm struggles.

“I had talked with a church in Goliad and had a 30-minute conversation with one woman,” she said. “She was so happy to hear from me and kept saying over again that she loved the Presbyterians as well as what the presbytery and PDA are doing. It was a wonderfully delightful moment in the midst of the bad news.”

On Thursday, PDA and presbytery leaders visited the impacted areas including Port Aransas, Refugio, Rockport and Victoria. PDA will head to Houston on Friday to meet with the Presbytery of the New Covenant.