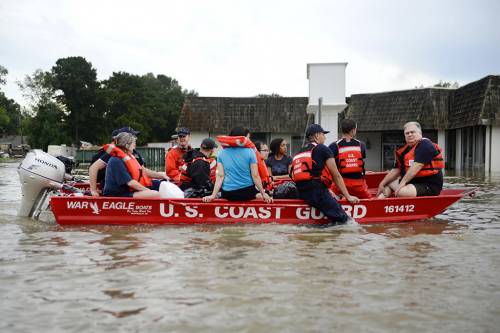 The flooding last weekend dumped nearly 22 inches of rain in parts of Louisiana and other Gulf states according to the National Weather Service. Some communities reported as much as 31 inches of rainfall.

“Presbyterian Disaster Assistance joins the whole church in expressing its sadness and extending prayerful support to our neighbors in southern Louisiana and Mississippi in the wake of the flooding,” said the Rev. Dr. Laurie Kraus, coordinator for PDA. “We are grateful for the church’s faithful past giving and support of One Great Hour of Sharing, which has enabled PDA to make financial resources immediately available to affected communities.”

The Federal Emergency Management Agency (FEMA) reports as many as 7,000 people were staying in one of 37 shelters across the region. The latest death toll is reported at 13 and state authorities are still searching homes and businesses.

The American Red Cross and other agencies say it is the worst natural disaster to strike the United States since Superstorm Sandy and some say the damage is more widespread than Hurricane Katrina.

The office of the Presbytery of South Louisiana was among the thousands of buildings damaged by flooding. Tom Tucker, the presbytery’s treasurer and assistant stated clerk says the water receded by Tuesday morning, allowing him to get to the office.

“By tape measure, we had 14 inches of water inside, right below the electrical outlets so power was not disturbed,” he said. “Everything, all of the furniture, floors, bottom cabinet drawers and shelves were soaked. The force of swelling in some of the soaked files even bent the door on the cabinet.”

Tucker said the force of the water in the parking lot moved the concrete parking blocks like “pick up sticks.” Meantime, remediation crews have come in to pull up carpet, remove drywall and begin the process of drying out.

A couple of churches have offered classrooms as a temporary office for the presbytery. Tucker and the staff are trying to secure internet service now.

“What we’ve been able to tell, we have eight Presbyterian families that have been impacted by the flood damage. We are still getting in touch with some of the churches in the surrounding areas,” he said. “Floodwaters came up so quickly that people were isolated with no where to go. Waters are down now so we are just finding out what’s going on.”

The damage was worse for the Faith Presbyterian Church, located next door to the presbytery.

“I measured 27 inches in the sanctuary. Pews and hymnals are gone, the water didn’t get to the piano but did reach the base of the organ,” Tucker said. “The education building got three and a half feet so nothing survived in there. The office and all office equipment are destroyed. Everything will have to be replaced through out the building.”

Tucker said the congregation has been invited to worship this Sunday with Highland Presbyterian Church.

Tucker also spent some time visiting with those being treated for diabetes and other illnesses at nearby medical shelters.

“The people I talked with were disoriented. They had been in nursing homes and were suddenly moved to a shelter and then moved to another shelter and moved again to a medical center,” he said. “They are compliant and thankful for the care but there’s a lot of psychological trauma that could begin to surface and that’s a heartbreaker.”

University Presbyterian Church, which did not sustain damage in the flooding, has opened its doors as a shelter for women who have just given birth.

“We did this after Hurricane Katrina. We have a partnership with Women’s Hospital and have extended that partnership with other hospitals who are sending us families with newborns,” said the Rev. Patty Snyder, church pastor. “We’ve turned five Sunday School rooms into places for families to stay so everyone can be together.”

She says they are currently hosting three families with newborns but could extend that to housing for volunteer workers in days and weeks to come.

“We have a large fellowship hall and we are trying to determine how we can use that. We could house 30 to 50 red cross volunteers if need be,” she said. “There is so little housing available. Hotels are full and trying to find a place for volunteers to go is a challenge.”

Snyder has been helping some of her members return to their homes once the floodwaters receded. She described neighborhood curbs piled with damaged furniture, carpet and other items.

“I’m driving down the road and you can see all of these businesses and homes with their furniture out by the street,” she said. “You can see the water lines on the buildings and cars that had been moved by the water. Everything has a layer of brown dust on the ground.”

Snyder was taking Cindy Burris to her home in Denham Springs. Burris was within a few months of paying off a 30-year mortgage on her house.

“Every single thing here is ruined and has been brought out to the curb. These were things that were most important, all of my family photographs going back four generations, my wedding album, video and dress, my daughter’s wedding dress,” she said. “Things like that are irreplaceable. I’m still in shock. I just lost everything after 30 years of hard work and was right at the finish line. Now it’s all gone.”

The Presbytery of South Louisiana has been contacted by FEMA to use their retreat facility for volunteer training and housing. There are also plans to begin a flood recovery ministry at the facility. Kraus says churches in Baton Rouge and neighboring presbyteries like New Covenant have been quick to offer assistance, housing for volunteers and other resources.

“Flooding has been a particularly vexing challenge throughout the south central and southeastern states for more than a year, a cascading disaster that demands a sustained long term response,” Kraus said. “I am moved by the faithfulness of the church, and think of words in the eighth chapter of the Song of Songs—‘many waters cannot quench love, neither can floods drown it.’”

Financial support allows PDA to respond to disasters as they unfold and continue the recovery long after many organizations have left. If you are interested in giving to help those suffering in Baton Rouge and the Gulf Coast, you can link here.

For more information about PDA response to the flooding, click here.