Team finds resilience among members amid the damage 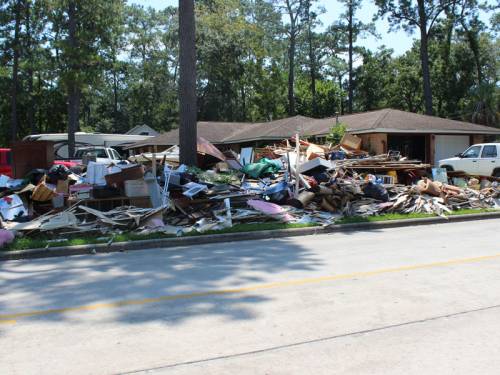 The streets of Dickinson, Texas, are lined with debris, removed from homes after flooding from Hurricane Harvey, Saturday, Sept. 9, 2017. (PNS Photo/Rick Jones)

HOUSTON – Traveling around the area, one may wonder if there was any damage at all from Hurricane Harvey. Crews have worked overtime to remove debris from the main roadways in the city, but travel 20 minutes to the south or east and you can see the evidence for miles.

In downtown Houston, there were a few reminders of Harvey, including staging areas for the Federal Emergency Management Agency or military vehicles hauling supplies. The Rev. Dr. Laurie Kraus, director of PDA; Sara Lisherness, director of Compassion, Peace and Justice; and Jim Kirk, PDA’s national associate for disaster response; joined Valerie Young from the Synod of the Sun for several meetings with pastors, ruling elders and leadership from the Presbytery of New Covenant. 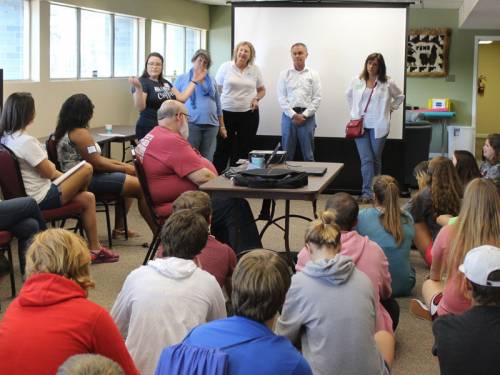 On Saturday morning, the team returned to the presbytery to speak with 50 young people taking part in the Presbyterian Youth Connection Council (PYCC), which touches 29 congregations in the Houston area. The youth came to pray, worship and begin planning for recovery work.

“What you do after a disaster response erases the differences in race and faiths,” Kraus said to the group. “We are all a part of the same human family. Disaster can help transcend those differences.”

Kirk updated the youth on PDA’s work and plans for the weeks and months to come.

“We are having conversations with churches about becoming long-term host sites for volunteers,” Kirk said. “There will be a lot of work for people to do in the coming weeks and months. In addition to funds, the communities need thousands of cleanup kits.”

PDA also heard from some of the youth and their leaders about the struggles they’ve faced and the good that has come out of it.

“We had 4 to 5 feet of water in our church. But this is the first time I’ve felt a part of a connectional church,” said Marilee Norred, a member of First Presbyterian Church in Dickinson, Texas. “It has been phenomenal to see everyone who cares about us. Churches across the country are calling us to say they support us financially and spiritually.”

PDA traveled to several churches heavily impacted by high water ranging from a foot to several feet depending on the region. After hearing an update on the work teams already in place, the Rev. Keith Uffman, pastor of Webster Presbyterian Church, said it’s important that they help their community get back to living.

“We did sprint a lot when this first happened,” Uffman said. “We need to try and maintain some normalcy in our programs and ministry.”

School resumes later this week in most of the impacted communities, including Webster.

“This will be the first time teachers are seeing their students since Harvey struck so they will be first responders for a lot of young people,” Uffman said. “We continue to pray for strength, endurance and wisdom in the coming days and weeks.”

While traveling to Dickinson, debris, damaged appliances and furniture lined both sides of the streets. Several feet of water had invaded homes and businesses in the area, including First Presbyterian Church.

“Pew cushions were everywhere and even the pews themselves were moved across the sanctuary,” said Connie Almendarez, a nurse and church member. “A large ice machine floated across the freeway and settled by the front door of the church. When I opened the door to the church, a snake came slithering out. Later, we had found a fish in the wall that had come from the bayou, which is not close.”

Dirt and sand and the musty smell of damp wood filled the air in the church sanctuary, but that wasn’t as bad as what church members found in the food pantry, located on church property.

“The water was deep and the raw meat from the freezers was floating in the dirty water. We got in there as soon as we could to clean it up,” pastor Kathy Sebring said. “We took the damaged canned goods and packages of crackers to the street to be removed by cleanup, yet people were still coming by and taking many of the items home because they were so desperate for food.”

“We had several members that were impacted by flood. Other members had family that had suffered loss,” Almendarez said. “One couple didn’t suffer flood damage, but a large tree in their yard fell and crashed through their bedroom. They were not there at the time.” 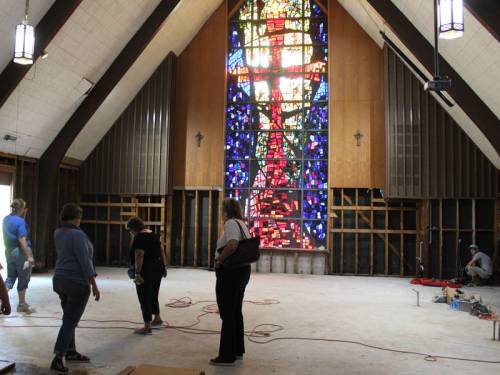 Because of damage to the sanctuary, Sunday services are currently being held in the church’s front yard.

“We had some people pass by and ask if they could take communion,” Sebring said. “One couple had just moved here the Monday before the storm and lost everything. They were very distraught and we invited them to join us. They later said they thought it might be time to get back into church.”

PDA leaders wrapped up their six-day visit to Texas by worshiping with several churches in the Houston area on Sunday. National Response Teams will be making additional visits in the days and weeks to come to support church efforts in pastoral care and setting up volunteer host sites.

“PDA is not just an office of the Presbyterian Church (U.S.A.) but the culture of the denomination,” Kirk said. “We are continually moved and blessed by churches and faith leaders who are deeply engaged in the responses to both Hurricanes Harvey and Irma.”

“Buildings and homes are devastated. The people are tired, yet resilient and hopeful,” Young said. “The church’s ability to see ways of serving their communities, in recovery and for years to come, brings hope for the future.”

“It is hard to sum up how damage impacts community. You can drive through one community in Houston and it’s fine. A few blocks away there’s a full square mile of people’s belongings rotting at the curbs of their houses,” Kraus said. “Churches of the Presbytery of New Covenant are as widely disbursed as the damage in Houston. It was an incredible privilege to see how congregations in the neighborhoods less impacted rallied for their neighbors in devastated neighborhoods.”

As work to clean up and rebuild begins, Sebring is hopeful for a new beginning in her congregation.

“We have several older members who could not get out after the storm and I pondered just closing the doors,” Sebring said. “But the day after the floods, we had 50 to 60 volunteers show up to help us and I began to think God might have other plans for us.”