Violence against women is also an issue on the mainland 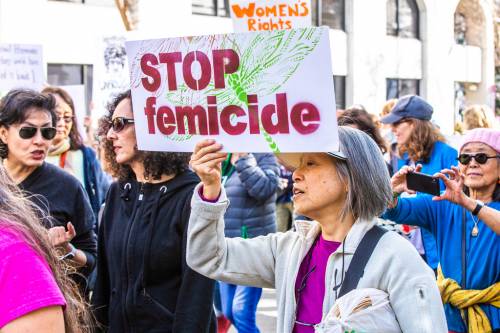 LOUISVILLE — Despite years of ongoing advocacy by civil rights activists and social justice advocates, violence against women in Puerto Rico remains an ongoing issue. In January, recently elected Gov. Pedro Pierluisi declared a state of emergency because of it.

According to the civil rights coalition Observatorio de Equidad de Género, at least 60 women were killed last year in Puerto Rico, a 62% increase in femicides (the killings of women or girls because they are female) compared to the previous year.

The January state of emergency follows the high-profile deaths of 27-year-old Keishla M. Rodríguez Ortiz and 35-year-old Andrea Ruíz Costas, who were both murdered by their partners in gruesome acts of gender violence. Costas followed all the legal procedures to protect herself, but, Pierluisi said, “the system failed her.”

The Presbyterian Church (U.S.A.) in Puerto Rico is not ignoring this matter. The Presbiterio de San Juan has issued an open letter calling on the Church to “unite our voices against gender-based violence in Puerto Rico both in public demonstrations and from our pulpits. Let’s set aside intentional spaces to discuss the issue with children, youth and adults.”

The Advocacy Committee for Women’s Concerns (ACWC) produced a joint solidarity statement on this matter and call to the Church at large. “Following the lead and hearing the voices of our Puerto Rican siblings, we are calling upon the Presbyterian Church (U.S.A.) to stand firm in our commitment ‘to provide leadership in creating a just and compassionate society’ in response to this violation of women’s safety, nurture, care, and freedom from abuse and violence,” reads the statement that was written in collaboration with a group of leaders from the PC(USA) in Puerto Rico and representatives of the Hispanic/Latino-a Intercultural Congregational Support Office; the Office of Gender, Race and Intercultural Ministries; Mujeres Hispanas Latinas Presbiterianas; Presbyterian Women in the PC(USA) Inc.; and Presbyterian Disaster Assistance. The document has 18 signatories, and it can be found here.

The Rev. Madeline Álvarez, moderator of the Education Committee Presbiterio del Noroeste and one of the leaders who collaborated in the statement, says this is an issue that has impacted the island for decades.

“Currently I’m gathering information,” said Álvarez. “Hopefully soon I’ll be able to meet with my group here and see how we can start having educational meetings with [church] leadership and anybody that’s interested. But the main idea is that it should not stay with the leadership. The idea is that pastors can take it to the churches because we need to educate everyone on gender violence.”

Álvarez says the presbytery plans to use Bible studies around the issue of gender violence. “First we want to gather the experts. We can then have workshops. After we educate leadership, then that can trickle down to the congregations. This is a long-term project, and I may not see the change in my lifetime.”

“We are demanding that the Church be vocal about this issue,” Muñiz-Vega said. “We acknowledge that we are part of a system that oppresses. We also want to acknowledge that we want to follow what our faith calls for and that is to love and to demand justice for people, especially people in vulnerable situations.”

The Mesa de Diálogo Martin Luther King Jr. also partners with other NGOs active in social justice advocacy. “It has been a great opportunity for us faith leaders to pay attention to the work done in the trenches, outside of our ecclesial spaces, and reflect on how we can learn from them and support their efforts,” Muñiz-Vega added.

The Rev. Danilie Hilerio, moderator of the Sínodo Presbiteriano Boriquén en Puerto Rico, said, “We have been working with the Presbyterian Church (U.S.A.) Office of Public Witness (OPW) for the United States Senate to reauthorize the Violence Against Women Act.”

Hilerio says the synod has also been in conversation with the Rev. Rosa Miranda, associate for Hispanic/Latino-a Intercultural Congregational Support Ministries in Racial Equity & Women’s Intercultural Ministries, and Vilmarie Cintrón-Olivieri, co-moderator of the 223rd General Assembly (2018), and the ACWC in the development of the aforementioned joint statement.

“We stand for social justice for brothers and sisters regardless of their gender,” said Hilerio. “We are also working with Presbyterian Women Inc. (PW) on issues related to violence against women. PW is the forerunner in educating about violence against women and proactive in advocating for women and giving them a voice within their church.”

Hilerio says they will remain in ongoing conversation because there is still much to be done. “We will continue to work with OPW because violence against women is not just an issue in Puerto Rico but a situation on the mainland as well.”