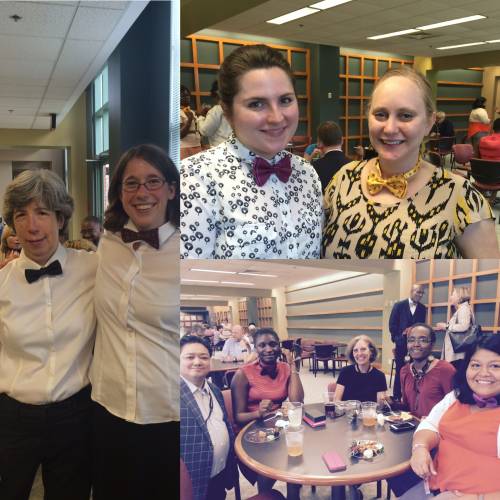 LOUISVILLE – The Rev. Dr. J. Herbert Nelson, II was welcomed to Louisville by staff at the Presbyterian Center today with a flourish of bow ties – a signature wardrobe item of Nelson’s – provided to attendees by the Presbyterian Foundation.

Nelson, former director of the Presbyterian Church (U.S.A.) Office of Public Witness in Washington, D.C., was elected as Stated Clerk by the 222nd General Assembly of the PC(USA) this past summer in Portland, Oregon, and recently made the transition to Louisville to join the national staff of the denomination.

“My belief, inherently, is that our best days are yet to come,” Nelson said. “We have challenges, but mainline Protestantism and the church across the globe, particularly here in the United States, have many challenges. We’re not the only ones. We are not alone.”

“But I’m also convinced the power to transform this church is truly within Jesus Christ, who is our lord and savior, who gives us abundantly more than we could ever have and do for ourselves,” he continued. “The challenge is for us to believe we can transform the work of this denomination in significant ways with others on the ground – in villages and hamlets, small towns and big cities, and also in ministries that are not necessarily church houses – who are witnessing to the faith of Jesus Christ each and every day.” 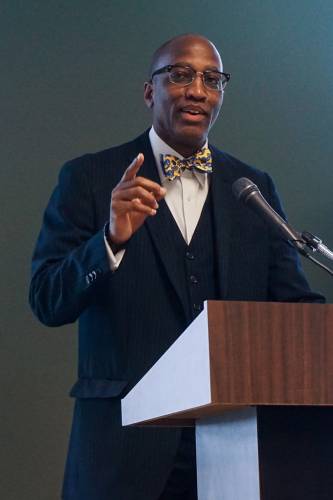 Nelson encouraged staff from the PC(USA) entities that occupy the Presbyterian Center to consider themselves one staff, not member of their various agencies. “We are not OGA [Office of the General Assembly] or PMA [Presbyterian Mission Agency], we are in the mind of people out in the church ‘that national office.’”

Sara Lisherness, director of Compassion, Peace and Justice, welcomed Nelson and led a communal prayer for him. Recalling her introduction to him as a candidate for his previous position at the Office of Public Witness, she said, “It was six years ago that I had the opportunity to interview J. Herbert for the position he is just departing. From the very first minute I understood, in new ways, what call means.”

The son, grandson and nephew of Presbyterian pastors, Nelson’s election to the post was historic. In the more than 300-year history of Presbyterianism in the United States, he is the first African-American elected as the top ecclesial officer of the denomination, which is more than 90 percent white.