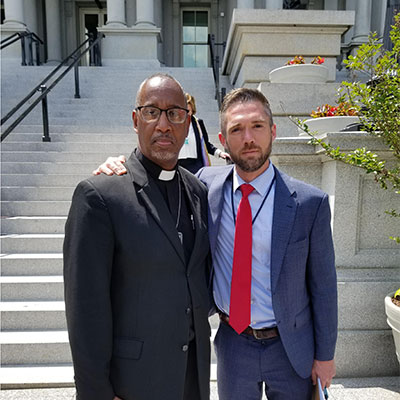 LEXINGTON, Kentucky — Wednesday afternoon, the Rev. Jimmie Hawkins represented the Presbyterian Church (U.S.A.) at the White House for an ecumenical roundtable on reproductive rights. The meeting was a chance for faith leaders from several faith traditions and denominations to talk with the White House Office of Public Engagement about what they are hearing from their communities and activities they are engaged in regarding reproductive rights.

“I reiterated the fact that we, since at least 1970, have been very much in support of a woman’s right to choose,” Hawkins said of Presbyterian General Assembly policy on reproductive rights and abortion. “I mentioned that it’s a pastoral issue, that we, rather than standing in judgment of anyone, we really need to stand beside women who are struggling with their situation of having a pregnancy that they’re really struggling with how to continue how to go forward, and that we really need to offer counsel of the unconditional love of God for all of us.

“We all need to understand that God is available to us … and as people of faith that we need to stand with women where they’re faced with such a dire situation.”

You can see Hawkins’ interview with Presbyterian News Service above or by clicking here.

“We were all in agreement that we wanted to protect reproductive rights,” Hawkins said. “We wanted to make sure that Roe v. Wade was not overturned, and it was common agreement around the table on that. But we really shared from our own theological and biblical perspective on why it was important.

“One of our focal points is that God is the Lord of the conscience, and that each person within their own conscience has to make the decision that they feel is best for their life at that particular moment in time. I talked and tried to focus on our perspective, but also sitting and listening and learning from other perspectives as well.” 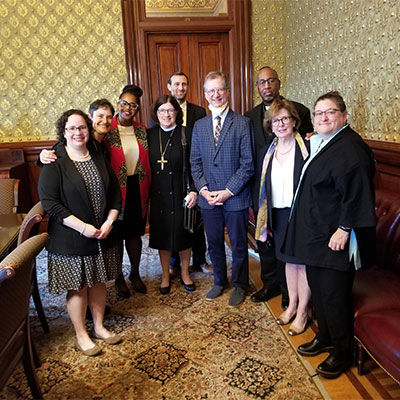 The Rev. Jimmie Hawkins (third from right) is with other ecumenical leaders at the White House for a roundtable with the Office of Public Engagement. (Photo courtesy of Jimmie Hawkins)

Hawkins said that under the administration of President Joe Biden, the White House and Dickson have been very open to hearing from faith leaders, even soliciting their input, on a variety of issues.

The Wednesday conversation, Hawkins said, focused on reproductive justice, and that the greatest impacts of a repeal of Roe would fall on people in communities that have been marginalized.

“It’s an issue of life and death for poor women, for marginalized women, for women of color, and we know that it will put people’s lives in danger,” Hawkins said.

Hawkins said it is a time for Presbyterians and like-minded people to speak out and let their elected representatives know they support reproductive freedom and engage in the cultural conversation around the issue with a compassionate voice.

“God is with us each and every day, and especially during times when we have to make difficult decisions,” Hawkins said. “I’m hoping that the Church will lift up a compassionate voice, because right now the reputation of people of faith in this country is very negative — that we’re judgmental, we’re intolerant, we want to basically have the right to refuse service to people whose sexuality with whom we disagree. And that’s not who we are called to be. As followers of Jesus Christ, we’re called to love the Lord our God, love our neighbor, and love ourselves.”