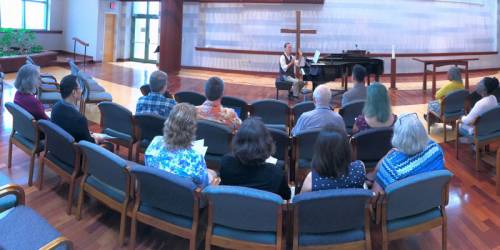 Although Chopin could not have envisioned it when he was composing his Études in the early part of the 19th century, among the worshipers’ prayers Wednesday were prayers for peace and reunification on the Korean Peninsula.

Aug. 15, Liberation Day from Japanese colonization in both North and South Korea, marks the day for prayer and peace and reconciliation. A World Council of Churches resource uses Psalm 34:14 — “Seek peace and pursue it” — as a theme for the Aug. 11 Sunday Prayer Worship for Peaceful Reunification of the Korean Peninsula.

Included in the resource is a joint prayer for peaceful reunification, which states in part: “Lord, we were divided by foreign forces” which “turned a blind eye to our aspirations in pursuit of their own interests. The excitement of Korea’s independence soon became a painful part of our history. O Lord, listen to our prayers that we may become one again.”

“Lord, hear the prayers of the beloved Christians throughout the world for peace and prosperity of the Korean Peninsula. May the people of the North and South/South and North meet each other with a smile, and may North Korea and the U.S. establish a peace treaty by ending the state of hostilities … Now in this moment, give us faith with the ability to love. Let the fervent prayers of Christians all over the world bloom in our hearts, and in every corner of the Korean Peninsula as a flower of hope.” 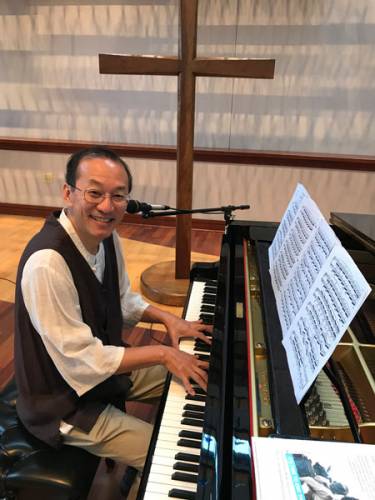 The Rev. Dr. Paul Huh is Korean translator for the PC(USA) A Corporation. He led worship in the Presbyterian Center Chapel on Wednesday. (Photo by Tammy Warren)

Huh introduced Op. 25, No. 1 by saying it reminds him of supernatural activities achieved to date only by Jesus and Peter: walking on water. He said he tries to remain fearless as he plays the difficult pieces.

“If you are afraid,” he said, “you just plunge right into the water.”

The “Sadness” piece has a slightly sad memory for the Huh family. One day Paul was practicing the piece, which includes a ringing portion that sounds like a doorbell being rung. When he finished the piece, he heard his real doorbell ringing. His wife, who’d been shopping, was less than thrilled that she had to wait so long to be let into her own house.

“I couldn’t hear her through the doorbell music,” he said. 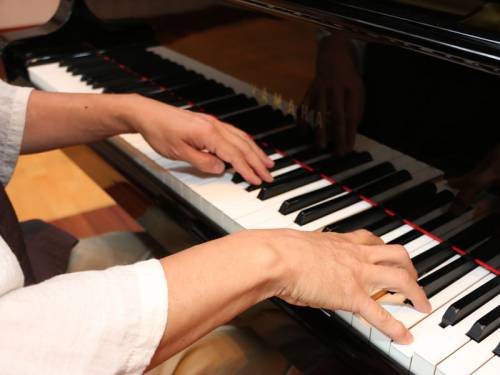 Huh said he enjoys playing the piano in the chapel of the Presbyterian Center. A Korean pastor donated the instrument. (Photo by Tammy Warren)

Chopin wrote “Revolutionary” from France after Russia had invaded his partitioned homeland, Poland, in 1830. The next year, Warsaw was evacuated after a two-day assault by Russian forces, the final episode in what became known as the November Uprising.

Originally, Chopin called this piece “Étude on the Bombardment of Warsaw.” Huh said he could imagine how Chopin felt. He called the chapel at the Presbyterian Center “a very special place for me” in part because it has a piano donated by a Korean pastor.

“This chapel really helps me to remember the messages of ‘never again’ and ‘no more war,’” he said