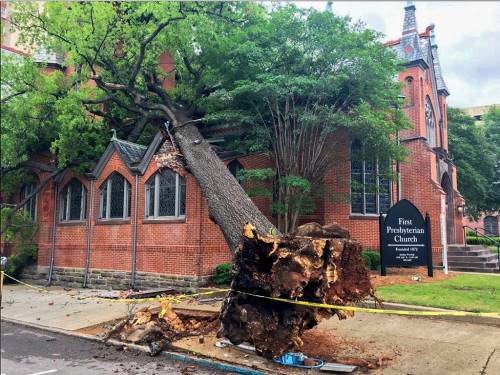 An uprooted tree rests on the roof of the First Presbyterian Church of Birmingham following high winds. (Photo by Debbie Hamrick)

LOUISVILLE – A series of storms in the past few weeks have caused a number of problems for residents across the Midwest and the South. From early April until last week, thousands have been left without power while some businesses and churches have been damaged by fallen trees, high winds and flooding.

Two Presbyterian churches in Alabama were the victims of fallen trees. The first one fell on the Montevallo Presbyterian Church around April 3.

“This was a very large tree in a neighbor’s yard. Because of heavy rain and the straight-line winds, the tree blew over and crashed through the church sanctuary,” said Jay Wilkins, transitional presbyter at the Presbytery of Sheppards and Lapsley. “The tree took out half of the roof. Crews will have to take the building down to the floors and figure out how to start all over again.”

Wilkins says the congregation is currently worshipping in a church-owned house three doors down.

Two weeks ago, another tree fell on the First Presbyterian Church of Birmingham during high winds.

“Meteorologists say a ‘wave front’ or straight-line winds brought the tree down on the church,” said Wilkins. “It crushed part of the roof on the chapel and caused damage to the bell tower. They still need to determine how much damage was done and whether there is damage to the foundation.”

The congregation is still able to worship in the sanctuary. Despite the damage, Wilkins says this is not the worst they’ve seen.

“Five or six years ago, there were a number of tornadoes that caused a significant amount of damage in the Tuscaloosa area,” he said. “Last year, we had a tornado in south and west Tuscaloosa, but this has been relatively minor compared to that.”

Wilkins says there is a bit of irony in what has happened with the two churches. “The moderator of our presbytery is the pastor at First Presbyterian in Birmingham, while the vice moderator is the clerk at Montevallo. We may not be able to recruit leaders of the presbytery anymore.”

In Missouri, the biggest problem was high water.

“We had anywhere from 8 to 16 inches of rain in two days. We had 8 or more inches of rain two weeks before, so the ground was already saturated before the last storms hit,” said Susan Rosenbaum, pastoral presbyter with John Calvin Presbytery in Missouri. “The water had no place to go and since it is considered surface water, flood insurance doesn’t cover it.”

Rosenbaum says the biggest challenge in the past week has been the slow process of getting disaster declarations and movement from disaster relief agencies in the communities. Because of ground saturation, the water has been slow to recede, making it difficult for crews to come in and clean up. 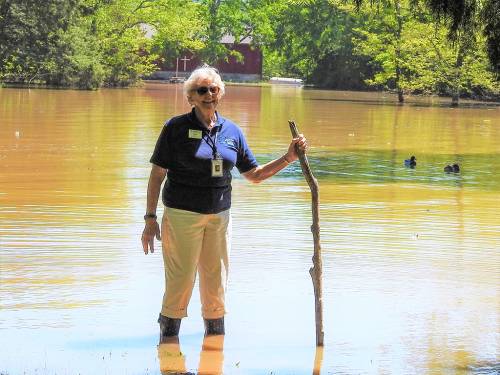 “The National Response Team from Presbyterian Disaster Assistance visited West Plains, which was hit hard by the floods, but the community’s response was not organized,” she said. “I get answers three or four days later. I understand they are busy but I’m trying to get disaster response funding and I need to have information to make that happen.”

Rosenbaum says they did have a report of one tornado south of Shell Knob that took down some power lines and trees but that was the only report from the latest batch of storms.

“There has been some wind damage, but by far the biggest problems have been flooding. I have six churches that have been damaged by high water,” she said. “Hideaway Presbyterian Church is located on a lake and crews still can’t get in to assess the damage. While we can’t get in, we envision a lot of mold problems.”

Most of the damage to the other churches has been confined to the basement level.

“In West Plains, the hardest-hit area, more than 100 families are in need of assistance. All of the prepared disaster buckets were gone in two days,” said Rosenbaum. “There are a lot of rental properties near the river and these are tenants who can least afford to be displaced. The floods also managed to take out a few businesses in the area and that impacts the economy because people can’t work until those businesses are cleaned up.”

Since the storm outbreak, Presbyterian Disaster Assistance has been in contact with affected presbyteries.

“PDA has worked to reach out and support those in the path of the storms, offering initial support to eight presbyteries,” said Jim Kirk, PDA associate for national response. “The initial offer has resulted in three National Response Team deployments and two emergency grants awarded.”

“During the past few weeks, I have heard over and over how thankful our mid-council staff and congregational leaders are for the connectional church,” said Kirk. “Receiving a call or an email offering support reminded those on the front line of disaster that they are not alone. They were encouraged by knowing there are sisters and brothers in Christ around the country ready to help when needed.”

Wilkins credited PDA for its quick response following the storms adding that congregations in the impacted area are very appreciative.

“The people are good Reformed Presbyterians. They understand the building is not the church, but the people of God are,” he said. “There is a sense of sadness over the damage, but grateful for good insurance. Despite all of that, the ministry of Christ goes on.”

Those interested in supporting cleanup efforts in the impacted areas can give through PDA to DR000015 and by collecting clean-up buckets.

Presbyterian Disaster Assistance is able to respond to emergencies because of gifts to One Great Hour of Sharing and designated gifts.