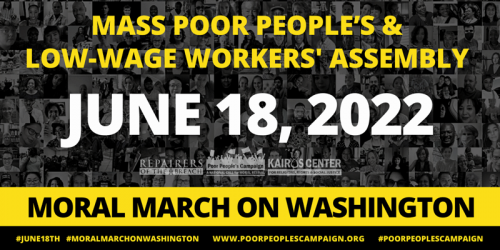 LOUISVILLE — Presbyterians and other people of faith are being encouraged to begin making plans to participate in a march and assembly of poor people and low-wage workers that the Poor People’s Campaign will hold this summer in Washington, D.C.

The Mass Poor People’s & Low-Wage Workers’ Assembly & Moral March on Washington and to the Polls will be June 18. It is a declaration of a movement designed to build power, shift the political narrative and make real policies to fully address poverty and low wealth from the bottom up, according to the Campaign’s website. (Watch video)

“We are going to have thousands of people from all across the country, and people from Washington D.C.,” said the Rev. Dr. Liz Theoharis, a Presbyterian pastor who co-chairs the campaign with the Rev. Dr. William J. Barber II.

“We will try to put the pressure on the candidates that are running to take up the issues that are impacting poor and low-income people and put them at the center of our political discourse and action,” said Theoharis, adding that they’re also urging affected people to get involved.

“When those that are most impacted by injustice are able to come together and band together with clergy and people of faith and conscience, that’s when we’ve seen this nation make change for the better for everybody,” she said.

Issues of concern include the abridgement of voting rights, the denial of living wages, the lack of expansion of health care and millions of people living in poverty. Other priorities include fighting systemic racism, ecological devastation, militarism and false narratives connected to Christian nationalism. 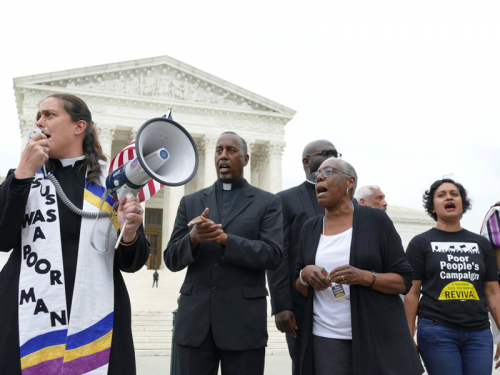 “The June 18th PPC event in D.C. will continue to highlight the need for systemic evolution in the United States,” said the Rev. Jimmie Hawkins, Associate Director of Advocacy in the Presbyterian Church (U.S.A.). “We have come too far in the advance of voting rights and civil society to allow those who are misguided to turn back the clock. Healthcare and a living wage must be considered rights and not just for the privileged few. The attack on voting rights throughout the country will only be reversed if people of faith demonstrate their determination to stand with those most impacted.”

Every state will be represented at the event, and speakers will share how people have been affected by injustices, but there also will be solutions lifted up.

As part of the Third Reconstruction, “there’s a resolution that was introduced this past spring by Reps. Barbara Lee and Pramila Jayapal,” Theoharis said. “It’s a resolution that was introduced to Congress, to the House, putting forward many of the issues  … that our society is facing, but also coming forth with a comprehensive kind of policy response, and we’ll continue to build on that for the June event, where we can really lay out both the connections between these different problems that people are facing, that COVID has revealed and further and further deepened, as well as the other kind of injustices that are so central in our lives right now.”

Theoharis, who directs the Kairos Center for Religions, Rights and Social Justice at Union Theological Seminary, would like to see fellow Presbyterians among the allies in attendance.

“As a Presbyterian, (I’m) really hoping that we can get massive turnout from Presbyterians all across the country to see that this is the time for us to stand up for a real solution to so many of the problems that people are facing, and that we have an obligation, really, to follow the commandments and the instruction from our sacred texts and from our tradition and stand on the side of justice and truth and peace and love.”

Similarly, Hawkins said, “Presbyterians are called to join with Methodists, Baptists, Episcopalians, Jews, Muslims, and others of faith from around the world to gather in the nation’s capital called by a just God of all people. We must make our presence known through joining with others who are determined that the call to justice be fulfilled.”

To find a transportation map and more details about the event, go here.