Make A Donation Click Here >
Home › Poet in the pulpit

COVID-19 lament covers everything from A to Z 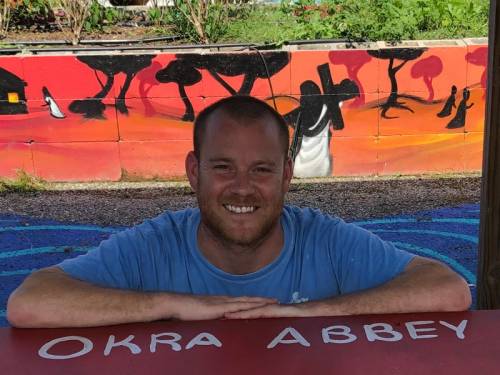 The Rev. Crawford Brubaker planted the “1001” community Okra Abbey in New Orleans in 2016, before moving in 2019 for his wife, Lane, to plant Hagar’s Community Church in a women’s prison facility in Washington state. Courtesy of Crawford Brubaker

LOUISVILLE — As the Rev. Crawford Brubaker began working on what would be his new book, “Alas! A Lament for the United States of America,” he remembers tossing page after page of paper into the garbage.

Each piece — squeezed into a ball — contained some of the pain he felt due to the pandemic.

It was during Holy Week when Brubaker, a PC(USA) minister in Washington state, began to write his liturgical lament that would eventually become “Alas!” But the working title, “The 12 Stages of the Coronavirus,” wasn’t hitting the right notes.

“I kept crumbling up stuff,” he said.

He hadn’t processed his own grief enough and was still searching for the right form to express his feelings. But he kept thinking about family members suffering from depression and the entire country that was going through some form of mental grief.

Then in the summer he read how the book of Lamentations in the Bible — written in response to the destruction of Jerusalem in 586 B.C.E. — is poetry in alphabet acrostic form. Chapters 1, 2 and 4 have 22 verses. Each verse — which has three lines — begins with letters of the Hebrew alphabet. And Chapter 3 takes it to the extreme, by intensifying the acrostic, with 66 verses.

“Using our alphabet, each verse would be AAA, BBB and so on,” Brubaker said.

As he learned more about Lamentations, Brubaker discovered again what he loves about the Bible — the echoes that are found within it. Because Lamentations drew so much from Jeremiah, Job and the Psalms, it led him to many other places in Scripture where more than 200 references to “Alas!” are contained.

Inspired, Brubaker began to plug away at his liturgical lament. After writing the first chapter, he thought, “This is odd.” But his wife, Lane, who pastors Hagar’s Community Church, encouraged him to keep going, saying, “This is important; you need to write this.” 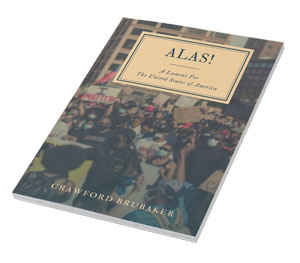 Cover of “Atlas! A Lament For The United States of America”

Six weeks later, Brubaker had a draft of his modern-day poetic interpretation of Lamentations and the great calamity that had fallen on United States. Where the prophets railed against the rich getting richer, the poor getting poorer — and saw how leaders had fallen away from God.

As he wrestled with questions like, “Where is God in the midst of calamity?,” “Why do the poor suffer more than the rich?” and “Is it too late to repent?,” the alphabet acrostic in the fifth chapter — like Chapter 5 of Lamentations — disintegrates.

“But a new acrostic is born, and it reads, ‘Lord, Great is thy faithfulness,’” he said. “For me, writing Alas!’ was like a spiritual practice of prayer. At some point it felt like a voice was speaking for not just me and my family, but the entire country.”

Brubaker sent a few of his favorite quotes from the poem with notes about what he was thinking and feeling as he wrote these words:

Weeping without ceasing
I have emptied myself of tears.

My groans are many, my lament from A to Z.
What have I done to deserve the suffering that has come to me?

I’ll let it be, O Lord, for you are in the right
I’ve rebelled against the world and now destruction is my plight.

— Here’s an example utilizing the concept “my lament is from A-Z” … and illustrating the pain the poet pours out.

Just remember … the nurses and the doctors and the CNAs. Put yourself in their scrubs and grieve with them;

Hospital hallways overflowing with humans, sick and dying,
Praying PPE provides protection and that there’s enough room in the morgue.

— My sister-in-law is a nurse and she’s been pregnant throughout the pandemic. I know she has been put in some pretty terrifying positions as she’s been forced to walk the line of keeping herself (and her baby) safe and keeping her job. I also thought of all the health-care workers in hospitals in places like New York City where they were using refrigerated trucks to store the dead bodies — and how much lasting trauma they will be left post-pandemic.

Hot anger and resistance flow like lava through the cities at night. “Hey hey! Ho ho! These racist systems have got to go!”

—  I remember marching through the streets of New Orleans in protest with my wife and our dog Justice after the death of Eric Garner, chanting “Black Lives Matter!” and this chant in the last line of this verse. The protest chants are the sounds that I will forever remember from 2020 — voices raised in the street, crying out for justice.

Pre-order “Alas! A Lament for the United States of America” and receive a copy of the e-book — which is available now — while you wait for the 40- to 50-page paperback book from Cyclical Publishing to be delivered.

One hundred percent of the profits of “Alas!” will be donated to Hagar’s Community Church, a new worshiping community in the Washington Corrections Center for Women — which is the largest prison for women in the state and the only one that houses maximum- and minimum-security inmates.