Episodes 4-6 of the third season of the New Way Podcast includes conversations with, from left to right, the Revs. Lane Brubaker, Grace Kim and Miriam Mauritzen, leaders in, respectively, a worshiping community in prison, an indoor skateboarding park and a rural Appalachian community. (Contributed photos)

LOUISVILLE — The New Way Podcast began dropping episodes for its third season last month with its first ever holiday episode.

Episode 1 features a conversation between the host, the Rev. Sara Hayden, and the Rev. Jeff Eddings. Founder of  Hot Metal Bridge faith community in Pittsburgh, Eddings is now the coaching associate for the 1001 new worshiping communities movement.

During the podcast, he and Hayden converse about contemplative spirituality and just church. Eddings shared some anecdotes from his life as church planter, including one rather funny “Christmas Eve eve” story.  He also said that when he went to seminary, he was trying to answer the question, “Is this anything?” 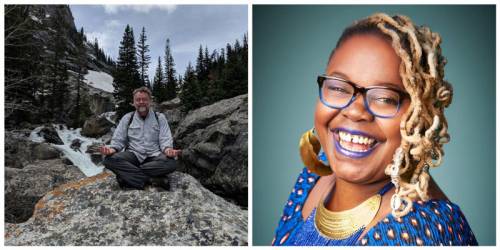 In Season 3’s first episode, the Rev. Jeff Eddings shares funny moments from holiday worship services held at the Hot Metal Bridge faith community, which he co-founded in 2004. In episodes 2 and 3, the Rev. Aisha Brooks-Lytle, executive presbyter for the Presbytery of Greater Atlanta, discusses her views on spiritual warfare. (Contributed photos)

Brooks-Lytle, who planted The Common Place Ministry in Philadelphia, told Hayden her spiritual practices and experiences have led her to believe that gospel work is very, very serious.

“I don’t want to get too fancy or too smart that I don’t remember that sometimes evil tries to encroach on God’s activity in the world,” Brooks-Lytle said.

Episode 4, which dropped January 13, features the Rev. Lane Brubaker.  She was called by Olympia Presbytery to join in planting a new worshiping community at the Washington Corrections Center for Women in Gig Harbor.  Hagar’s Community Church is inside the  largest prison for women in the state — and the only one that houses maximum- and minimum-security inmates.

Brubaker tells Hayden that women who are incarcerated have a very strong resolve.

“People have said some pretty awful things to them, so the fact that I’m there caring and having a human-to-human relationship with them gives them a lot of comfort,” she said.

Episode 5, which drops Jan 20, features a conversation with the Rev. Grace Kim. The Korean clergywoman is the new “Lead Honker” of Wild Goose Christian Community in Indian Valley, Virginia.  And episode 6, on January 27, features the Rev. Miriam Mauritzen of Serious JuJu, a community for skateboarders and those who love them in Kalispell, Montana.

Hayden said that in the final three episodes — whether from a prison in Western Washington or in the remote corner of the Appalachians in Southwestern Virginia, or at an indoor skateboarding park in Northwest Montana — one can almost picture the room where each ministry takes place.

The New Way podcast is produced by Atlanta-based artist and pastor Marthame Sanders, who also hosts the weekly podcast Aijcast, which is part of the 1001 New Worshiping Communities movement. He said he increasingly finds himself listening to Hayden’s interviews not just to make edits, but for what he can glean from folks doing church planting work.

For a free subscription to New Way, so that each new episode of season three is downloaded to your listening device, click here (for iTunes) or click here (for Stitcher).

You can also listen directly from the website after each weekly episode is dropped.

If you need information on how to listen to a podcast, click here.

Sanders and Hayden want to learn more about podcast listeners — and why they’re drawn to New Way. They want to know if it’s for technical expertise or inspiration — or are listeners simply passing the time on their commute.  Participating in this survey will help them shape future episodes.