Friday’s move will also aid the Office of the General Assembly, Presbyterian Center renovations and Triennium 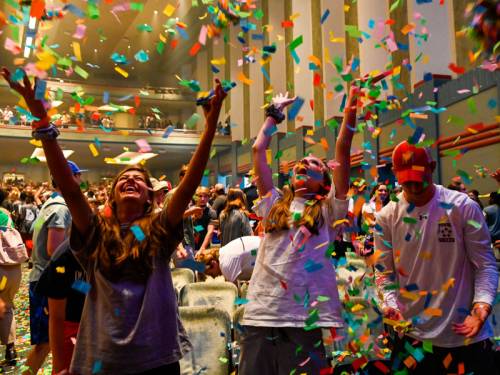 The Presbyterian Mission Agency Board voted Friday to allocate $246,000 to the Presbyterian Youth Triennium to help offset COVID-related expenses. (Photo by Rich Copley)

LOUISVILLE — During the final day of its three-day online winter meeting, the Presbyterian Mission Agency Board voted to allocate $9 million from unrestricted reserve funds for three purposes:

The board also approved allocating $246,000 from unrestricted reserves to a board designated fund to offset COVID-related expenses anticipated to be incurred by this year’s Presbyterian Youth Triennium.

The Rev. Dr. Diane Moffett, the PMA’s president and executive director, said the Center for Repair will receive a lion’s share of the funding — about $5 million.

“We want to make a substantial investment healing historical harms,” Moffett told the board, which met online. “We see the center as a place to network,” a place where congregations and mid councils “can talk about repair. It’s for the entire church.”

“It’s not for people to sit in a seat of guilt,” Moffett said, “but for people who want to move.”

Dr. Corey Schlosser-Hall, the PMA’s new director of Rebuilding and Vision Implementation, had a story about the kind of work the center could undertake — an example taken from his previous job as executive presbyter for the Presbytery of the Northwest Coast. With research help from the Presbyterian Historical Society, a committee determined that what had been seen as a merger between a white congregation and an Alaska Native congregation in Juneau during the early 1960s was more a case of the Native church giving up its pastor and property. “The merger wasn’t all that mutual,” Schlosser-Hall said.

When made aware of the research, the congregation “crafted a remarkable plan for repair,” he said. That work of repair is being sent along to the 225th General Assembly. “This is something already in place in one little corner of the big planet we are part of,” he said.

“It’s not enough for us to confess it,” Moffett said. “You’ve got to face it, but you also have to fix it. We know there are many models, and we want to gather the models.” 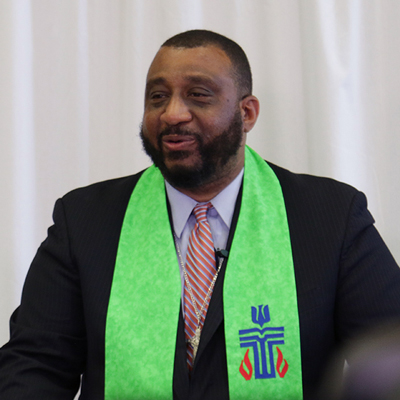 The Rev. Gregory Bentley is Co-Moderator of the 224th General Assembly (2020). (Photo by Randy Hobson)

“We are serious about divesting ourselves of an empire consciousness and taking on a kingdom consciousness to be clothed in Christ,” said the Rev. Gregory Bentley, Co-Moderator of the 224th General Assembly (2020).

While the ABCs of the church — Attendance, Building and Cash — have their place, there’s something even more important going on, Bentley said: noticing what God is up to.

“This work positions us to see what God is doing and allows us to answer with a resounding ‘yes,’” Bentley said. “I’m going to invest myself fully in this process. I believe God has gathered all of us for such a time as this, for a new outpouring of the Spirit on the church.”

The board also gave its approval to the 2023-2024 Mission Work Plan; identity, vision and mission statements; a list of values for the work of the agency; the Executive Director’s Office responses to referrals from the 224th General Assembly; and the cross-agency antiracism policy.

Ruling Elder Linda Badger Becker, chair of the Special Offerings Review Task Force, said the five-member task force, which has since been dissolved, studied aligning the PC(USA)’s four Special Offerings with the Matthew 25 foci of building congregational vitality, dismantling structural racism and eradicating systemic poverty. “The closer we looked, the more we became aware of the need and opportunity for change,” she said.

The task force has two recommendations. The first is to keep One Great Hour of Sharing in place and to continue the allocation as it is: 32% each to Presbyterian Disaster Assistance and the Presbyterian Committee on the Self-Development of People and 36% to the Presbyterian Hunger Program.

Its second recommendation is for the board to consider a comprehensive reshaping of the other special offerings — the Pentecost, Peace & Global Witness and Christmas Joy offerings — in order to develop a unified vision within each offering that more closely aligns with the Matthew 25 call to action.

The board approved both recommendations and will elect the next Special Offerings Review Task Force this fall.

The board approved a recommendation by the Committee on Mission Responsibility Through Investment to add five energy companies — Chevron, ExxonMobil, Marathon Petroleum, Phillips 66 and Valero Energy — to the General Assembly’s Divestment/Proscription List.

Rob Fohr, director of Faith-Based Investing and Corporate Engagement, said he and Katie Carter, associate in the same office, recently met with representatives from a state pension fund with a $250 billion portfolio that’s considering a similar approach.

“This could move the needle with some other companies,” Fohr said.

Greetings from the Stated Clerk

“Recalibrating, rethinking and rebuilding is not as difficult as we think it is,” the Rev. Dr. J. Herbert Nelson, II, Stated Clerk of the General Assembly of the PC(USA), told the board. “Right now we have the agency to move forward together. The question is, do we have the will?” 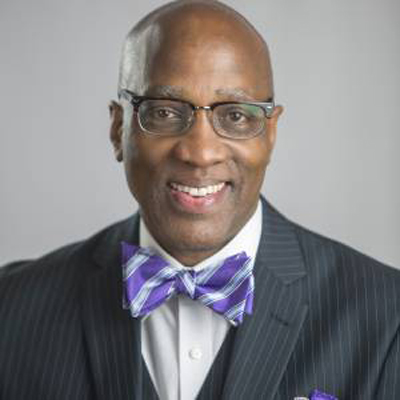 “Who does God love? God loves us all. Therefore, let us walk together in love, and let us be reminded we never ever walk alone,” Nelson said.

“You can count on us as good partners,” said the Rev. Warren Lesane, Jr., who chairs the PMA Board.