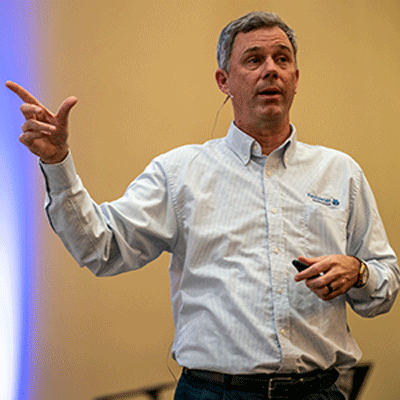 CINCINNATI — Talking about death is difficult. Yet planned giving, especially in congregational contexts, can clarify what’s important to us and how that can benefit others long after we’re gone.

Karl Mattison, Vice President of Planned Giving Resources for the Presbyterian Foundation, outlined how churches can get started in the “Planned Giving 101” workshop at Stewardship Kaleidoscope on Sept. 14 in Cincinnati.

Only 5% of estates have a provision for charitable giving, he said. Yet according to a survey, about 30% of people say they would be inclined to leave a planned gift. Most people update their wills as needs and priorities change.

“We all say, ‘Well, we don’t have any money,’” Mattison said, but we are all stewards of something — cars, retirement accounts, homes, furniture. “Every single one of us is going to be finished with it one day.”

Since planned giving is likely the largest transfer of assets we’ll ever make, where do we want those assets to go?

“When you’re doing your estate plans, you really discover what matters to you,” Mattison said. That includes making sure that what matters to us thrives after we’re no longer around.

He recalled that early in his tenure with the Foundation, he met with a donor who was dying. The woman, who had no children, had established charitable trusts for scholarships for children in her church. Now she had questions about how it would all work, and Mattison struggled to find the words.

“I was afraid to talk about this inevitable thing,” he said. “And she said: ‘Mr. Mattison, get to the point. What’s going to happen when I die?’”

That’s when he was able to explain the logistics, such as how many students she could send to school, and to actually use the words “when you die.”

And that’s when the woman looked out at her garden and smiled. “She did not hear me say ‘die,’” he recalled. “She heard me say: ‘You’re about to give the people you care about more than anything else in the world the opportunity of a lifetime.’ She felt this joy. That’s been the biggest lesson I’ve ever learned.”

That’s why he encourages donors and church leaders to make known the stories behind the gifts. The local church still has a competitive advantage over large nonprofits for charitable giving, Mattison said. The church is up close and personal. Potential givers meet within its walls (even the virtual ones) every week. Their best and worst moments — baptisms, weddings, funerals and countless other occasions — are marked there too. The church can be an anchor in a roiling world.

Mattison walked the audience through three phases of incorporating planned giving into the life of a church. First comes building a foundation by (of course) forming a committee to decide, for example, where gifts can go and whether a legacy society is right for the congregation.

Next come conversations with church leaders and longtime members, gathering stories and inviting potential founding members to join the legacy society, if there is one.

Then comes the rollout of communications, education, sermons and even a fun event to launch what may seem like a dreary topic. One church performed a hugely successful planned giving musical, Mattison said. “Can you imagine going to a planned giving event that is a blast?”

Get the message out

“One of four people would leave a planned gift,” Mattison said. “They just need it in their heads.”

Newsletter articles, announcements, bulletin blurbs and more are easy ways to do this.

That’s because examples of all of these, and many other helpful resources, can be accessed at the Foundation’s Stewardship Navigator site. It’s a free resource for all Presbyterian Church (U.S.A.) churches.