SEATTLE – From the outside it’s a very nondescript place—a small building surrounded by offices filled with Amazon, Microsoft and other high-tech workers.

The first thing people notice when walking into Union, a new worshiping community in Seattle’s Westlake district, is a community coffee house with “this sanctuary like space,” says Renee Notkin, who is co-pastor of Union along with her husband James.

One day a man walked into Union’s space and as he came through the café, seeing the sanctuary like ceiling where Union worships, he asked, “What is this space?”

“The person I was with said, ‘It’s a church!’” says James Notkin. “The man nodded his head saying, “I knew it. I was walking down the street and I was drawn this place, I knew this was a place of peace.”

The man proceeded to tell them his son was one of the children murdered at Sandy Hook. In the time since that tragic event he’s been drawn to places of peace.

“We do have a worshiping community on Sunday mornings,” says Renee Notkin, “but we also have this amazing space that is like a blank slate for the community to use.” 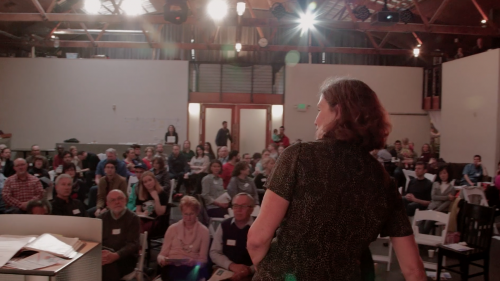 Renee Notkin in the space that Union uses for worship on Sundays, as space for the neighborhood to use during the week for things like non-profit events and business meetings, celebrations, and as women’s shelter. Photo screen shot from video by Mike Fitzer, Film 180

The sanctuary-like space that people see from the coffee house is converted on a daily basis for the community to use—be it for non-profit events, business meetings, or community celebrations.

Every Sunday as part of their final act of worship—after morning worship or Sunday evening Bible Study—they set up the space as women’s shelter for the city to use on Monday nights when they typically have more women who need a place to stay.

“This act of tearing down and setting up for worship has transferred into us becoming people who are serving together in all kinds of capacities,” says Renee Notkin. “Now we have the women’s shelter, we are starting to provide food for those who don’t have as much we have, we’re going out and cleaning up Lake Union, which is our neighborhood.”

Church administrator Loretta Mathison Pain was initially drawn to Union because she was intrigued by its mix of people who have been in church all their lives and those interested in spirituality.

“We have those, like myself, who had ‘pew fatigue,’” she says, “who wanted more out of their church experience, and those who actually haven’t made a faith choice yet.”

Coffee House regular Juan Sadder says he doesn’t really go to church anymore. But he loves getting his coffee and chocolate here. “It reminds me of a lot of the characteristics of the church I grew up in Brooklyn” he says. “The place is warm, welcoming, and there’s a strong fellowship among the people that attend Union, and those who know of it, and I respect how well they have integrated themselves in our community.”

“They really provide a very personal experience, as opposed to a purchased one.”