The church is responding to the Syria-Turkey earthquake, GIVE NOW!
Make A Donation Click Here >
Home › PEC Conference concludes with renewed call to end Doctrine of Discovery 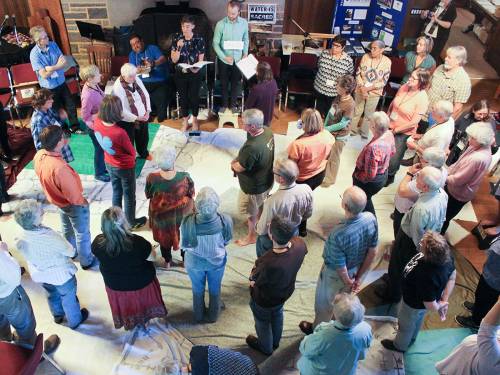 Nora Leccese with the Office of Public Witness, leads an activity during the PEC Conference. (Photo by Rick Jones)

CORBETT, Ore. – Attendees of the Presbyterians for Earth Care Conference have wrapped up a week of conversation and tears around the struggles of Native Americans and the continued environmental threat to the Columbia River Gorge along the Oregon/Washington state line.

The week included a sharing of meals and conversations with local tribes, a visit to local fishermen and fisherwomen and deep conversations about the Doctrine of Discovery. The doctrine allowed colonial powers to lay claim to lands belonging to foreign sovereign nations if inhabitants were not considered Christian.

“The Doctrine of Discovery is still being used to tell native people they don’t have the right to own property, govern or manage their resources the way it needs to be done,” said the Rev. Alan Buck, pastor of the Portland Native American Fellowship. “The doctrine jettisoned the white Christian man into leadership roles.”

Irv Porter, associate for Native American Intercultural and Congregational Support with the Presbyterian Mission Agency, led a panel discussion on the doctrine.

“The doctrine was used to weaken legitimacy and worth of international treaties between indigenous nations and countries that included the U.S., Canada, Australia and New Zealand,” said Porter. “What does a 500-year-old document have to do with me? It allows policies to develop without the knowledge and consent of indigenous people. Diminished protection of human rights is obvious.” 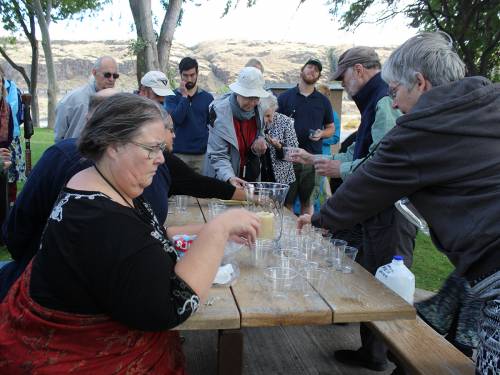 PEC participants prepare for a ‘Fire and Water’ ceremony on the Columbia River Banks at Sililo Park. (Photo by Rick Jones)

Panelist Ilarion (Larry) Merculieff, an Aluet from Pribilof Islands, told the group that people who are subject to the doctrine are still hurting today. Alcoholism, suicide, addictions and heart disease, he says, are all subtle forms of the Doctrine of Discovery.

“If the doctrine is repudiated at every level, beginning with church, if we apologize and take action to ensure the doctrine is expunged and rejected, it will help open people’s hearts, especially native people who are still facing the struggles of this action,” said Merculieff.

Nora Leccese, associate for Domestic Policy and Environmental Issues with the Office of Public Witness, led a group session.

“In tracing consequences of the Doctrine of Discovery- European explorers believed they had the God-given right to claim the land they found,” said Lecesse. “It undermines justice and equality among people in the world today. Indigenous leaders at the World Council of Churches are urging people to call for an end to the doctrine and join them in defending their rights.”

Leccese led attendees through an exercise, placing blankets across the floor and asking participants to stand on them.  Through out the exercise, people were asked to leave the floor, representing the deaths of Native Americans through war, disease and other issues.

For one attendee, the exercise re-affirmed what she had felt when the 222nd General Assembly met last year in Portland. Doreen Simmonds, a student at the University of Alaska in Fairbanks, says she was finally able to let go of the resentment she had. 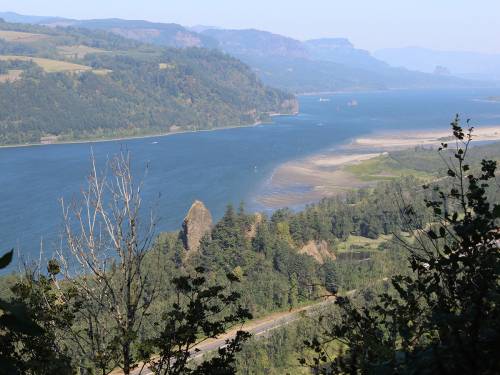 The Columbia River Gorge is a source of life for thousands of Native Amerians. (Photo by Rick Jones)

“I had so much resentment against the church for what it did to my people. I had felt white people were here to take money and take the land, but that changed when the General Assembly met here,” she said. “I grew up believing I was nothing, but I will throw away doubts about myself and gain confidence.  In my sobriety, I have stories to tell and today I will start telling stories, talk to my children, grandchildren that there is hope that we have pride in ourselves. Today, I have gained that pride.”

Attendees heard through out the week that climate change was impacting the water, raising the temperature and affecting fish. The Rev. Paul Galbreath, who led worship each evening, said the problem goes far beyond the Columbia River.

“We are not simply facing an ecological crisis, we are facing a spiritual crisis that cries out to us to re-connect with the water near our homes,” said Galbreath. “Water does not belong to the church. We use it but it is not ours. Water belongs to God’s good earth. The source of our healing comes from the most unlikely places, thanks for the rivers, streams and watersheds that are a source of life, healing and wholeness.”

Buck said if people do nothing, creation will seek to balance the environment without regard to property, finances or the future.

“This world house is the only one we have and we share the awesome responsibility that the home we have inherited will be enjoyed by generations to come,” he said. “In less than a blip of geologic time, we have contributed to the mass extinction of species and we are changing the very climate of this world house.”

The PEC Conference concludes Friday afternoon and a planning committee will begin looking at the next conference in 2019.