Protesters take to the streets in Medellín, Colombia. (Photo by Edwin Dávila)

LOUISVILLE — A multi-billion-dollar tax reform bill that would have increased taxes on basic necessities including food and utilities sent Colombians to the streets in late April to peacefully protest.

The government responded with excessive uses of force, causing dozens of deaths and hundreds of injuries. Many protesters have been arbitrarily detained. Some have completely disappeared.

With the nation already struggling from the latest wave of COVID-19 infections and the economic and social costs of the prolonged pandemic, President Iván Duque Márquez announced that a tax reform bill was needed to raise funds to pay off some of the nation’s debt and stabilize its credit rating.

“Although Duque has withdrawn the tax plan, people continue to protest the government’s failure to implement the peace accords or address the killing of community human rights leaders, and its general disregard for the needs and well-being of average Colombians,” according to World Mission’s the Rev. Sarah Henken, who serves as peace initiative promoter with the Presbyterian Church of Colombia (PCC).

“They are now also protesting the violent repression,” Henken said. “The world is rightly outraged at the brutal repression unleashed by the Colombian government on its citizens as they exercise their right to protest. Presbyterians in the United States and around the world are asked to join with our partners” in the PCC “to speak out as people of faith to renounce the violence of the Colombian state, urge meaningful dialogue and negotiations with concerned sectors of society and defend the sacredness of life.” 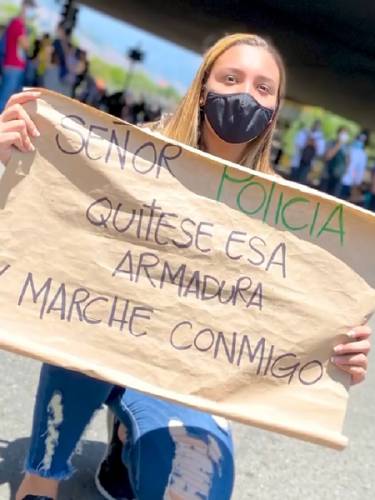 A protester in Medellín holds a sign that says, “Mr. Policeman, take off your armor and march with me.” (Photo by Edwin Dávila)

According to leadership, the PCC stands with people who are protesting. General Secretary the Rev. Diego Higuita says, “Through its various bodies — the Reformed University, presbyteries, and ministries — the Presbyterian Church of Colombia expresses its solidarity with the Colombian people, insisting on the recognition of our fundamental rights and joining in the search for justice and equity. While we pray and clamor for peace, we join with other churches and ecumenical organizations in calling on the Colombian government to immediately cease the use of excessive force against the civilian population and establish channels of dialogue and consensus to deal appropriately and coherently with the crisis facing our people.”

IPC asks the national government to fully implement the final peace accord and promote an inclusive social dialogue with the participation of all sectors of society and the mediation of the churches and other communities of faith to make decisions favoring fullness of life for all the people of Colombia.

In a statement issued May 8, the Presbyterian Church of Colombia’s Peace Commission wrote, “We will not grow weary of praying for our country and accompanying our brother Jesus in contributing to the construction of peace with actions that promote life. We invite each member of our church to work in their daily life for this purpose so that our dream of peace might be realized. Only with the country at peace, with justice and without violence, can we build a better Colombia for our children.” 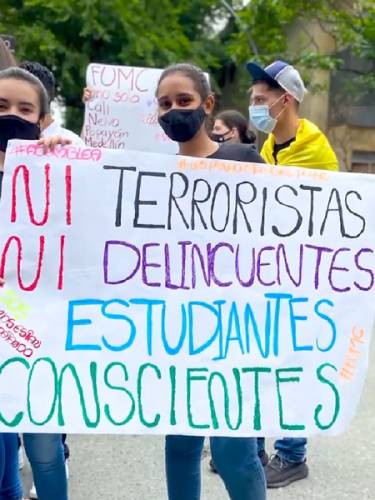 A protest sign in Medellín reads, “Neither terrorists nor delinquents, students with awareness.” (Photo by Edwin Dávila)

The Peace Commission was created to contribute from a faith perspective to the promotion of peace as the inalienable right of the Colombian people, as enshrined in the nation’s constitution.

“We deeply lament the reality the nation is experiencing, moments of anguish, the people shouting in the streets over the injustices of an economic system which has impoverished half the population,” the Peace Commission said in the statement. “The pandemic has profoundly affected each facet of our life, from health and psycho-emotional stability to the economy. In spite of this critical situation, the government pushes reforms which at the political, social and economic level would affect a population ever more impoverished.”

The Washington Office on Latin America (WOLA), an advocacy group, has received reports of grossly excessive use of police force in several Colombian cities. Cali is the most severely impacted, but incidents are also reported in Barranquilla, Bogotá, Bucaramanga, Manizales and elsewhere. WOLA reports the use of force against participants in national protests is not new. Similar abuses took place on a smaller scale in November 2019 and September 2020.

In a statement, WOLA wrote:

”As the crackdown on social protest escalates, it is chilling to watch the commander of Colombia’s army, Gen. Eduardo Zapateiro, record a video (alongside the Defense Minister defiantly calling the riot police (Escuadrón Móvil Antidisturbios,  ESMAD) “heroes dressed in black” and urging them to stay their current course against their fellow Colombians. (Gen. Zapateiro does not command the ESMAD.)” 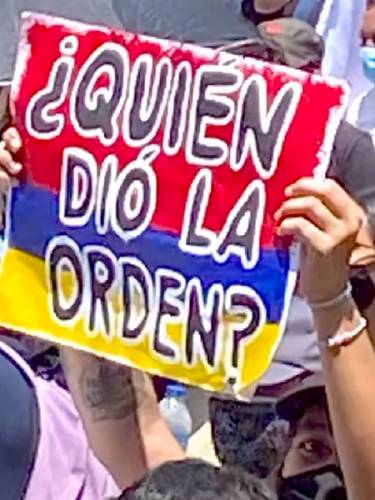 A protester in Medellín holds a sign asking, “Who gave the order?” (Photo by Edwin Dávila)

Growing international voices are urging the Colombian government to de-escalate tensions, stop the violence, and encourage dialogue with a representative group of protesters. Groups denouncing the brutal and illegal use of force by Colombia’s National Police and riot police (ESMAD) include the United Nations High Commissioner for Human Rights, the Inter-American Commission on Human Rights, the Organization of American States, the European Union and hundreds of Colombian and international human rights organizations.

Many believe the United States has more leverage than any other country and that messages to elected officials in Washington, D.C., can tip the balance toward urging moderation.

Manifestations of solidarity has been coming from within the region and from various ecumenical bodies related to Colombia,” said the Rev. Dr.  Valdir França, World Mission’s coordinator for Latin America and the Caribbean. “AIPRAL (the Alliance of Reformed Churches of Latin America) has called an ‘International Vigil of Prayer and Solidarity with Colombia,’ where we heard our Colombian siblings sharing their testimonies of the latest events,  where the youth had a preponderant role in the manifestations  and the response of the international community expressing their solidarity and prayers. There are plans to discuss further ways to examine opportunities for actions, expressions of solidarity and advocacy towards the critical moment Colombia is facing right now.”

The Rev. Dr. J. Herbert Nelson, II, Stated Clerk of the General Assembly of the Presbyterian Church (U.S.A.); the Office of Public Witness; and Presbyterian World Mission plan to issue a statement of support and a call to prayer in the next few days.