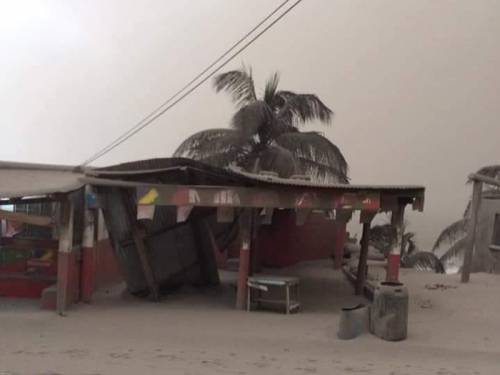 Ashfall in St. Vincent and the Grenadines April 10, mainly on the North Windward side of the island. (Photo courtesy of the Caribbean Disaster Emergency Management Agency)

LEXINGTON, Kentucky — Presbyterian Disaster Assistance (PDA) is responding to volcano eruptions on the Caribbean island of St. Vincent that the United Nations says could create a humanitarian crisis.

The situation began to unfold Friday with the first eruption of the Soufriére volcano on the northern end of the island that is part of the Windward Islands of the Lesser Antilles in the eastern Caribbean Sea. According to The Associated Press, 16,000 to 20,000 people were evacuated with 6,000 of those people reportedly among the most vulnerable population.

“So we are facing a situation with a great deal of uncertainty, and also a humanitarian crisis that is growing and may continue for weeks and months,” Didier Trebucq, United Nations resident coordinator for Barbados and the Eastern Caribbean, said to the AP.

Click here to contribute to PDA’s response to the St. Vincent volcano eruption

As the situation continues to evolve, with new eruptions and explosions this week, Presbyterian News Service asked the Rev. Edwin González-Castillo, PDA Associate for Disaster Response–Latin America and the Caribbean, for an update on St. Vincent.

Who are our partners in St. Vincent, and what are we hearing from them in terms of damage, casualties and the overall situation?

At this moment the potential partner is the St. Vincent and Grenadine Christian Council of Churches. We have been in contact with the chairperson of the Council, Rev. Adolf Davis. The situation in St. Vincent is extremely delicate. Even though communities are not potentially in direct threat from possible lava or pyroclastic flow (masses of extremely hot ash, lava, and gases that can move more than 120 miles per hour) of the Soufriére volcano, right now the biggest effect has been the contamination of the bodies of water. The amount of ash produced by volcanic explosions has contaminated rivers, which are the supplement of most drinking water. Similarly, agriculture and livestock from families who depend on it have been severely affected by ash. In talks with Rev. Davis, we were told that even though one of the imminent needs at the moment is clean water, even greater needs must arise in the medium and long term. These include access to food security. 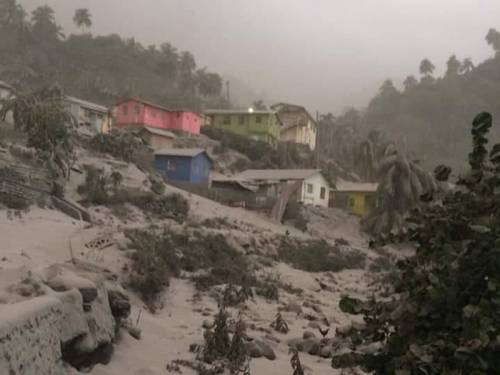 More than 16,000 people have been evacuated from the northern portion of St. Vincent, an island in the Caribbean. (Photo courtesy of the Caribbean Disaster Emergency Management Agency)

At the moment more than 16,000 people have been evacuated from the northern region of the island, where the volcano is located, with more than 3,000 people located in more than 80 government shelters. So far there has been no reported death from the volcano.

A volcanic eruption is not as common as some other disasters PDA deals with. What are some specific concerns you have with the impact of a volcano?

While not as continuous as other disasters, PDA has responded to other volcano disasters in the past. The most recent was in February of last year for Taal Volcano in the Philippines. One of the biggest challenges presented by a volcano is the possibility that it will continue to have explosions and/or eruptions for an extended period of time. Unlike atmospheric events that directly affect a specific period, volcanoes, like earthquakes, are unpredictable and can last for long periods. In addition, the effects of a volcano can extend beyond the regions near the volcano. An example of this is the fact that the ashes of this volcano have already begun to wreak havoc in neighboring countries that have been receiving the ashes.

Is PDA responding financially or in any other way at this point?

At this time PDA’s plan is to provide a solidarity grant to meet immediate needs. We look forward to continuing to support them through donations we hope to receive to meet medium- and long-term needs.