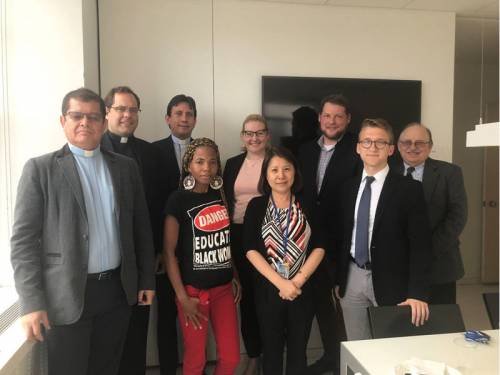 LOUISVILLE — As hopes for peace fade and a humanitarian crisis grows in Colombia, an ecumenical group representing churches and ecclesial organizations in the Latin  American country came to the United Nations last month in a visit facilitated by several groups including the Presbyterian Ministry at the United Nations (PMUN).

A peace agreement signed in 2016 seemed to promise an end to violence and oppression in the country. The agreement earned then-President Juan Manuel Santos a Nobel Peace Prize. But under new President Iván Duque Márquez, who took office last August, leaders of the group say that peace is now in a precarious position.

In a statement preceding its visit, the group known as DiPaz said, “We are a group of people, churches and ecclesial organizations who currently worry about the actions of President Iván Duque Márquez before the Colombian Congress, and about his objections to the Statutory Law for the Special Jurisdiction for Peace (JEP). This law had already been subject to control by the Constitutional Court, and it required presidential approval. President Duque’s actions do not only ignore due process to pass a bill of law and the powers of the JEP, but they also disregard the high court and the rulings it made in 2018, which the president regards as inconvenient.”

“Our message to the international community is to affirm their support and implementation of the peace accord from the Colombian government, to renew dialogue … and to protect the social leaders who are working for peace,” the Rev. Milton Mejia of the Presbyterian Church of Colombia said during an interview in the World Council of Churches offices.

“It was a great opportunity for the Presbyterian Ministry at the United Nations to partner with the World Council of Churches in hosting a delegation from DiPaz in Colombia,” wrote Ryan Smith, director of PMUN and the PC(USA) representative to the United Nations. “One of the goals of the Presbyterian Ministry at the UN is being a connecting point for international partners within the United Nations community. We continue to pray for a just and lasting peace in Colombia and continue to work for that peace within the UN system.”

The Rev. Douglas Leonard, executive of the Ecumenical United Nations Office and World Council of Churches representative to the United Nations, wrote, “The body of Christ is intimately and globally connected.  It transcends boundaries.  I think about the apostle Paul’s insight in 1 Corinthians 12:26, ‘If one member suffers, all suffer together with it.’

“As Christians, our concern for human suffering crosses boundaries.  We are deeply concerned about the way in which the peace accords in Colombia are under threat of being undermined.”

DiPaz advocates resumption of peace talks with all parties involved.

The group of three Colombian representatives was Mejia, Bishop Atahualpa Hernandez of the Lutheran Church in Colombia and Nadiria Ruiz Medina, a human rights worker who has received death threats and lost family to the conflict.

In their interview after a few days at the U.N., the delegates described human rights violations including the murder of social leaders and humanitarian workers in the country, all of which has contributed to an atmosphere of fear.

“We have been particularly concerned with conservation of our territory, particularly plant life we need in order to survive,” Ruiz said. “The message I bring as a social leader and a woman is that Colombia move beyond war and live in peace.”

It’s a message the DiPaz delegates believe was being heard during their UN visit.

“We have a lot of hope now that the Security Council affirmed their part of the process,” Mejia said. And referring to their hosts, he added, “It gives us a lot of hope all you have done to organize this visit for us and that these churches can see a role in accompanying us and work with us to realize peace in Colombia.”