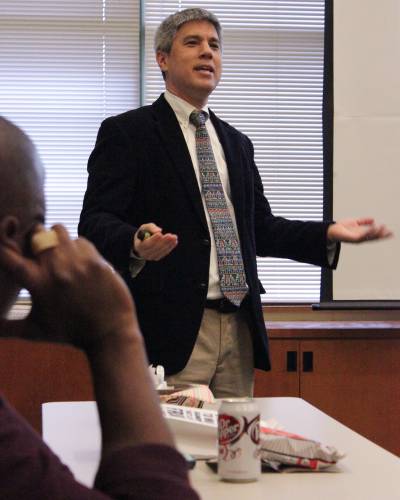 Dr. Perry Chang, research associate with Presbyterian Research Services, reported on the findings of two surveys on race during a brown bag luncheon Monday at the Presbyterian Center. (Photo by Rich Copley)

LOUISVILLE — While about 85 percent of the congregations within the Presbyterian Church (U.S.A.) are predominately white, more than half of Presbyterians recently surveyed said they’re not opposed to worshiping in a congregation where most of the members aren’t of the same racial and ethnic background as they are.

Research Services’ Dr. Perry Chang told a brown bag lunch gathering at the Presbyterian Center Monday that findings from two surveys — the 2017 Presbyterian Panel and the Clerk’s 2018 Annual Questionnaire on Intercultural Ministries — indicate that respondents who said they prefer a same-race worshiping community were more non-Democratic and more theologically conservative than those who didn’t indicate that preference. In general, those preferring same-race worship said they felt more comfortable worshiping that way and feared losing their faith traditions worshiping among a more diverse community.

Asked about their efforts at diversifying the congregation they serve, the largest number of local church leaders said their community is all-white or that their church has done nothing to promote diversification.

Forty-five percent of those surveyed for the 2013 Presbyterian Panel said they preferred worshiping in a congregation where most members are the same racial and ethnic background as they are. By 2017, that number had dropped to 36 percent.

In addition to political party membership and theological orientation, a third factor – having attained a college degree – made respondents about three times more likely to be willing to be part of a multiracial or multi ethnic worshiping community.

Those who said they prefer a same-race worshiping community framed their preference around two main reasons – their comfort level (22 percent) and the value they associate with shared faith traditions (15 percent). Another 7 percent said that homogeneity “works better.” 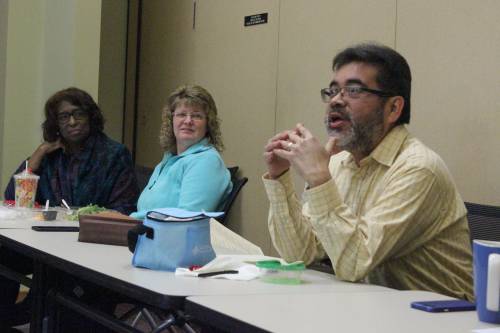 A brown bag discussion on “Birds of a Feather? Why Presbyterians Would or Would Not Prefer to be Part of a Same-Race Worshiping Community” drew about 15 attendees Monday, including the Rev. Lemuel García–Arroyo, associate director of Racial Equity & Women’s Intercultural Ministries. (Photo by Rich Copley)

Individual responses included these comments: “Presbyterians, including myself, typically prefer services ‘decently and in order’; many of my racial/ethnic background and most of those of other racial backgrounds prefer a more repetitive, less orderly, louder style of worship/music (that gives me a headache). I do not find pain conducive to worship … I think it is natural to prefer to associate with those with whom you share most in common (and that includes associating with Christians of whatever race/ethnicity over non-Christians).”

Or this one: “Your question presupposes that YOU have the right answer and I don’t. Are you just looking for the politically correct response, or do you actually care what partitioners (sic) think? Be careful how you force this issue … I have enjoyed participating in Spanish language and Korean-American services and in MANY different religious services (Jewish, Mormon and most Christian denominations). BUT I am most comfortable worshiping in my local Presbyterian Church where I have been a member for 37 years — white skin and gray hair and all — just like PC(USA) in general. Try to force a change and we’ll be an even smaller church … and just as white and old.”

Here’s another response: “The more we are with people of different races and culture, the better we can break down those differences and find we are more alike than different. Our lives become more enriched by diversity of ideas.”

Then there’s this answer: “Race doesn’t enter into my thought process. I don’t prefer it one way or the other. I would not seek racial diversity but would not avoid it either. My focus would be on hearing the Word, not the racial makeup of the congregation.”