Make A Donation Click Here >
Home › PC(USA) software engineer asks ‘What if God was our customer?’ 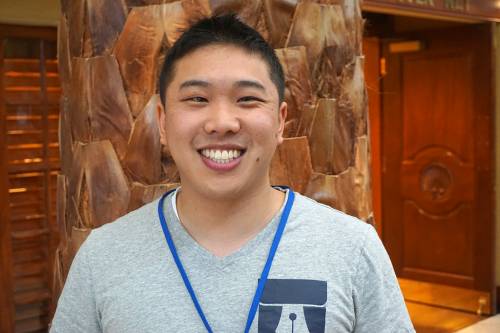 Chris Lim at the Go Disciple Live “Be the Light” Evangelism Conference. (Photo by Mari Graham)

ST. PETE BEACH, FLORIDA – After earning both bachelor’s and master’s degrees in computer science from the University of Washington and then landing a plum job at Amazon less than a year later, what more could a young software engineer want?

Lim, a ruling elder at the Indonesian Presbyterian Church in Seattle, wanted nothing less than what God wants—that God’s kingdom come. And, what’s more, he wanted to use his God-given gifts, specifically his expertise in technology, to hasten its coming.

To that end, Lim formed a community of Christians at Amazon—numbering from 5 to 20 of his fellow employees, with others contributing by email—to discuss the theology of technology. “Because we are not only consumers of technology, but we also create it,” said Lim, “that means we have the opportunity to infuse it with the values of the Kingdom as we go about doing that.”

The group started off its meetings studying a book, From the Garden to the City: The Redeeming and Corrupting Power of Technology, by John Dyer, which Lim called “a primer into the theology of technology.” Eventually they undertook a series called, “Succeeding at Amazon as a Christian,” which compared Amazon’s 14 leadership principles with Scripture. “We wanted to see if conforming to Amazon’s image of leadership meant conforming to Christ and vice versa,” explained Lim.

But it was Amazon’s number one leadership principle, “Customer Obsession,” that proved especially transformational for Lim. “What it means is that leaders begin with the customer and work backwards,” he said. “They pay attention to the competition, but they obsess over customers, and that is practiced in various ways throughout the company.”

Lim said that all Amazon employees are asked to write a fictitious press release ahead of time, before they do any work on a product or initiative, in order to test it to see if the kinds of things they are saying align with what Amazon’s customers should be excited about.

The discussion group then began to test the “Customer Obsession” principle against Scripture, asking themselves such questions as, “Is this a manifestation of loving your neighbor as yourself,” and “What are the limits of customer obsession?”

“At the end of the day, the question that I posed to our group,” said Lim, “was, ‘What if God was our customer?’ What if we took that seriously? What if we were to obsess over what He values, what He desires, and then we work backwards from that to invent things that deliver what He desires in the world.”

What began for Lim as merely an enlightening small group discussion led, a few short months later in May of 2013, to what he could only describe as “a divine tap on the shoulder.”

“The Lord was telling me, ‘Chris, actually I want you to leave your job, devote your attention to the purpose I called you to, and trust me to provide for you,” he recalled. “That purpose being to actually create a company that would make God its customer, take it seriously, and obsess over what He wants and invent technology that would deliver that.”

Like many prophets before him, Lim questioned whether his call was from God. “Am I just burned out from Amazon, or what,” he wondered.

So before deciding to quit his comfortable job at Amazon, Lim first tested the spirits while on retreat with his family at Cannon Beach in Oregon.

When Lim left Amazon in October 2013 after three and a half years, he founded TheoTech in November, where his younger sister Natasha Lim—also a former Amazon employee—is his business partner in the fully self-funded venture.

Among the first products to be introduced by TheoTech was Ceaseless, an app that Lim designed to help people experience the joy of prayer. The app first appeared in the App Store on May 8, 2015, with the Android version debuting in the Play Store on April 5, 2016.

Lim said that he first built Ceaseless as a Facebook app, because he found himself in a time of his life when his prayers were “so selfish.”

“I knew that the Lord wanted us to pray for others, so I said why don’t I just use my Facebook friends list to become my prayer list,” he said. “I built an app that sent an email to myself every morning with three to five of those friends to pray for on that day.”

After he had built the app, Lim invited some of his friends to try it out as well. Eventually he had 70 friends engaged in the daily prayer practice with him, getting the names of five Facebook friends in the morning and then praying for those people that day.

“Can you guess how many people we prayed for after 6 months,” Lim asked excitedly. “I was blown away—we prayed for over 20,000 people. Seventy of us! At this [Go Disciple Live evangelism] conference, even church planters with a small congregation can have an immense impact if you look at the relationships they have with their community, their city.”

What began as an app to help Lim pray for his friends soon grew into something more far-reaching.

“There’s something here that we can do that’s not really been done before,” Lim said. “I did the math, and with those assumptions, it would take about one percdnt of the world praying for three friends every day—70 million Christians doing this— to pray for everyone on earth. Only one percent of the world!”

One new subscriber Lim recently gained toward achieving his ambitious vision for Ceaseless was the Rev. Charles B. “Chip” Hardwick, director of the Theology, Formation, and Evangelism ministry area for the Presbyterian Mission Agency. After the two met at the Go Disciple Live “Be the Light” Evangelism Conference last week, Hardwick talked about his first experience using the daily prayer app in a recent blog post.

“So far I’ve prayed for my dad, my best friend from business school, my assistant and tech director of the church I served in in Illinois, and one of my dearest friends in Charlotte, and given thanks for my favorite aunt and a ministry colleague (both of whom have passed away),” wrote Hardwick. “The reminder and its randomness makes praying a joy.”

The free app is simple to download for IOS or Android. Lim explained that whenever a new user downloads the app, it will install and ask for two permissions—one for the user’s contacts and the second to receive notifications—in order to protect the user’s privacy.

“Say yes to both,” Lim advised. “For your contacts, we don’t actually share them with anybody—they don’t even go into our system. It’s just so that we can show your contacts to you to pray for them.”

Lim said that when he looks at Scripture, he remembers that the apostle Paul urges believers to pray for all people because “God wants all people to be saved, and He wanted believers to live that out through praying for others.”

“What’s unique about the app is that the tech makes it easy for prayer to become a habit,” said Lim. “Since our memory may not always be that great, if friends’ names just come up, we can pray for them, we can reach out to them, and in so doing—just by praying for our relationships—we’re able together as a body to pray for everyone on earth. That is the vision for Ceaseless, personal prayer for everyone on earth. The vision really is we want God’s kingdom to come.”

The Go Disciple Live “Be the Light” Conference, formerly known as the Evangelism and Church Growth Conference, held August 8-11, was a vibrant gathering of some 275 Presbyterians committed to disciple-making which leads to authentic evangelism, effective church transformation, justice, and church planting through 1001 new worshiping communities.

For information on the 2017 Disciple-Making Church Conference, to be held January 16-19, 2017, at the TradeWinds Island Grand Resort, St. Petersburg Beach, email Eva Slayton or Ray Jones.