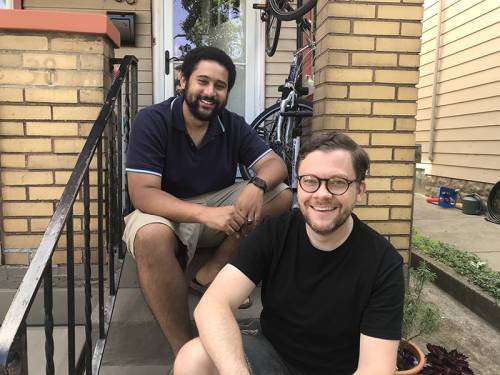 Through their antiracism work, the Revs. Gavin Walton (above) and Michael Holohan’s collegial relationship has developed into a deep friendship. (Photo by Marianne Holohan)

LOUISVILLE — The Revs. Gavin Walton, 29, and Michael Holohan, 40, believe it’s important for the Presbyterian Church (U.S.A.) to do more than just talk about racism. They say it’s time for the Church to take action against racial injustice, which from their view is long overdue.

While acknowledging that Presbyterians can always find another book to read, and that there’s value in that, they don’t want the antiracist collective that they started a year ago to “get stuck in that.”

Walton and Holohan are PC(USA) ministers in the Oakland neighborhood of Pittsburgh, which is the academic and health care center of the city. Walton, who has a white mother and Black father, pastors Grace Memorial Presbyterian Church, a 150-year-old historically Black congregation. Holohan leads Commonwealth of Oakland, a new worshiping community he started in Grace’s neighborhood primarily to bring students and people experiencing homelessness together. Three years later, Commonwealth is young and white, with a significant LGBTQIA+ population that worships together monthly after a free meal. They also have weekly Bible studies and a monthly justice roundtable group. 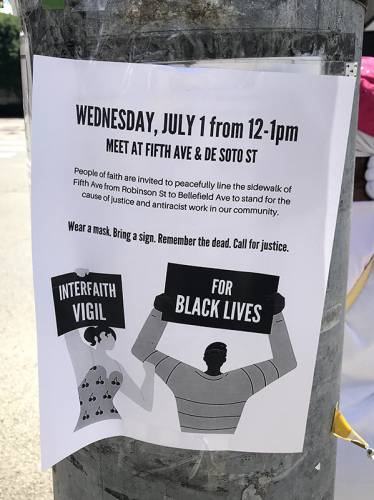 More than 250 people from 30 organizations participated in an interfaith vigil that the Revs. Gavin Walton and Michael Holohan organized a year ago. (Photo by Michael Holohan)

Nearly a year ago, in early July, the two organized an antiracist vigil in the wake of the George Floyd murder. More than 250 people, representing 30 organizations, turned out. After the demonstration, they wanted to continue to work for racial justice and equality.

“The point is, this is an ongoing thing,” Walton said. “You can’t just go out and demonstrate once. Michael and I really took that to heart.”

The two began to work with others religious leaders in Oakland and started planning another vigil in the fall. As the months went by, they discovered there was a craving for a clergy stakeholder group that could meet monthly to share ideas and support each other in their antiracist work.

Now at monthly gatherings, around 15 people come alongside and support each other. Because most of them are white, they encourage each other to think about people of color in their social networks that might be open to building relationships of trust with them. They also invite various perspectives that are missing in the group to come and share with them about the antiracism work they’re doing in the city.

Recently, Holohan was invited to speak at a Moral Monday event for the Poor People’s Campaign in Pittsburgh about the basics of poverty and how “God is on the side of the poor.”

He spoke of how his Christian tradition had something to say about bosses stealing the wages of their workers, about lenders that prey on the vulnerable, and about ignoring the needs of people because of race, ethnicity and culture. And he quoted from Mary, the mother of Jesus, in Luke 1:53, that, “God fills the hungry with good things and sends the rich away empty.” 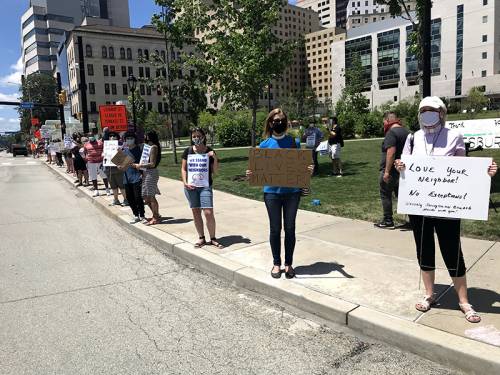 People lined the streets at an interfaith vigil for Black lives in Pittsburgh, which Commonwealth of Oakland co-sponsored. (Photo by Michael Holohan)

Afterward, a demonstrator, who had been raised in the church, came up to him crying. She had never heard this before and was grateful to hear the connections between the Bible, poverty and race in the real world.

“People are disconnecting from churches who don’t apply the wisdom of Scripture and their traditions to systemic problems like racism and poverty,” Holohan said. “A lot of the people on the streets demanding change feel the connection between their activism and faith. But many aren’t part of a religious community. I think that says more about our faith communities than it does about the faith of activists.”

According to Walton, this conflict is reminiscent of Jesus and the Pharisees and the stories that the Reformed tradition has morphed into being disputes exclusively about grace versus the law.

“But they are also stories about people failing to live according to the will of God,” he said. “The religious elites of the day forsook the values of justice, mercy and love for their own security and convenience.”

As Walton sees it, Jesus spent a lot of time urging them to reclaim their calling, warning them that the Kingdom would be given to outsiders, like the poor, the sinners and the Gentiles. He firmly believes we are in such a moment now. 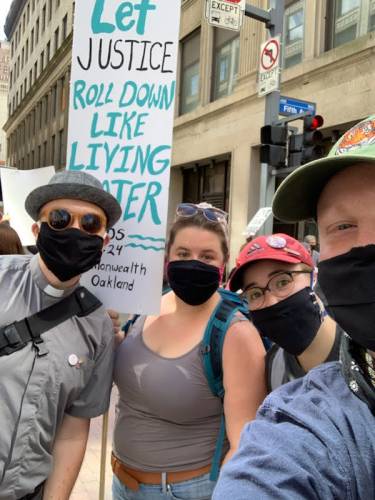 Members of Commonwealth of Oakland march at a Black Lives Matter protest after the murder of George Floyd. (Photo by Erin McGann)

“The mainline American church has functioned largely as a chaplain to the empire, while many secular and ‘unchurched’ people are unconsciously witnessing to the Kingdom of God,” he said. “We need to listen, repent and join the movement of the Spirit.”

So, together, Walton and Holohan are making a concerted effort to build a coalition of people willing to act to change the system. Since starting their antiracism work, their relationship has shifted from one of collegiality to deep friendship. With the uncertainty in the world that manifests itself in pastors around financial issues, Holohan says, it would have been easy for Walton to view his new congregation as a threat, making it harder for his traditional congregation, Grace Memorial, to thrive.

“Gavin encourages us and offers expertise and wisdom,” Holohan said. “It says a lot about him and his congregation, who have been supportive not only of us, but other new worshiping communities as well.”

Walton, who was raised in white schools and went to white colleges, says one of the things he respects most about Holohan is his humility.

“Mike has a lot of knowledge of how things work in both the systemic and interpersonal level, but he listens before he speaks,” he said. “Too often, white brothers either speak but don’t listen, or listen but don’t speak.”