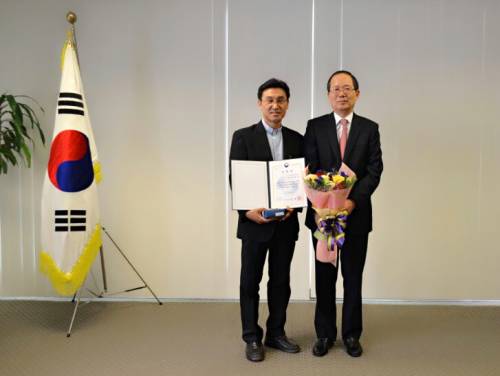 LOUISVILLE – For the past seven years, the Rev. Byeongho Choi, pastor of the Bethany Presbyterian Church in Marietta, Georgia, has served as the board chairperson for the Asian American Resource Center in Atlanta. However, Choi’s efforts in the Korean community of Atlanta go back much further.

For more than 20 years, he has invited Korean adoptee families to his church to educate them in Korean language and culture. Since 2002, as a board member and later as the board chairperson of the Asian American Resource Center, Choi led the agency in helping Korean immigrants with improving their proficiency in English and subsidizing apartment rents.

Under Choi’s leadership the center has helped hundreds of Asian Americans in the Atlanta area who have fallen on hard times. Through fund raising efforts from the Bethany congregation and the Asian community at large, Choi and the Asian American Resource Center offer such life impacting services as free housing for single moms with children for one year; teaching English as a second language; job training, helping refugees, especially North Korean refugees get settled in the U.S.; and assisting those in need of food and financial aid.

Choi’s efforts have not gone unnoticed. This past November, the Korean pastor received The Foreign Minister’s Award from the Korean government for his outstanding service in the Korean community of Atlanta.

In 2001, the Korean government legislated October 5th as the World Korean Day. Since then, Koreans and Korean immigrants from around the world celebrate this day to foster better relationships and to share Korean culture and identity. Recognizing individuals and organizations for their outstanding service and advocacy for the rights and welfare of the Korean community has been a part of the annual celebration since the beginning.

Last year was the 10th anniversary of the celebration. Any Korean or an individual of Korean descent can recommend an individual or an organization for The Foreign Minister’s Award. Choi was recommended by the KAAGA and was one of only 40 candidates from around the world selected by the Korean government to receive the award. 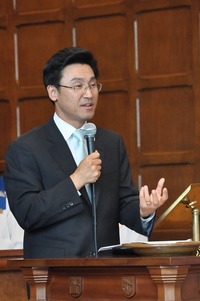 Choi was born and raised in a Korean Presbyterian family and trained in Presbyterian mission schools and at the Presbyterian seminary established by PC(USA) missionaries. He graduated merchant marine college and worked as a merchant vessel navigations officer. Choi established “ship church” and led worship services and Bible studies for sailors on every vessel he staffed for four years. He also founded the Korean Seamen’s Mission organization in Busan, Korea and devoted himself to serving sailors.

Choi received a Masters of Divinity from San Francisco Theological Seminary and a Masters of Theology concentrating on cross-cultural education from Princeton Seminary.

Since his ordination in the Presbytery of San Francisco, he served Korean American churches for three years as an associate pastor and 21 years as a senior pastor. Not only has Choi actively engaged in the Korean community, he’s passionate about multi-cultural ministry—opening his church for other racial ethnic groups. He now hosts and supports English and Spanish speaking congregations as well as Portuguese and Asian American second-generation congregations.