Being faithful in a polarized context 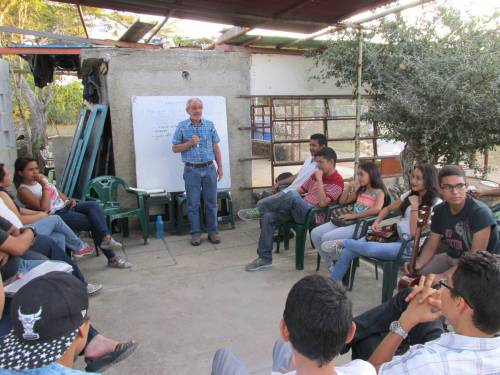 “Why do you go to church?” we asked.
“Because we believe in God,” said one.
“To hear the Word,” offered another.
“To learn to love one another.”
“To build a better world.”

So began a time of conversation with youth and young adults from the two Presbyterian churches of Barquisimeto, Venezuela, who had gathered in the late afternoon light one Saturday in September at Comunidad Presbiteriana Jesús de Nazareth, just outside of town.

Jesús de Nazareth’s simple meeting space is built on land donated by the community, on a street named after the church. So far it includes a bathroom, storage room, and open-air worship space, all constructed with recycled and donated materials. The emphasis of this new Presbyterian worshiping community is on love, service, and sustainability, offering, in addition to worship and Christian education, tutoring for the children and classes for the adults on how to use available ingredients to make healthy foods.

Historical context
The Presbyterian witness in Venezuela started at the Colegio Americano of Caracas, which was founded in 1896. That educational ministry continues strong today, and the Presbyterian Church of Venezuela (known as the IPV after its Spanish-language initials) is at work and prayer in two presbyteries that span from Maracaibo, Mérida, and Barquisimeto in the west to Caracas and surrounding towns in the center of the country. On this visit, we were blessed by time in worship, prayer, and conversation with pastors, teachers, doctors, farmers, musicians, and students at a dozen churches, schools, and community centers where the IPV engages in ministry. This small but faithful church bears witness to the abiding love of Christ in a time of profound polarization and division in society.

For generations, two political parties that represented only the interests of the nation’s economic elite governed Venezuela. The petroleum industry generated tremendous wealth for the dominant families, and funded public works and certain social services. Government corruption and abuse of authority were well known, and the gap between rich and poor was persistent and deep.

When Hugo Chávez won the presidential election in 1998, he used his strong congressional majority to convene a constitutional convention. The resulting constitution institutionalized the socialist “Bolivarian revolution” and guaranteed long-denied basic services for the impoverished majority. This attention to the needs of most Venezuelans helped Chávez’s PSUV party to consolidate its political power. The government embarked on campaigns to provide broad access to housing, education, healthcare and computer technology. Controversial measures included nationalization of the oil industry, drastic currency controls, and government subsidies of basic consumer products and gasoline. Sadly, the Chávez government proved just as susceptible as its rivals to the scourge of corruption.

Since Chávez was first elected, the country’s economic and traditional political elites, with support from the United States, have waged a relentless struggle against the socialist government. The opposition has organized several coup attempts, and some of its leaders have been charged with inciting violence and other crimes. The government, on the other hand, is accused of censorship and political persecution of the opposition. To date, although the PSUV has suffered both gains and losses in local, state and congressional elections, it has maintained control of the presidency.

Since the death of Hugo Chávez in 2013 and the subsequent election of Nicolás Maduro, who Chávez endorsed, Venezuela’s political opposition has organized a constant stream of demonstrations and media campaigns seeking to oust Maduro from the presidency. After winning a congressional majority in the 2016 elections, the opposition coalition quickly moved to organize a campaign to recall the President. This has spawned bitter disagreements between the opposition and the government authorities charged with interpreting and implementing a recall.

The deteriorating economy has spurred increased popular dissatisfaction with the Maduro government. The sharp drop in global oil prices has reduced the government’s capacity to provide subsidized goods and services for the population. Shortages of consumer staples ranging from milk and flour to disposable diapers and numerous medications have created stress and discontent for many Venezuelans. Long lines form where a shipment of such products is expected, and many Venezuelans have turned to speculation, purchasing subsidized products for resale at greatly inflated prices (a phenomenon known locally as “bachaqueo”).

The private sector is also accused of provoking opposition to the government by withholding products from the marketplace, and speculators smuggle subsidized goods across the border to Colombia where they are sold for much higher prices. Faced with rapidly increasing inflation, the government has repeatedly increased the minimum wage leading many businesses to lay off employees because they are unable to keep up with rising costs. Good jobs are hard to find, and many people, especially young adults, have left the country hoping to find better opportunities in the United States, neighboring Colombia, or elsewhere.

In this troubling context, a new appreciation for gardening, local farming and nutrition is spreading across the nation. Government agencies promote food sovereignty initiatives and provide new recipes and cooking tips that make use of vegetables and other ingredients that are readily available for purchase or can be grown in home gardens. In a country that had grown accustomed to cheap fast food and snacks, this dietary shift has been a major disruption in urban Venezuelan homes. Many embrace the positive changes it brings, including greater connections to farmers and local foods, lower fat consumption, and weight loss. Others, however, are resentful of the positive spin placed on change required by scarcity; nobody wants to feel like a healthy diet is being imposed by the government. 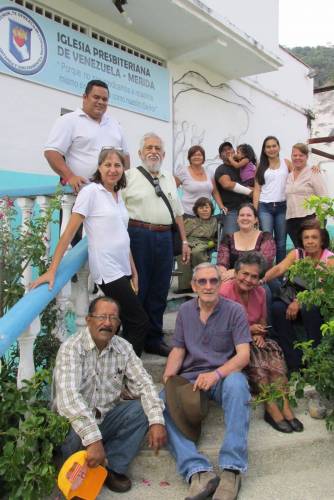 Off the beaten path
In rural communities, those farmers that are still in touch with indigenous crops and ancient traditions find themselves in possession of a specialized set of knowledge and skills that has increased their status in Venezuelan society. We were blessed to spend two days with Congregación Getsemaní in San José de Onova, a four-hour drive east of Caracas. Our host, Rafael Rojas, introduced us to the land that his family has been farming for three generations. He welcomed us to the homestead he shares with five of his children and their families, and we were invited to help out with some of the daily chores involved in keeping us all fed. We took turns milling the fresh corn used to make cachapa pancakes, and then later plucking dried kernels from their cobs, which were then soaked overnight and ground to make arepas, another form of staple cornbread. All this corn came directly from the land around us, the product of the daily labor of Rafael and his children.

In a typical show of Latin American hospitality, Rafael, his family and neighbors took in not only the two of us visiting from the PC(USA), but also the moderator and executive secretary of Venezuela’s Central Presbytery, Catalina Charris and María Jiménez de Ramírez. While a television chattered away in a corner, the shaded patio became the space for story telling. Rafael and his family told of their struggle to re-introduce traditional crops and of the difficulties of getting those crops to market. While Rafael spoke of his community’s connection to the land, he also emphasized the importance of keeping up on scientific research and of standing up to corruption in local business and politics. Rafael and his family know they cannot live as an island; they must build respectful and mutually beneficial relationships with local authorities without betraying their core principles as stewards of God’s creation.

The pastor of Congregación Getsemaní is Zaida Lara, who lives an hour away in a town called Cúpira, where she works fulltime as principal of the public school in addition to pastoring the local Presbyterian church. Zaida spends every other weekend with the church in Onova, and says it is one of her favorite places to be. We understand why that is, after hearing God’s voice speak through the glory of creation and the wisdom of these brothers and sisters. 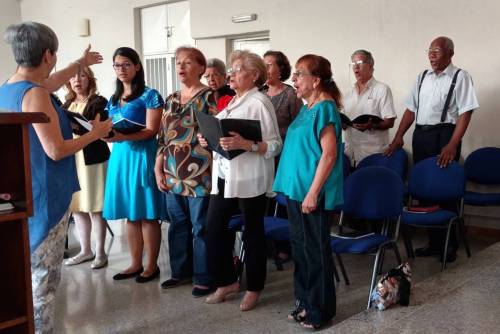 Staying engaged
Please keep the Presbyterian Church of Venezuela in your prayers, as our sisters and brothers proclaim the gospel and promote fullness of life in a polarized context. If you would like to receive more regular updates from Venezuela or consider ways that you or your church or presbytery might strengthen ties to the IPV, please contact Cristina Pitts to be included in our database. Donations to support the ministries of the IPV will be gratefully received.

As our time in Venezuela came to close, we sat down with church leaders to share reflections from the visit. IPV Moderator Berla Andrade led us in a devotional on this verse: “Jesus told them another parable: ‘The kingdom of heaven is like yeast that a woman took and mixed in with three measures of flour until all of it was leavened’” (Matthew 13:33). The text led us to envision a woman making bread, and the essential role of the yeast. It carries out its process at its own speed, there isn’t much we can do to rush it. In this verse, God is like the woman—what a blessing to have women’s work likened to God’s work! And where do we find ourselves, the church, in this parable? If we, as agents of the kingdom, are part of the yeast, then we clearly have a job before us, not to stick together in our comfort zone (the church) but to go out into the rest of the flour, to activate and transform the dough, and see what amazing things God can do in and through us. 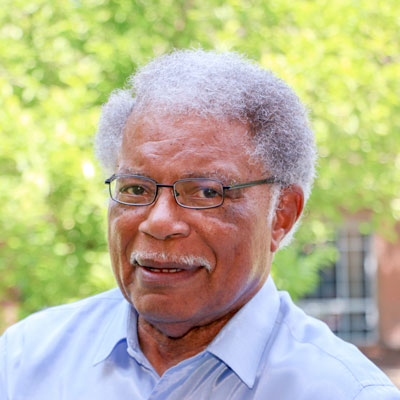