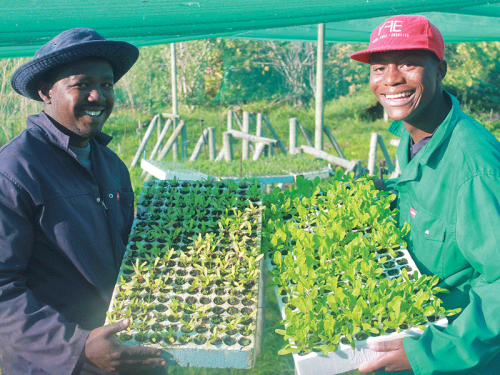 Farmer-students display their crops as part of the Agroecology Academy at the Sustainability Institute in South Africa. (Photo by Valéry Nodem)

LEXINGTON, Kentucky ­—  The Presbyterian Church (U.S.A.) has joined more than 200 organizations in signing onto a letter from the Alliance for Food Sovereignty in Africa (AFSA) calling on major donors to cease funding a major industrial agricultural initiative and support small-scale farmers in Africa.

The Presbyterian Hunger Program, Office of Public Witness, Presbyterian Ministry at the United Nations, and Presbyterian World Mission’s Africa Office agreed to support the letter. Other faith-based signatories to the letter include the Fellowship of Christian Councils and Churches in West Africa, Global Ministries of the Christian Church (Disciples of Christ), the Maryknoll Office for Global Concerns and the United Church of Christ.

“Through our One Great Hour of Sharing ministries, the PC(USA) has been supporting smaller and mid-sized farmers who use agroecological practices to increase farmer incomes and protect God’s Creation in initiatives such as the West African Initiative,” said Andrew Kang Bartlett, National Associate for the Presbyterian Hunger Program, which is one of the One Great Hour ministries along with Presbyterian Disaster Assistance and Self-Development of People.

At issue is the Alliance for Green Revolution in Africa (AGRA) and other Green Revolution Programs that AFSA and signatories contend prioritizes commodity-oriented industrial farming over the sustainable and equitable practices of African farmers.

“AGRA has unequivocally failed in its mission to increase productivity and incomes and reduce food insecurity and has in fact harmed broader efforts to support African farmers,” the letter states.

It says that AGRA has spent 15 years and more than $1 billion promoting the use of commercial seeds, pesticides and fertilizers in 13 African countries and an additional $1 billion in government subsidies for the same. During that time, the letter says the number of undernourished people in those countries has increased by 30% and that there is no evidence yields, incomes or food security has increased significantly.

The letter calls AGRA’s methods “an ill-conceived approach” that causes environmental harm, increases farmers’ dependence on corporations, and prioritizes high yields over addressing hunger and poverty, “including centuries of exploitation of the continent’s people and natural resources that have not benefited Africans.”

AFSA raises a specific concern that AGRA’s president, Agnes Kalibata, is leading the United Nations Food Systems Summit Sept. 23 in New York. The summit has been denounced by many organizations and speakers as “disproportionately influenced by corporate actors” and “a clear playground where corporate interests have decided to stamp the authority in the food system.”

“When the Food Systems Summit was announced in 2019, it was hailed as an extraordinary effort to transform the future of global food systems,” said Sue Rheem, PC(USA) Representative to the United Nations. “It was intended to be a people’s summit for everyone everywhere listening to local people — for food to be produced and consumed around the world. However, in heeding to the influence of corporations, the organizers have reneged on that promise, and it’s important for civil society to raise our voices and hold them accountable.”

Among the organizations being called to withdraw support from AGRA and similar initiatives is the Bill and Melinda Gates Foundation, which has heard similar calls from organizations such as the Southern African Faith Communities’ Environment Institute (SAFCEI), also a signatory of the AFSA letter.

“Whereas the world is faced with major human, environmental, and climate crises, it is urgent to change course and turn to a development model based on truly sustainable practices, equity, and justice,” the AFSA letter states. “Farmers all over Africa have shown far more promising results sharing knowledge and working with scientists to establish low-input farming methods that leave the control of production in the hands of African farmers. We urge you to listen to the farmer movements from across the continent that have laid out their vision for a healthy, sustainable, and equitable food system.”