#GivingTuesday – Join the PC(USA) in responding to a world in need! Give now!
Make A Donation Click Here >
Home › PC(USA) leaders continue their work dismantling the Doctrine of Discovery 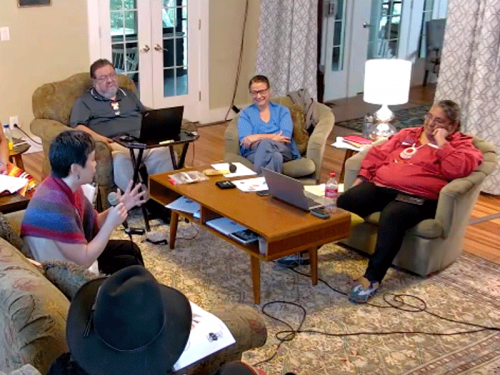 The Rev. Dr. So Jung Kim (with microphone) hosted an Everyday God-talk of Indigenous Communities at Stony Point Center in New York. Pictured from left to right are the Rev. Irvin Porter, Elona Street-Stewart and the Rev. Danelle McKinney. (Contributed photo)

LOUISVILLE — In response to a referral from the 224th General Assembly (2020) of the Presbyterian Church (U.S.A) for the Presbyterian Mission Agency to develop theological resources for how the church has benefited at the expense of Native American peoples, a consultation was held with Native American leaders at Stony Point Center in New York Sept. 13-15.

The Rev. Dr. So Jung Kim, associate for Theology in the Office of Theology & Worship, hosted the first “Everyday God-talk of Indigenous Communities: Our Soul, Body and Heart” on “Dismantling the Doctrine of Discovery.”

Indigenous soul and the Doctrine of Discovery

The Rev. Hollie Haile Thompson, a blood member of the Shinnecock Nation in Long Island, New York, became in 1986 the first Native American woman ordained as Minister of Word and Sacrament in the PC(USA). Honorably retired as a member of both the Racial Equity Advocacy and Native American Consulting committees, she describes how the Doctrine of Discovery granted Christian ecclesiastical law to any European Christian nation that came to the New World.

Shawnee scholar and author Steven Newcomb refers to the Doctrine of Discovery as the Doctrine of Domination because it gave permission to colonists to treat Native Americans as enemies of Christ. With permission from the church, the European colonists completely ignored, dismissed and eradicated the existence of Native people in the land, saying that it was “an empty land” — and that if there are people here, they are not noteworthy.

The Rev. Irvin Porter, a descendant of three Native American tribes — Pima, Tohono O’odham and Nez Perce — is associate for Native American Intercultural Congregational Support in the PC(USA). He said that one of the more destructive elements in the Doctrine of Discovery was the ethnocentric idea that European cultural ways were far superior to those found among the Indigenous peoples of “discovered” lands, no matter where they were.

“The ‘soul’ of the Indigenous populations was not considered sacred until much later,” Porter said.

Porter works as a liaison with the 95 Indigenous congregations in the PC(USA) and is pastor of the Church of the Indian Fellowship in Tacoma, Washington. He said when the church began its mission work among the Indigenous people of this land in 1741, the wisdom and knowledge of the Natives were ignored. Considered un-Christian, their voices were not considered worth saving, Porter said.

Porter sees the repercussions of this continuing today.

“Native Americans are asked to organize their worship services and events in their tradition only when the church wants them,” he said. “They are not considered as ongoing wisdom or another voice in the Creator’s wisdom.”

Indigenous body and the Doctrine of Discovery

Each Indigenous presenter emphasized how the Doctrine of Discovery left intergenerational and historical trauma within tribal communities. Between 1869 and to the 1960s, hundreds of thousands of Native American children were taken from their homes and placed in boarding schools operated by the government and churches. The number of children taken to schools is unknown. But in these schools far from home, these children were punished and even tortured for speaking their native language and for representing their cultural or traditional practices. They suffered physical, sexual and spiritual abuse along with neglect.

“If we held a moment of silence for each child who died in the boarding schools, we’d be silent for 13+ years,” Thompson said. “This truth must not be softened for our Christian siblings. Jesus did no less.”

The PC(USA) has apologized for its role in administering some of these boarding schools for Native children. But for leaders such as ruling elder Elona Street Stewart, Co-Moderator of the 224th General Assembly (2020) and executive of the Synod of Lakes and Prairies, this is only the first step.

‘If we held a moment of silence for each child who died in the boarding schools, we’d be silent for 13+ years.’

The Rev. Danelle McKinney, an enrolled member of the Sisseton Wahpeton Ovate tribe and a student rights specialist at Haskell Indian Nations University in Lawrence, Kansas, believes the church apologized to Native Americans without understanding the historical depth of destruction caused by the Doctrine of Discovery.

For example, how many people know about the largest mass hanging in U.S. history? On December 26, 1862, 38 Dakota warriors were led to the gallows in chains. Their “crime” was defending their starving people on the new reservation during the Sioux uprising earlier that year.

“One warrior admonished the mourners, saying they would be with the Creator forever,” McKinney said. “And then he told them to always tell their children about this day so that they would not be forgotten.”

As the EGT conversation shifted to a conversation about the church repenting of its sins through concrete reparation, McKinney said the PC(USA) doesn’t seem to understand Native American needs.

This truth must not be softened for our Christian siblings. Jesus did no less.

“And frankly the Church doesn’t seem to care,” she said.

Porter added that Native Americans have suffered from the realities of the Doctrine of Discovery for generations, all while being told that theologically the church is the Body of Christ.

“That Body of Christ is either severely out of shape or suffering a slow death,” he said.

When talking about the body in an online presentation, Ruling Elder June Lorenzo, Laguna Pueblo, Navajo (Diné), stressed how Christianity negatively affected the faith and life or her people because it was such a disembodied religion.

“It was so messed up because Christianity separated the head from the body,” she said. “They disembodied us, disconnecting us from our own bodies and the land.  They made it hard to have a relationship with Mother Earth.”

As these leaders began trying to understand how to make reconciliation happen, Lorenzo, who advocates in tribal and domestic courts as well as for legislative and international human rights, talked of how the dominant society created churches on the reservation as a means of “civilizing the heathens” away from their own tribal languages and cultures.

Once the church was populated, Native congregations were left by mission boards to survive — or not, she said. To this day many Native American Presbyterian congregations are treated as stepchildren.

“It can be mild neglect or outright racism,” she said. “And when these Native Presbyterians show up in the cities at white churches, they can also be treated the same way.”

Indigenous heart and the Doctrine of Discovery

As McKinney learned about the Document of Discovery and its tragic historical consequences — including the hanging of the Dakota 38 — she acknowledges how hard it is to celebrate Christmas, knowing that on the day after celebrating the birth of Christ, 38 of your people were killed in 1862. 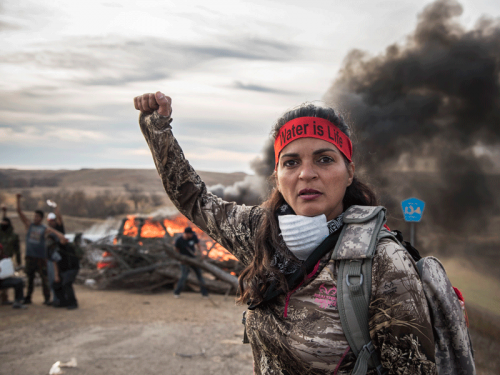 Despite how the Doctrine of Discovery left intergenerational and historical trauma within tribal communities, Indigenous presenters emphasized how inspired they are by the heart of their people. Shown here is a “water protector” at Standing Rock in 2016. (Photo by Avery White/Creative Commons License)

Yet McKinney is so inspired by the hearts of Indigenous people. In 2016, as members of the Standing Rock Sioux nation and its supporters gathered as “water protectors,” hoping to stop the construction of 1,170-mile pipeline that moves crude oil from the Bakken oil fields in western North Dakota to refinery facilities in Illinois, she tearfully said, “That was the lifeblood and love for who we are. Who knew there so many people who could unite for common good?”

“Many Christians didn’t want the water protectors there, but they didn’t count on our hearts,” she said. “This is bringing us back to life — it’s our defibrillator.”

The oldest known human settlement in North America, which dates back more than 16,500 years, is located at the site of an ancient Nez Perce village known as Nipe’he, near the confluence of the Snake and Salmon rivers. That’s more than 15,000 years before America was “discovered.”

The Everyday God-talk conversation with Indigenous theologians, ministers, educators and activists on “Dismantling the Doctrine of Discovery” will continue in 2023.