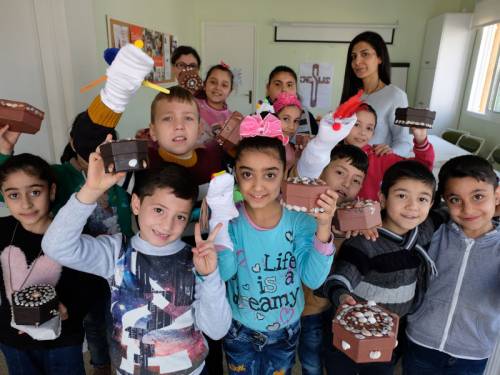 Refugee children from Iraq and Syria are benefiting from a trauma resiliency program that seeks to reinforce who they are in the eyes of God and that they are loved and valued. (Photo courtesy of Scott Parker)

LOUISVILLE — In Lebanon, a country “bursting at the seams” with refugee families, Scott Parker helps migrant children from Iraq and Syria unpack the trauma they have experienced.

Parker, a Presbyterian Church (U.S.A.) ecumenical associate, delights in seeing children start coming to terms with their painful pasts, but he acknowledged that deep feelings they express can be unsettling to hear.  One day while playing a game with puppets, Parker asked the children to pretend they were on a bus and something bad happened. An 8-year-old boy blurted out, “Oh, a terrorist just exploded a bomb on the bus.”

“That’s the first thing that popped into his head,” Parker said. “Even if he doesn’t have any family that have experienced (a bomb attack), it’s something they know has happened and it’s talked about.”

Such candid sharing is what Parker is seeking from the children. “When kids are able to slow down and play and be in a safe place, that helps them talk about difficult things.”

Parker works with a Middle East Council of Churches ministry called Strong Kids, Strong Emotions, a play-based trauma resilience program in Beirut for refugee children ages 7-12. He said some estimates place the refugee population in Lebanon as high as 2 million, which is a substantial portion of the country’s total population of nearly 6.85 million people.

Refugee families have moved to Lebanon to escape violence in their home countries. While they are in a safer environment, life is still harsh. Most refugees live in cramped apartments that often lack kitchens, electricity, and running water, and they have limited employment opportunities. “Out of 65 classifications of jobs, refugees are eligible to work in only about two of those,” Parker said. “You have a high cost of living, and most refugees are working for extremely low wages.” Even without the ordeals that most refugee families have experienced, the financial pressures alone cause enormous stress, he added.

“We often have kids who come to us and who will say something like, ‘This is the only time of the week I am happy,’” Parker said. “This is a hard thing to hear but it is also why we are here. We are able to give the kids a couple of hours a week where they can be kids and have a safe space, and it is making an impact.”

While Strong Kids, Strong Emotions is “on the right track,” Parker said the program’s leaders want to see more children served, the length of the program expanded, and the frequency of the gatherings increased.

Currently, the program serves 15 children for 12 Saturdays, and then a new class begins. He hopes one day that the program will be able to meet multiple times a week in an afterschool setting.

“The long-term goal is to work with a larger group of kids for an indefinite time,” Parker said. “Experts tell us the best way to do trauma resiliency is through long-term relationships, but logistically we just don’t have that luxury right now.”

The aim of Strong Kids, Strong Emotions is not just to help children identify and express difficult emotions, but also to help them learn how to manage them. “This is the time to help kids learn better skills” for managing feelings, Parker said. “Once they get into adulthood it gets tougher.” 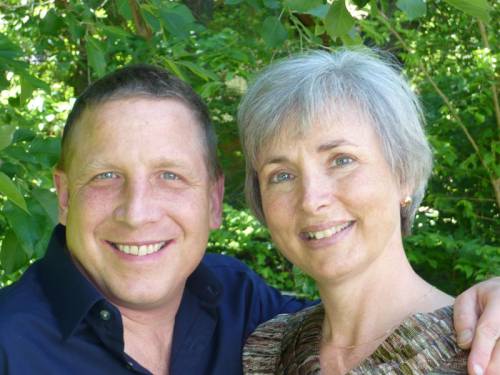 Scott and Elmarie Parker have served in the Middle East since 2013. (Contributed photo)

The program serves children from both Christian and Muslim backgrounds, and Parker noted interfaith friendships have developed quickly. He explained that many of the children come from communities where Christians and Muslims live together in harmony. Parker and his wife, Elmarie, the PC(USA) regional liaison for Lebanon, Syria and Iraq, have served in the Middle East since 2013.

Parker celebrates when he hears children express positive feelings about themselves and their futures. One day, near the end of a session, he was playing his guitar, and he invited the children to reflect on things that made them thankful. “One of the kids piped in, ‘I am glad I was born.’ Another said, ‘I am glad I woke up this morning to a brand-new day.’ Things like this are very small but very powerful.”

While moments like this are dear to Parker, his focus is on the program’s long-range impact on the children.

“I hope in the time we have with them that we can reinforce who they are in the eyes of God and that they are loved and valued,” Parker said. “That is something they can take with them, which will serve them for the rest of their lives.”