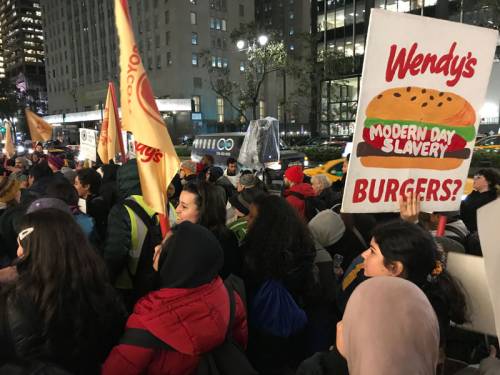 Despite cold and rainy conditions, more than 500 people turned out Monday to protest Wendy’s refusal to support the Fair Food Program. (Photo by Andrew Kang Bartlett)

“We are here, standing under the blessings of the rain in solidarity with our brothers and sisters from Immokalee, Florida,” Imam Muhammad Adeyinka Mendes of the Muslim Center in Greater Princeton in New Jersey said in front of the Trian Partners Park Avenue headquarters. “This rain is a sign that your cries and your prayers have been answered by God, have been answered by the divine.”

Mendes was one of numerous speakers who addressed more than 500 people who turned out Monday to protest Wendy’s refusal to support the Fair Food Program, a “partnership among farmers, farmworkers, and retail food companies that ensures humane wages and working conditions for the workers who pick fruits and vegetables on participating farms,” according to its website. The program is an initiative of the Coalition of Immokalee Workers’ (CIW). 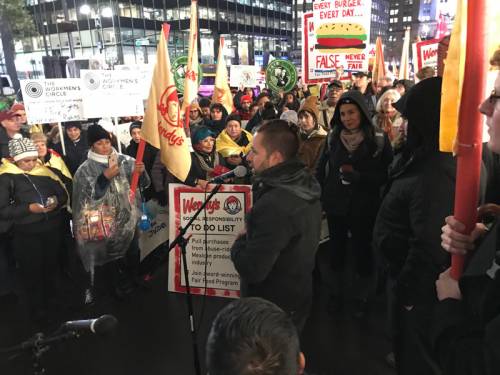 Protests of Wendy’s started in 2013, when farmworkers and their allies first called on Wendy’s to join the Fair Food Program. In 2016, the PC(USA) became the first Christian denomination to endorse CIW’s boycott against Wendy’s.

After the boycott began, the fast-food chain began purchasing tomatoes from farms in Mexico, which have notoriously bad human rights records. Earlier this year, following two huge marches in 2018, Wendy’s board announced it was moving tomato purchases to farms in the United States and Canada. But it is still not supporting the Fair Food Program,  and Andrew Kang Bartlett, the Presbyterian Hunger Program’s Associate for National Hunger Concerns, said, “Wendy’s assurances that working conditions are fine in their greenhouse suppliers’ operations are not holding up against the hard evidence.”

Kang Bartlett cited a Calgary Herald report about a documentary that recounts harsh living and working conditions in Canadian farms, “not to mention the well-documented failures of the superficial auditing companies tasked with protecting workers from widespread labor and safety violations.”

Kang Bartlett joined a group from the Stony Point Center, located an hour outside of New York City, for the protest. 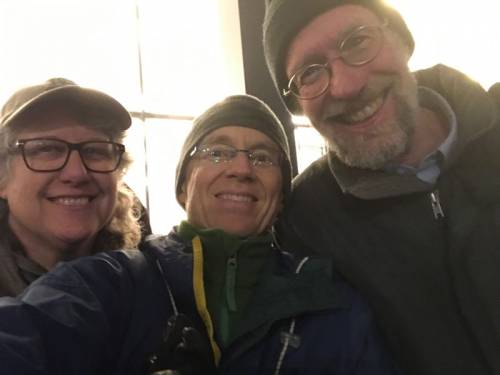 Andrew Kang Bartlett, the Presbyterian Hunger Program’s Associate for National Hunger Concerns, center, was among 500 people in New York Monday protesting Wendy’s refusal to support the Fair Food Program. To his right is Julie Taylor, executive director of the National Farm Worker Ministry. Also pictured is David Wildman, executive secretary for Human Rights & Racial Justice with the United Mehtodist Church’s General Board of Global Ministries. Like Kang Bartlett , Wildman is a member of the National Farm Worker Ministry board of directors. (Photo by Andrew Kang Bartlett)

“It was so inspiring to be with the farmworkers and allies from all around the Northeast at the Wendy’s office in Manhattan,” Kang Bartlett wrote. “The coalition of Immokalee workers has come repeatedly to New York City to ask Wendy’s to do the right thing and join the Fair Food Program. And Lupe Gonzalo at the end of the rally following the march promised that we would be back again and again.

“I joined the march as a representative of PC(USA) and to show that we stand with the farmworkers and their long-term struggle,” he wrote. “In these days of turmoil and bad news, the CIW stands tall in their faithfulness and commitment to building better lives for themselves and their families and to the wider vision of justice for all. I am always grateful to them for the hope they engender in me and it is a joy to stand in the rain and march together for a world where farm workers are given the respect and treatment they deserve.” 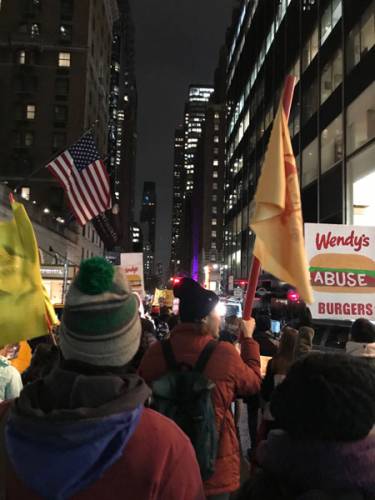 Will Summers, who farms at Stony Point Center, said that food justice is an important part of the work at the center. More than half of the members of the community based at the center have participated in CIW actions. He said he first became involved with the farmworkers group in a six-day fast at the headquarters of Publix grocery stores.

Over the years, CIW action has brought numerous companies into the Fair Food Program, including Yum! Brands — Taco Bell, Pizza Hut and KFC — which, like the PC(USA), is based in Louisville, Kentucky.

Summers said actions like Monday’s protest are important not only to hold corporations accountable but to raise awareness.

“So much of this stuff is invisible,” he said in a video interview with Kang Bartlett. “People aren’t aware of what’s going on with farm workers.”