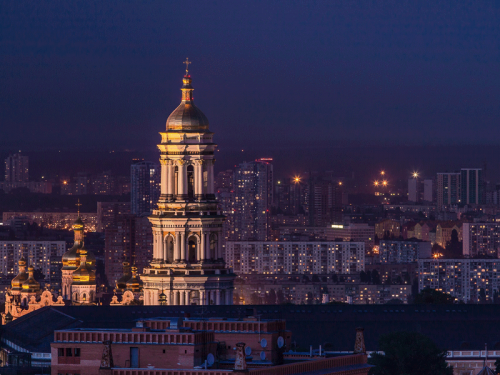 The Ukrainian Capital of Kyiv. (Photo by Eugene via Unsplash)

LEXINGTON, Kentucky — The Presbyterian Church (U.S.A.) is joining a dozen fellow faith-based organizations, including several other mainline denominations, in calling for peace in a simmering conflict involving Russia and Ukraine.

Concerns have risen in recent weeks that Russia is on the verge of invading Ukraine, once part of the Soviet Union, as it has amassed 100,000 troops along the Ukrainian border. Russia has denied any such intentions, but also laid out a series of demands the United States and Western allies have firmly rejected.

“Both Russia and the United States are contributing to the escalation of tensions, and both need to consider who will bear the brunt of war, who will bear the grievous consequences,” said Catherine Gordon, Representative for International Issues in the PC(USA) Office of Public Witness. “All sides, the United States, Russia and Ukraine, bear the responsibility for preventing war and it’s the utmost priority to prevent the suffering of innocent people. We must prioritize patient good-faith diplomacy.”

A statement from the groups — including the Episcopal Church, United Methodist Church, and the United Church of Christ — was posted on the website of the Friends Committee on National Legislation and will be sent to all members of the U.S. Congress and the White House. Here is the full text of the statement:

STATEMENT BY FAITH GROUPS ON THE SITUATION IN UKRAINE

As people of faith, we are united in our conviction that we must do all we can to achieve and secure peace when there is the threat of conflict. Political leaders must do everything in their power to protect human lives and prevent war.

We are gravely concerned by Russia’s apparent preparations to conduct a military invasion of, or to otherwise attack or destabilize, Ukraine. We urgently call on all parties, including the United States, to invest in efforts that will prevent violent conflict and to avert actions that will likely lead to grievous and unnecessary human suffering, long-lasting environmental destruction, and widespread economic harm.

To this end, we reject the threats and intimidation that escalate tensions and the likelihood of war. Rather than relying on militaristic approaches, our leaders must invest in efforts to sustain peace and prevent harm to those who would suffer the most from the devastating and long-term impacts of conflict. Only by vigorously pursuing all avenues for peace can we fulfill our sacred duty to respect the equal dignity and worth of every person.

Signatories as of 5 p.m. Eastern Time on Thursday:

Global Ministries of the Christian Church (Disciples of Christ)

The United Methodist Church – General Board of Church and Society