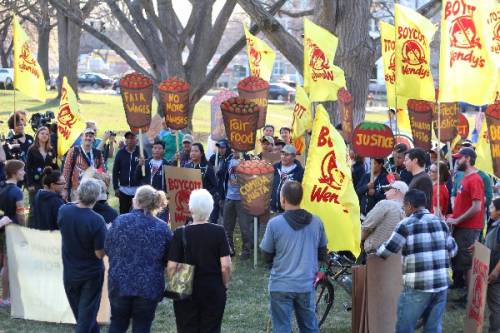 Coalition of Immokalee Workers and supporters demonstrate against Wendy’s Restaurants in March on the campus of the University of Louisville. (Photo CIW)

In support of their act of conscience, the Presbyterian Church (U.S.A.) issued a letter to Wendy’s President and Chief Executive Officer Todd Penegor citing its concern over Wendy’s decision to abandon US workers who are protected by the Fair Food code of conduct rather than join 14 corporations that currently recognize Fair Food standards. Stated Clerk of the General Assembly, the Rev. Dr. J. Herbert Nelson, II, interim executive director of the Presbyterian Mission Agency, Tony De La Rosa, and the Rev. Denise Anderson and the Rev. Jan Edmiston, Co-Moderators of the 222nd General Assembly (2016), signed the letter.

The PC(USA) has supported the CIW’s past efforts to secure Fair Food agreements from other national fast food companies such as Yum Brands, McDonalds, Burger King and Subway. In May 2016, PC (USA) became the first Christian denomination to officially endorse the call for a national boycott of Wendy’s products.

“The Presbyterian Church (U.S.A.) has a longstanding commitment to the basic human rights and dignity of all who labor to provide food for our tables, here in the United States and across the world,” noted Nelson. Citing the letter, he said, “Our concern, in this instance, is the failure of Wendy’s to provide adequate protection and justice for the workers who labor in the fields to provide tomatoes for Wendy’s products.”

According to a press release from CIW, fasters will begin a daily presence on OSU’s campus and in front of Wendy’s headquarters in suburban Columbus on Monday, March 20. The fast will break on March 26 when the CIW arrives in Columbus to mark the one-year anniversary of the national boycott. In the release, Laura Kington, an Ohio Fair Food member and OSU alumna, stated:

“We are fasting in solidarity with farmworkers, many of whom have had to go hungry while harvesting the food we all eat because of Wendy’s indifference to their exploitation. Wendy’s has a fundamental responsibility to listen to the farmworkers who make their profits possible, and listen to their own neighbors here in Columbus. To ensure human rights for farmworkers, Wendy’s must join the Fair Food Program.”

The FFP is a partnership between farmworkers, Florida tomato growers and more than a dozen major food retailers. Under the agreement, participating retailers agree to only purchase from suppliers who meet a worker-driven Code of Conduct, including a zero-tolerance policy on slavery and sexual harassment. Retailers also pay a penny-per-pound premium that is directed to the workers. Instead of supporting Florida growers who uphold the FFP, Wendy’s switched its purchases to Mexico sources, “where human rights violations are manifold and workers have little security or protection.”

“People of faith have a moral obligation to stand together with people impacted by exploitative structures,” said Andrew Kang Bartlett, national associate of the Presbyterian Hunger Program. “Many Presbyterians have enormous privilege and access to power, which gives them added responsibility to show up in the name of justice.” To act in support of farmworkers, visit www.boycott-wendys.org.

“We are encouraging Presbyterians around the country to pray for the Coalition of Immokalee Workers and the fasters in Columbus on March 24, the National Day of Prayer and Fasting,” added the Rev. Rebecca Barnes, coordinator of the Presbyterian Hunger Program.

The Presbyterian Hunger Program is supported by your gifts to One Great Hour of Sharing.

The letter to Wendy’s President and Chief Executive Officer Todd Penegor is available for download at this link.