The Office of Public Witness held a webinar on the power of protest Wednesday. (Screen shot)

LOUISVILLE — As protests against racism continued in Oregon and other parts of the country, the Presbyterian Church (U.S.A.)’s Office of Public Witness held a webinar this week explaining the importance of challenging the status quo and making one’s voice heard through the ballot box.

The Washington office also highlighted the need for Christians to join the fight for justice that has garnered headlines for months now following the deaths of innocent African Americans, such as George Floyd, Ahmaud Arbery, Tony McDade and Breonna Taylor, at the hands of police and white vigilantes.

Protest is not just a form of political engagement but also “a part of our faith,” explained the Rev. Jimmie Hawkins, director of the Office of Public Witness (OPW).

“We say that protest for social justice really equals spiritual advocacy and I think that’s one of the things that those of us in the faith community really need to hit harder on,” said Hawkins, who pointed out that Jesus himself turned over tables when he felt that the temple of God was being misused. “This is a part of how we see God wants us to live.” 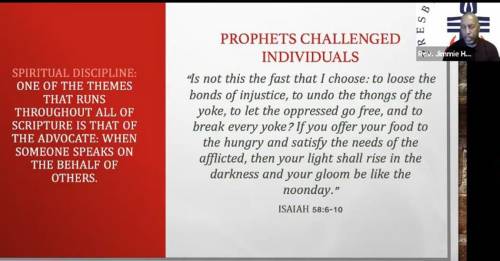 There are many examples of spiritual advocacy in the Bible, according to the Rev. Jimmie Hawkins, director of the Presbyterian Church (U.S.A.) Office of Public Witness. The prophets often advocated for the poor and the oppressed. (Screen shot)

Hawkins also noted that protesting is embedded into the foundation of the country and something that Americans have a right to do.

“This country was founded in protest,” said Hawkins, adding, “It’s really amazing when the government and when authorities — and particularly the police — respond so violently to people protesting peacefully when it is a part of the entire consciousness of this nation.”

Recently in Portland, Oregon, federal agents sent in by President Donald Trump have clashed with protesters who’ve been pushing for systemic change. The Justice Department’s Office of the Inspector General is reportedly investigating allegations into how the matter has been handled, including use of tear gas and items sometimes referred to as “less-lethal munitions,” according to NPR.

In these protests, “we have people who are exercising their First Amendment rights in the midst of a health pandemic because they see that there’s a need to stand up for justice, and by exercising those rights … are then being criminalized specifically for just doing what the law allows. How is that possible?” said the Rev. Shanea D. Leonard, Associate for Gender and Racial Justice for Racial Equity and Women’s Intercultural Ministries. “At the end of the day, when you look at who’s really being targeted the root is racism and white supremacy.”

Fellow panelist Langley Hoyt noted that many states have put laws in place that provide excuses for police to become violent with protesters. Hoyt also cautioned against labeling protesters as violent.

The final panelist, the Rev. Aundreia Alexander, an associate general secretary for the National Council of Churches, talked about how important it is to back up protesting with voting.