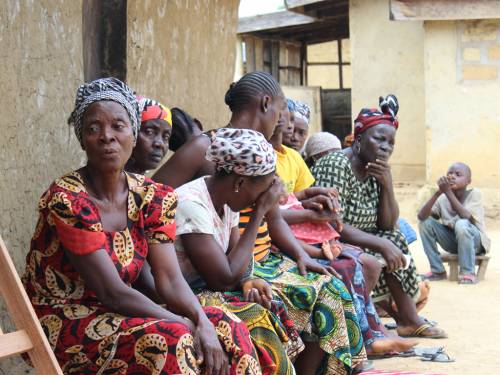 Many of the women from the Wellkerma Village in Liberia are widows who took the lead in WAI training, providing new sources of income for the community and education opportunities for their children. (Photo by Rick Jones)

MONROVIA, Liberia – A Sierra Leone resident recently said that the drive from Kenema to the Liberian border is like riding six hours inside of a concrete mixer. Presbyterian Church (U.S.A.) delegates visiting the region agreed with this assessment after making the trip on the all-dirt road.

For those who are used to traveling on paved, two-to-four lane roads, driving on unmaintained dirt roads can be a major reality check. But for the people living in the remote villages, this is daily life. The best way to get from village to village is by motorbike. People walk for miles from village to marketplace and back in daylight and dark. It’s what they do.

The delegation found villages in Liberia had made great progress in cooperation with the West Africa Initiative (WAI). Currently, there are 17 groups connected with WAI, serving approximately 4,000 direct beneficiaries. WAI, which was established in 2008, is helping communities become self sufficient through agriculture, business development and work toward common societal goals, not merely individuals or villages.

Wellkerma Village, outside the city of Monrovia, suffered great losses during the country’s war and the recent Ebola crisis. Many men in the village were killed, leaving the women to step up and put their words into actions.

“We have done well with your support. The farms here are well managed,” said Pala Beyan, one of the women leaders in the village. “Our source of life here is farming. Through WAI, we have been able to not only organize ourselves but help other villages. For the first time, we have unity among villages.”

“People will come to us, seeking to join, but we may not always have the ability to help them,” said Daniel Nurpah, one of the village leaders. “All we can do at times is simply encourage them and many are following in our footprints, observing what we are doing and then putting that into practice in their own villages.” 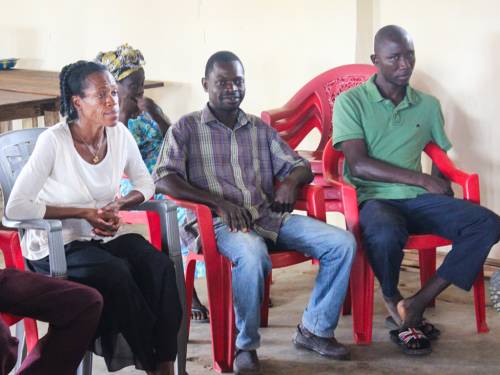 Several residents of a village in Ganta have started their own businesses in beekeeping and are starting to see profits. (Photo by Rick Jones)

Wellkerma, like many villages in Liberia, grows corn, peanuts and various fruits and vegetables. Many of the residents, through WAI training, have begun working in beekeeping. Some individuals have begun to profit from the work.

The town of Ganta is believed by many to be the breadbasket of Liberia. The delegation visited a village that has seen growth in many areas thanks to the hard work of both men and women.

“I am a widow with 11 children and I began working on my own garden from what I learned with the WAI training,” said Jannet Kollie. “We are able to eat from the garden and sell some of the vegetables for money.”

“I believe that all of the hope you have given us is changing lives,” said James Gbozee. “I have five children who were not in school. Now, I am able to send all of them to get an education. Lives are changing and if you come back, you will see the difference.”

Presbyterian Disaster Assistance, Self-Development of People and the Presbyterian Hunger Program are jointly responsible for WAI in Sierra Leone and Liberia. Representatives from the ministries say they are encouraged by what they saw at all five Liberian villages over the course of the week.

“I am inspired to see how far you’ve come with this program,” said Luke Asikoye, PDA international associate. “You have suffered, but you have strength and have broken through the wall and not only helped improve your situation, but are making strides to improve education.”

Many of the young people in the villages spoke of their desires to pursue an education. Some want to be teachers or farmers, others seeking to become mechanical engineers or doctors. One even stated he wishes to become a senator.

“The young people we visited have dreams just like everyone else and we’ve told them they can be anything they want to be,” said Valery Nodem, PHP international associate. “They have the ability and determination to do whatever they want to do.”

The Rev. Alonzo Johnson, SDOP coordinator, is making his first trip to the region and says he’s deeply moved by what he’s seen.

“Its inspiring for us to see them doing everything for themselves,” he said. “They are teaching us in America how to be independent and not depend on the government to fix things. They have taken advantage of their own power.”

The West Africa Initiative is made possible by gifts to the One Great Hour of Sharing.