The Rev. Jimmie Hawkins was part of a Poor People’s Campaign event Monday 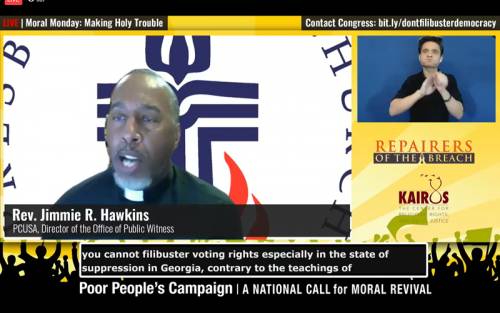 The Rev. Jimmie Hawkins, Associate Director of Advocacy for the PC(USA), was one of more than a dozen faith leaders that spoke during the Poor People’s Campaign event. (Screenshot)

LEXINGTON, Kentucky — Presbyterian Church (U.S.A.) Associate Director of Advocacy the Rev. Jimmie Hawkins participated in a Poor People’s Campaign event Monday, calling for the end of the filibuster in the United States Senate.

“We are here as a people, as a denomination, as people of faith, to stand with the Poor People’s Campaign in this fight to make America the country God intends it to be — a place where people are paid fairly and allowed to vote justly,” Hawkins said during his segment in the virtual event where representatives from numerous denominations and faith traditions spoke. {Hawkins’ talk begins at 54:08.)

The filibuster has become an issue in recent months as the administration of President Joe Biden attempts to pass several pieces of legislation opposed by congressional Republicans pertaining to voting rights, the minimum wage, infrastructure and other legislative priorities.

The filibuster, according to the Senate’s own glossary, is  an “Informal term for any attempt to block or delay Senate action on a bill or other matter by debating it at length, by offering numerous procedural motions, or by any other delaying or obstructive actions.” A three-fifths majority of senators – 60 votes — is needed to end debate and move to a vote. Senate Democrats contend the filibuster needs to end to pass legislation Republicans are blocking.

In the Poor People’s Campaign event, leaders of the movement, a revival of an organization started by the Rev. Dr. Martin Luther King Jr. shortly before his death on April 4, 1968, contended that the filibuster has historically been used as a tool by white supremacists and the powerful to block legislation that would benefit marginalized communities and the poor. 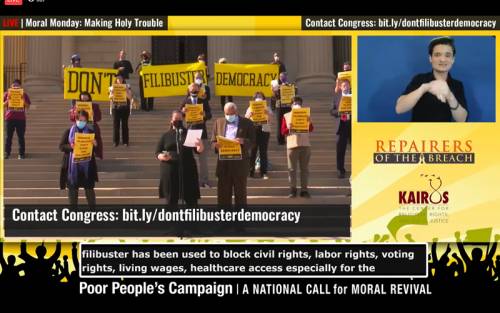 Presbyterian minister and co-chair of the Poor People’s Campaign the Rev. Dr. Liz Theoharis spoke on the steps of National City Christian Church in Washington D.C. during the Moral Monday event. (Screenshot)

“The filibuster has been used to block civil rights, labor rights, voting rights, living wages, healthcare access, especially for poor and low-wealth Black, brown, white, Asian and Indigenous people,” said a statement from the campaign that was read during the event by the Rev. Dr. Liz Theoharis, a PC(USA) minister who is co-chair of the Poor People’s Campaign. “The filibuster continues to facilitate idolatrous policy platforms about who deserves to thrive and who does not.”

Theoharis appeared on the steps of National City Christian Church in Washington D.C. with a number of other faith leaders to denounce the filibuster. Other participants appeared in individual video feeds, including Hawkins and The Poor People’s Campaign co-chair, the Rev. Dr. William Barber.

“We come because we as clergy, pastors, imams, rabbis, people from the Hindu community and the Muslim community are challenging the immorality of the filibuster,” Barber said. “We can no longer have an impoverished democracy because a minority group of senators want to shut down open debate and shut down bringing issues to the floor, address the critical issues that face us as a people in this nation.

“We have 140 million-plus people that are in poverty and low wealth. In this nation, we have 62 million people that make less than $17 an hour, we have over 80 million people who either are uninsured or under insured in this nation. We have serious issues to address in terms of coming out of this pandemic, rebuilding from the bottom up and building forward greater in this nation. And we cannot have a system that actually is rooted in an ugly history.”

Hawkins echoed Barber’s concerns during his appearance, concerns which Hawkins said are rooted in Presbyterian policy.

“The Presbyterian Church declared, and I quote, ‘When economic conditions have not been just, the church has spoken out forcefully,’” Hawkins said, quoting the 2010 report, “Living Through Economic Crisis: The Church’s Witness in Troubled Times” (page 5). “‘The Social Creed 1908 denounced the appalling conditions of the working poor and demanded a living wage, safe working conditions, the right of all people to self-maintenance and the abatement of poverty. The 208th General Assembly in 1996 announced the very existence of poverty as intolerable.

“The church affirms that people must have the opportunity to participate in economic decisions that will impact them. Thus, the church has long endorsed the right of all workers to choose to organize for collective bargaining. We as Christians are called to envision a new economic paradigm, a new way of incorporating biblical values to economic life. We do not work to earn money for social status. Rather, we work to help our neighbors, and give glory to God. We do not see wealth as a reward and a license to consume, but as a social responsibility.

“Therefore, we proclaim that you cannot filibuster voting rights, especially in light of the voter suppression in the state of Georgia, which is contrary to the teachings of our faith. And through our 2008 social witness policy statement, ‘Lift Every Voice,’ we call for a constitutional amendment to guarantee every American citizen the right to vote, national universal voter registration, voting by mail, early voting, strengthening absentee ballot voting, greater accessibility for the disabled and minority language voters, to create a national paid holiday for voting, enforcement of the Voting Rights Act, the rejection of voter ID requirements.”

The Office of Public Witness is one of the PC(USA) Advocacy Offices, which are part of the Compassion, Peace & Justice ministries of the Presbyterian Mission Agency.