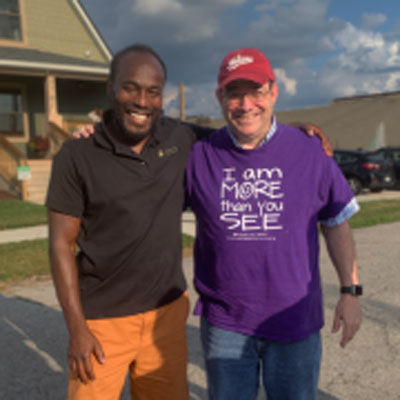 De’Amon Harges, at left, and his longtime friend, the Rev. Mike Mather, offered a keynote address to the NEXT Church national gathering Wednesday. (Contributed photo)

CINCINNATI — The Rev. Mike Mather, who along with his longtime friend De’Amon Harges presented Wednesday during the final day of the NEXT Church national gathering, took a walk in South Africa a few years ago with a South African who related a joke about apartheid he’d heard years before.

There are two solutions to apartheid, the man told Mather, one miraculous and the other realistic. The realistic solution involved God sending angels to bring about an end to the scourge. The miraculous solution “is that we will sit down and talk with our enemies.”

Even churches, said Mather, pastor of Broadway United Methodist Church in Indianapolis, sometimes “want us to see the scarcity, the need and the brokenness, rather than the abundance that’s breaking out all over.”

Harges, also a leader at Broadway United Methodist Church, is known as “The Roving Listener” because of his practice of keeping his ear close to the ground, especially in his 10-block-long Indianapolis neighborhood.

Harges told the story of his mother, born in South Bend, Indiana in 1952. To honor her birth, his grandfather planted what became known in the neighborhood as The Learning Tree, a place for young people to gather and listen to their elders, especially throughout the political tumult of the 1960s.

“My question is always, ‘How do we engage people?’ Mather said. “To De’Amon, it’s ‘How do we get engaged in what God is doing all around us?’ De’Amon is a very gifted listener. He notices what other people don’t notice.”

The two repeated this mantra several times during their hour-long talk: “Pay attention. Be astonished. Tell somebody.”

“I make my neighbors my business partners,” Harges said. One, Judith, who died a couple of years ago, was a quadriplegic who was angered whenever she heard references to church members and neighbors being God’s hands and feet. “No, no, no,” Mather said. “God is active and present in the most unexpected places.”

One such unexpected place occurred when the church was looking everywhere for someone to tutor students at the church after school — everywhere, Mather said, except its own neighborhood, where a woman named Maya, who worked nights for a communications company, had been quietly tutoring children after she woke up each morning. “I cover everything from phonics to Sophocles,” she told him. Every Friday, she prepared and served up a barbecue to the children and their families. The children shared with their families what they’d learned during the week.

“I should have been saying, ‘How can we be part of what you’re doing?” Mather said.

The two men then led another hand-squeezing exercise, which included these instances: Squeeze a hand if you believe in the power of love, if you’ve ever given money and never expected it back, if you are ready to work as a witness to God’s love, mercy and abundance.

During a question and answer session following their talk, Mather, Broadway United Methodist Church’s pastor since 2003, said that Harges was part of task force early on in Mather’s ministry at the church. The task force determined that “if there aren’t at least three people committed to a program or practice, we just aren’t going to do it anymore,” Mather said. Now the church names every practice or program that it’s ending and even holds a public funeral to solemnize the occasion.

“We buried a thrift shop that people didn’t want to run anymore,” Mather said. “We wrote in the bulletin that it didn’t exist anymore, but people kept donating to it.” One Sunday, a church leader came forward during worship and told those who’d operated the thrift store, “Well done, good and faithful servants.”

“People knew it was done because we did it in worship,” Mather said. “It took us three years to bury everything that was dead.”